Moran Samuel, who is guided by Italian coach, Paula Grizzetti, trains in both Italy and at the Daniel Rowing Center in Tel Aviv. 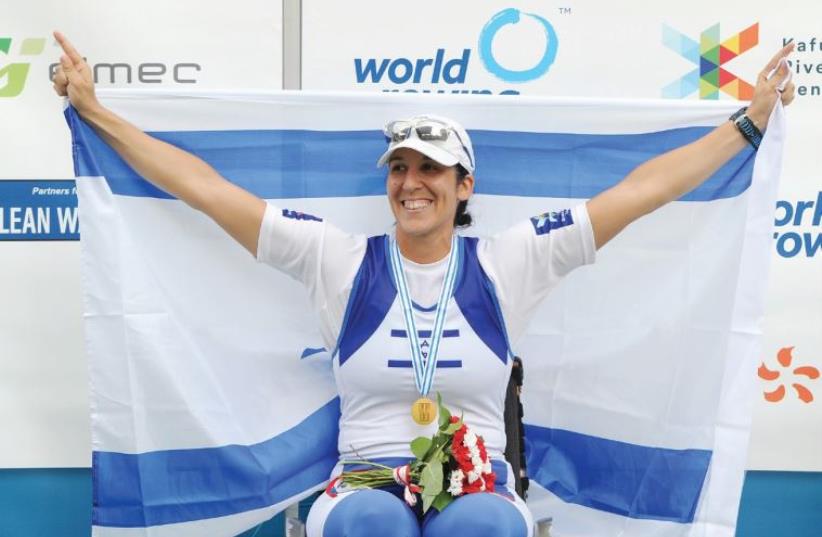 Israeli rower Moran Samuel claimed the gold medal in the arms-shoulders single scull 1,000-meter final at the World Rowing Championships in Aiguebelette, France
(photo credit: DETLEV SEYB)
Advertisement
Moran Samuel registered the biggest achievement of her career and solidified her place as one of Israel’s best medal hopes at next summer’s Rio Paralympics on Thursday, claiming the gold medal in the arms-shoulders single scull 1,000- meter competition at the World Rowing Championships in Aiguebelette, France.Samuel, who is guided by Italian coach, Paula Grizzetti, and trains in Italy and at the Daniel Rowing Center in Tel Aviv, registered a time of 5:25.92 minutes to finish in first place, just over a second ahead of Great Britain’s Rachel Morris, with previous world champion Birgit Skarstein of Norway crossing the line in third.“There were very tough weather conditions in this competition and the final was tight until the very end,” said the 33-year-old Samuel, who was paralyzed from the waist down in 2006.“All the hard work came down to one moment and everything fell into place. I’m delighted that I succeeded.”In the able-bodied competitions in Aiguebelette, Dani Fridman will be aiming to book his place at the Rio 2016 Olympics on Friday when he takes part in the men’s single sculls 2,000m semifinals.The Israel team in the mixed coxed four ended Thursday’s B final in fifth place, clocking a time of 3:41.48m to finish the event in 11th place overall.Tsofnat Levanon, Barak Hazor, Nissim Nir Mayo and Shay-Lee Shulmit Mizrachi, led by cox Danielle Renny Palatin, needed to end the competition in the top eight overall to secure an Olympic berth.Reuven Magnagey and Yuliya Chernoy qualified for the Rio Paralympics on Thursday after finishing the mixed double sculls in eighth place overall.