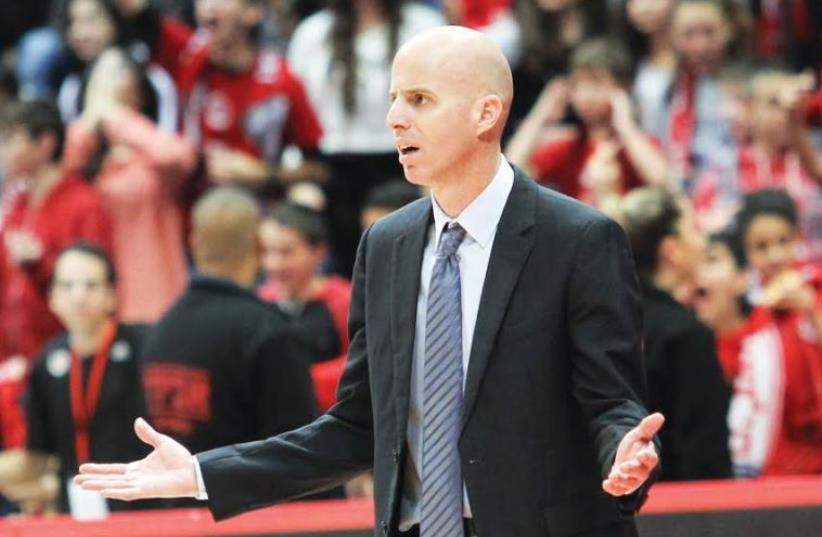 Hapoel Tel Aviv coach Danny Franco
(photo credit: DANI MARON/MAARIV)
Advertisement
Hapoel Jerusalem strengthened its hold on first place in the BSL standings in resounding fashion on Sunday night, crushing Maccabi Kiryat Gat 112-77 at the Jerusalem Arena to improve to 8-2.With one eye already on Wednesday’s crucial Eurocup showdown with AEK Athens, Hapoel was hoping for a comfortable clash on Sunday, especially after beating Maccabi Haifa in overtime two days earlier.The game could have hardly been any easier for Jerusalem, which opened a 16-point gap (33-17) by the end of the first quarter and never looked back.The margin mushroomed to 32 points (62-30) by halftime, allowing coach Danny Franco to rest his starters ahead of the encounter with AEK. Anything but a win over the Greeks at the Jerusalem Arena will officially end Hapoel’s hopes of advancing in the Eurocup.Josh Duncan led six Jerusalem players in double figures with 16 points on Sunday, with Yotam Halperin, Lior Eliyahu, Matt Janning, Tony Gaffney and D’or Fischer scoring 15, 14, 13, 12 and 10 points, respectively.“I felt this morning that we might be surrendering to fatigue, but I’m happy that we came out and won the game,” said Franco. “The guys deserve credit for doing their job professionally.”Franco knows there is little he can take from Sunday’s game ahead of the clash with AEK.“We have two days to prepare to the best of our ability,” he explained. “There is no need to say much to the players. We simply need to come out and play hard and aggressive basketball.”Ben Altit had 18 points for Kiryat Gat, which fell to 2-8 with its fifth straight defeat.“I didn’t think that things would look like this,” said Kiryat Gat coach Nati Cohen. “I think this was an embarrassing night. I really thought we could do more but I felt helpless.”Hapoel Tel Aviv got back on track with a 78-63 win over Hapoel Holon on Sunday. Tel Aviv had lost three of its past four games, all by five points or less.It took no chances on Sunday, opening a double-digit gap (22- 11) early in the second quarter before taking a 15-point margin (38-23) into the break. The final 10 minutes were no more than garbage time, with the hosts leading by 32 points (64-32).Raviv Limonad had 15 points for Hapoel, which improved to 4-6, with Tre Simmons scoring 11 on his debut.Will Clayburn netted 28 points for Holon, which fell to 3-6.On Monday, Maccabi Tel Aviv welcomes Hapoel Eilat and Ironi Nahariya visits Ironi Ness Ziona.Maccabi Rishon Lezion hosts Maccabi Haifa on Tuesday.