The team that finishes the regular season in first place will decide if the Final Four takes place in Tel Aviv or Jerusalem. 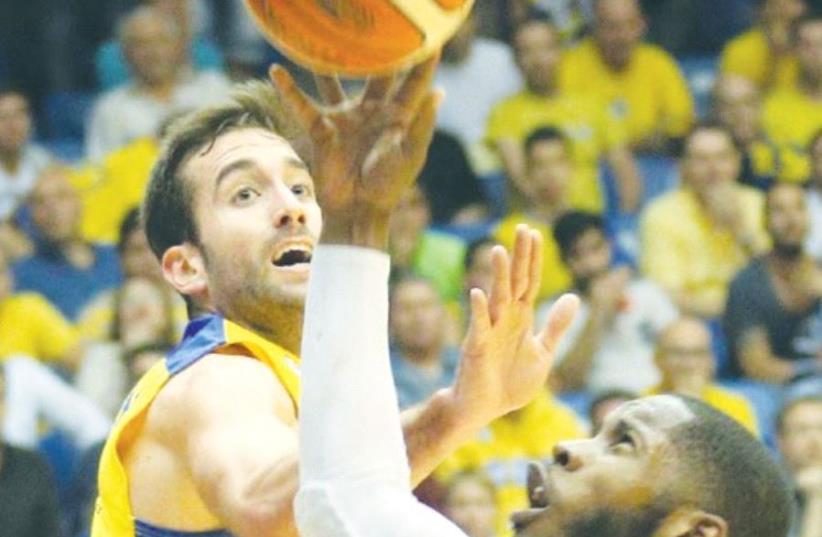 Hapoel Jerusalem guard Jerome Dyson (with ball) and Maccabi Tel Aviv guard Yogev Ohayon
(photo credit: ADI AVISHAI)
Advertisement
There will still be more than three months of BSL regular season games to play following Sunday’s showdown between Maccabi Tel Aviv and Hapoel Jerusalem. But the yellow-and-blue can nevertheless take a significant step towards securing home-court advantage in the season-ending Final Four tournament when it visits the Jerusalem Arena on Sunday night.Maccabi can open a four-and-a- half game lead over Jerusalem with a second victory of the season against its biggest rival, which would also ensure Tel Aviv would hold the head-to-head tiebreaker at the end of the regular season should both teams finish with the same record.The team that finishes the regular season in first place will decide if the Final Four takes place in Tel Aviv or Jerusalem.Tel Aviv improved to 13-3 in the BSL with last week’s 91-85 win over Maccabi Ashdod, while Jerusalem fell to 10-7 with an 85-79 loss against Hapoel Holon.However, it is Jerusalem which enters Sunday’s encounter brimming with confidence, securing its place in the Eurocup quarterfinals with an 84-77 triumph over Lietuvos Rytas Vilnius of Lithuania last Wednesday, its ninth win in 11 games over all competitions.Maccabi, on the other hand, dropped to its fifth defeat in nine games over all competitions on Thursday, losing 90-75 at Brose Bamberg in Germany to fall to a 7-14 record in the Euroleague.Maccabi coach Ainars Bagatskis will have just eight senior players at his disposal on Sunday after Sonny Weems was cut last week and Joe Alexander was suspended for elbowing Adam Ariel during the win over Ashdod.“We know everything about Hapoel Jerusalem. There are no secrets,” said Bagatskis.Maccabi leads the BSL with an average of 87.8 points per game, but Jerusalem has the league’s best defense, allowing only 74.9 points per contest, 69.2 in home games.“Every time Jerusalem and Maccabi Tel Aviv meet it is a big game,” said Jerusalem coach Simone Pianigiani.“We need to play like the underdog because we have some injured and tired players. This isn’t a final, but it feels like a final.”Elsewhere, Hapoel Holon beat Maccabi Rishon Lezion 92-77 on Saturday to improve to 13-5 with its fourth straight win, but may have lost star guard Khalif Wyatt for the season. Wyatt, the BSL’s top scorer, had to leave for the dressing room after just three minutes, with Holon fearing he suffered a serious knee injury. Jordan Taylor had 22 points and 10 assists for Holon, which controlled the encounter from start to finish.Shawn Dawson scored 21 points for Rishon, which fell to 9-9.