Jerusalem moves ahead in Eurocup quarters 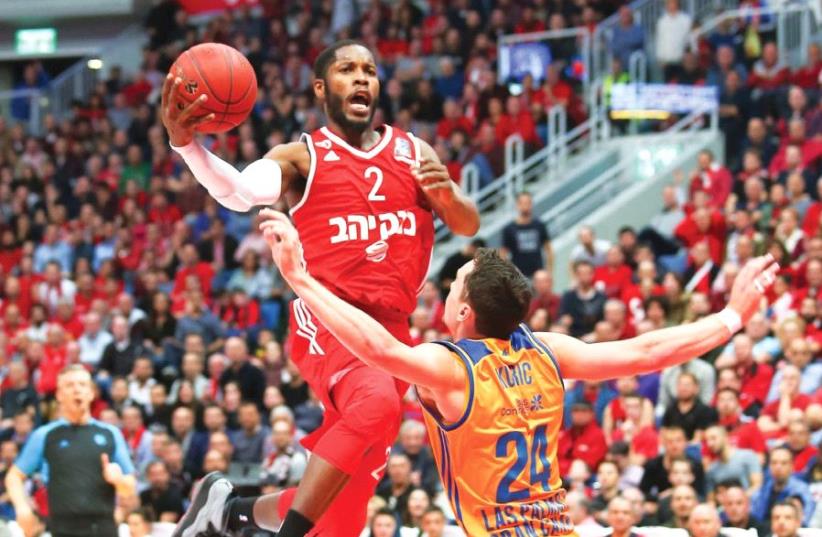 Hapoel Jerusalem guard Jerome Dyson (center) scored a game-high 20 points in last night’s 87-67 win over Gran Canaria and Kyle Kuric (24) in Game 1 of the Eurocup quarterfinals
(photo credit: DANNY MARON)
Advertisement
Hapoel Jerusalem’s hopes of winning the Eurocup title looked more realistic than ever on Tuesday night when it beat Gran Canaria of Spain 87-67 at the Jerusalem Arena in Game 1 of the best-of-three quarterfinal series.Jerusalem still needs one more win to reach the semifinals of the competition for the first time since 2006 and has a long way to go before it can start thinking about lifting the trophy for the second time in club history following the 2004 triumph.However, the level of performance on Tuesday, and the manner of the victory against an opponent considered to be among the favorites to go all the way, should give Jerusalem a major confidence boost in its continental quest.Hapoel led by as many as 10 points in the second quarter, but ultimately held only a onepoint edge (39-38) into the halftime interval. The hosts took a seven-point cushion (64-57) into the final frame and effectively clinched the win by the midway point of the fourth period, scoring 16 of the first 21 points to open an unassailable 18-point gap (80-62).Jerome Dyson led Jerusalem with 20 points, hitting four three-pointers, while also registering six assists. Amar’e Stoudemire and Tarence Kinsey netted 14 points each, with Brian Randle contributing 10 important points off the bench. Hapoel recorded a comfortable victory even though its top scorer Curtis Jerrells finished with only eight points on 3-of-13 from the field.“It feels good to win. Everything fell into place for us,” said Dyson.“This is a very important win for the club, but we can’t be too satisfied from it. Gran Canaria will look to take advantage of its home court on Friday the way we did tonight.”Bo McCalebb led Gran Canaria with 12 points, with the Spaniards hitting only 6-of-27 attempts from three (22.2%). Gran Canaria entered the game leading the competition in performance index ranking and as the Eurocup’s second-best scoring team (89.2 ppg). But it had no answer to Jerusalem’s defense on Tuesday and will look to make amends in Game 2 in Spain on Friday.If necessary, the decisive Game 3 will be played at the Jerusalem Arena next Wednesday.“There was a big difference between the two halves,” said Gran Canaria coach Luis Casimiro. “In the first half we played okay, no weak spots in offense or defense, but in the second half we played very bad on defense and allowed many easy baskets. We were bad on three-point shooting and in rebounding. Hapoel played very physical and that was a problem for us.”Hapoel got Game 1 off to a bright start, but the visitors responded with an 11-1 run to take a five-point advantage (13- 8). That ended up proving to be Gran Canaria’s biggest lead of the night, with the Spaniards holding a one-point gap (17-16) after one quarter.A 17-3 Jerusalem run, capped by a Dyson basket, gave the hosts their first double-digit gap of the night (34-24) with just under four minutes to play in the first half. But McCalebb would outscore Hapoel by himself in the remainder of the period, with his six points helping bring Gran Canaria to within a single point at the break (39-38).The visitors tied the score early in the third quarter, but Jerusalem found its range from beyond the arc and a Dyson three took Hapoel’s margin to double figures (54-43) yet again. The Spaniards limited the damage until the end of the frame, closing to within seven points, but would come no closer. Jerusalem hit the ground running in the fourth period, surging ahead to move to within a win of the semifinals.