Elsewhere, Meir Tapiro looks set to make a seamless transition to coaching in the coming days, with Maccabi Ashdod interested in the services of the 41-year-old who retired two weeks ago. 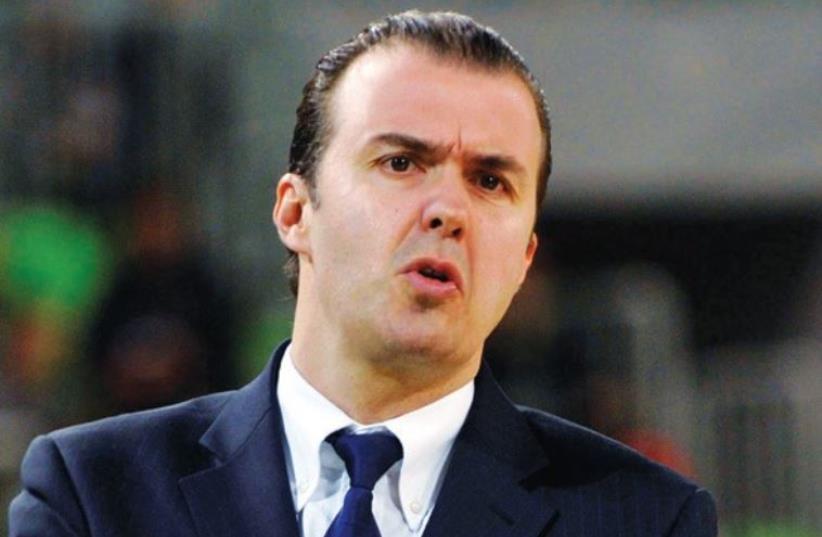 Hapoel Jerusalem made a statement by naming Italian Simone Pianigiani as its new head coach this week.
(photo credit: REUTERS)
Advertisement
The summer of change at Hapoel Jerusalem got off with a bang on Sunday night with the appointment of Italian Simone Pianigiani as the new head coach.The 47-year-old will replace Danny Franco at the helm after Jerusalem lost in a shocking defeat to Maccabi Rishon Lezion in the BSL final.Former Maccabi Tel Aviv and Jerusalem coach Pini Gershon, Hapoel Holon coach Dan Shamir, who has also guided Jerusalem in the past, and Guy Goodes, another former Maccabi and Jerusalem boss, were among the candidates to replace Franco. However, Jerusalem opted instead to hire an Italian once regarded as one of the up-and-coming coaches in Europe. Pianigiani rose to stardom at Montepaschi Siena, winning six consecutive Italian championships between 2007 and 2012 while reaching the Euroleague Final Four on two occasions.He was hired as the coach of the Italian national team in 2009, guiding it for six years.Pianigiani’s last club position was at Fenerbahçe Ulker in Turkey where he was given a lucrative two-year deal estimated at almost five million euro in 2012. However, he didn’t even complete a single season in Istanbul, leaving in February 2013 due to health reasons.Pianigiani lost his job with the national team after Italy finished last summer’s EuroBasket tournament in sixth place, failing to qualify for Rio 2016. Pianigiani’s Italy thrashed Erez Edelstein’s Israel 82-52 in the round of 16, and the two will renew their rivalry as the respective coaches of Hapoel Jerusalem and Maccabi Tel Aviv next season.With Pianigiani’s stock plummeting in recent years, Jerusalem was able to sign him for an estimated $650,000 and will be counting on him to overhaul the roster as it looks to regain the BSL title and finally succeed in continental competition.Jerusalem has reached the Eurocup quarterfinals only once in the past six seasons, barely progressing to the Last 32 last season in which it lost all six of its games.The only players who seem certain to continue for another campaign are Israelis Yotam Halperin, Lior Eliyahu, Bar Timor and Rafi Menco. American guard E.J. Rowland could be back as well, while forward Donta Smith looks to be on his way out following Pianigiani’s appointment.Elsewhere, Meir Tapiro looks set to make a seamless transition to coaching in the coming days, with Maccabi Ashdod interested in the services of the 41-year-old who retired two weeks ago.Tapiro played for 21 years in the top flight, making his debut for Hapoel Tel Aviv in the 1994/95 season. He set a new appearance record for a player in the top flight in 2014/15 and is regarded as one of the greatest guards in Israeli basketball history. Tapiro played for 10 different Israeli clubs during his career, including Ashdod which he helped to the league final in 2012, but won just one local title, claiming the State Cup with Hapoel Jerusalem in 2007.