Jerusalem ties series with Nahariya at 2-2 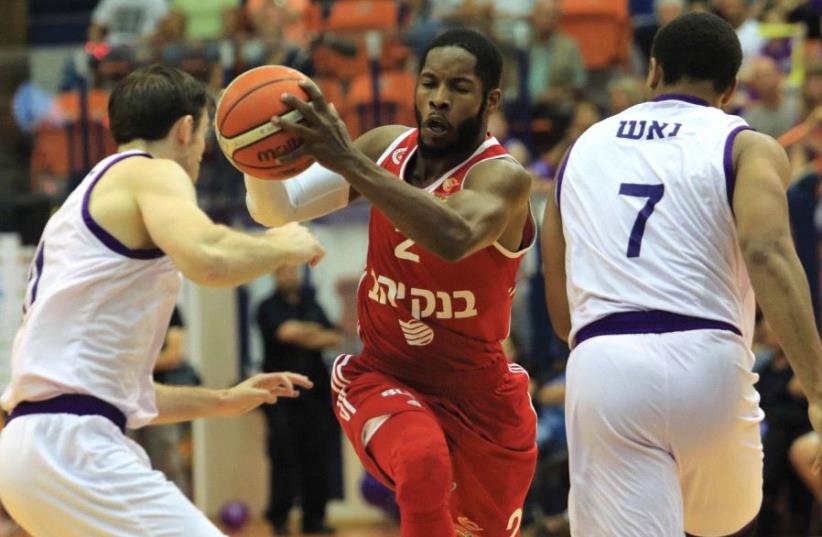 Hapoel Jerusalem guard Jerome Dyson (center) had nine points in last night’s 74-72 win at Ironi Nahariya
(photo credit: ERAN LUF)
Advertisement
Hapoel Jerusalem can advance to the BSL Final Four with a home win in a decisive Game 5 in the quarterfinal playoffs after surviving a massive scare to defeat Ironi Nahariya 74-72 on the road on Monday to tie the series at 2-2.Hapoel breathed a huge sigh of relief after Derwin Kitchen missed a three-pointer at the buzzer, meaning the berth in next week’s Final Four tournament will be decided in Jerusalem on Thursday.Jerusalem will be aiming to become the third team to come back from a 2-0 hole in BSL playoff history. Hapoel Eilat did so against Maccabi Tel Aviv two years ago after Maccabi Rishon Lezion became the first versus Ironi Ashkelon in 2012.Curtis Jerrells led Jerusalem with 20 points, with Tarence Kinsey scoring 19.Scotty Hopson had 18 points for Nahariya.Both teams seemed tense at the start of Game 4, combining for 3-of-14 from the field in the first four minutes. Jerusalem was the first to open a significant lead, moving ahead by eight points (28-20) in the second quarter following five straight points by Bar Timor.Two consecutive three-pointers by Jerrells took Hapoel’s gap to double-digits (39-29) for the first time. Hopson kept the hosts in touch, scoring all eight points in an 8-0 run that brought Nahariya to within two points (41-39) before Jerrells hit another basket from beyond the arc to give Jerusalem a five-point advantage (44-39) at the break.The start of the second half belonged to Kinsey, who hit two straight triples to extend Hapoel’s margin to 13 points (52- 39). Nahariya never lost hope, going on a 9-0 surge to cut the deficit to three points (54-51) before entering the final 10 minutes down by only four points (63-59).Points were hard to come by for both teams in the fourth frame, setting up a tight finish. A Derwin Kitchen jumper with 2:30 minutes remaining gave Nahariya its first lead (72-71) since the first basket of the night.But the hosts wouldn’t score again, with Jerusalem moving back in front and tying the series after Kitchen missed a three at the buzzer.In other basketball news, Danny Franco was announced on Monday as the new head coach of Hapoel Tel Aviv. The 43-year-old, who guided Hapoel Jerusalem to the BSL title in 2014/15 and also won a State Cup with Hapoel Holon in 2009, worked as a TV analyst this season after his contract at Jerusalem wasn’t renewed following a surprise defeat to Maccabi Rishon Lezion in the league final last year.“I’m very happy to be back at Hapoel Tel Aviv, the place at which I started my coaching career,” said Franco, who began his coaching life as an assistant coach at Hapoel.Elsewhere, Maccabi Tel Aviv chairman Shimon Mizrahi promised in a letter to the club’s season-ticket holders that the mistakes made this season will not be repeated.The letter listed a number of changes that will be made ahead of 2017/18, including a guarantee that the club’s ownership will no longer meddle in professional matters.“The top professional authority will be the coach together with the sport director, and the responsibility for building the roster will rest only on their shoulders,” Mizrahi’s letter read.