The Giro d’Italia, which takes place annually, is watched by hundreds of millions of viewers in 194 countries.

By JERUSALEM POST SPORTS STAFF
SEPTEMBER 18, 2017 15:49
The winner of the 100th Giro d'Italia, Tour of Italy cycling race, Netherlands' Tom Dumoulin holds the trophy on the podium near Milan's cathedral after the last stage on May 28, 2017.
(photo credit: AFP PHOTO)
Advertisement
The world-famous Giro d’Italia, one of cycling’s three grand tours, will begin in Jerusalem next May, before continuing with stages between Haifa and Tel Aviv and Beersheba and Eilat, it was officially announced on Monday.It will be the first time one of cycling’s three historic grand tours will break ground beyond Europe and will arguably be the most prestigious sporting event ever held in Israel.Government ministers from Israel and Italy, the Mayor of Jerusalem, race officials and some of the biggest names in world cycling gathered in Jerusalem on Monday to launch the ‘Big Start’ to the 2018 Giro.The race will begin on May 4, with 176 of the world’s top cyclists to get the competition under way against the backdrop of Jerusalem’s Old City.The Giro d’Italia, which takes place annually in Italy over 21 stages during a three-week period, is watched by hundreds of millions of viewers in 194 countries. Next year’s race will be the 101st edition of the Giro. 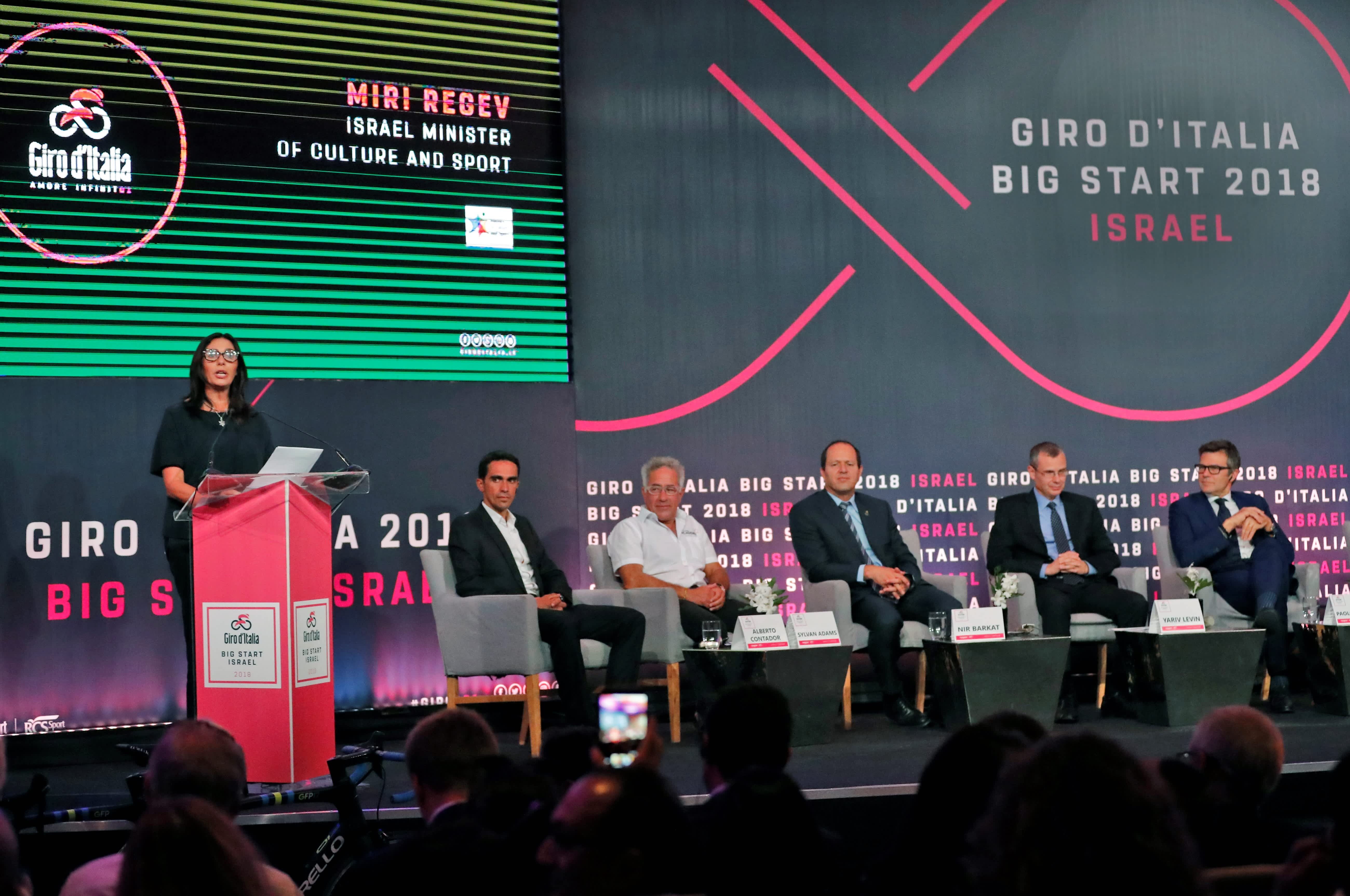 Israel's Minister of Culture and Sport Miri Regev (L) speaks during a press conference in Jerusalem on September 18, 2017, to give details of the opening stages of next year's Giro d'Italia. (AFP Photo)Since 2006, the Giro has commenced every other year with a high-profile “Big Start” outside Italy. Previous “Big Starts” have brought the Giro to Holland, Denmark, Northern Ireland and Belgium.Next year’s “Big Start” in Israel will be the first time the Giro, the Tour de France or the Vuelta a Espana has been held outside Europe.The dignitaries at the launch event in the Waldorf Astoria, Jerusalem included Italy’s Sports Minister Luca Lotti, Israel’s Sports and Culture Minister Miri Regev, Israel’s Tourism Minister Yariv Levin, Jerusalem Mayor Nir Barkat and cycling legends Alberto Contador and Ivan Basso.Also in attendance was Honorary President of “Big Start Israel” Sylvan Adams, who is the driving force behind the development of Israeli cycling and bringing the Giro to Israel.“This historic ‘Big Start’ of the 101st edition of the Giro is about showcasing our country to 100’s of millions of TV and live spectators: our beautiful outdoor scenery, sharing our history, our culture, and most of all our people, in this diverse, free, pluralistic and fiercely democratic society,” said Adams.“Let me personally invite you (and 800 million of your cycling friends) to travel here and experience the Giro in Israel. If you’ve never visited before, you will be amazed by this special place. For returning visitors, come join the celebration, which may very well be Israel’s biggest ever outdoor party.“This is a project about Zionism,” added Adams. “About inviting 800 million TV viewers to come see our country. The beauty of cycling is that it is outdoors and it will allow us to show the country. How else could we dream about having so many people come and see our normal Israel, the Israel they don’t necessarily read about every day in the newspaper.”
Giro d'Italia 2018 - Stage 1 by giroditalia Day 1 will see riders begin the race against the backdrop of Jerusalem’s iconic Old City with a 10.1 kilometer time-trial tour of the city.Day 2 begins at the scenic Baha’i Gardens in Haifa, then passing through historic Acre and Caesarea, before riders head to the finish line on Tel Aviv’s beachside promenade, totaling 167km.Day 3 begins in Beersheba and takes in southern Israel’s most dramatic scenery including the breathtaking Ramon Crater, before finishing in Eilat, totaling 226km.Ensuring three smooth days of cycling will require an unprecedented logistical operation, involving government bodies and other official agencies. In addition to the competitors, officials and world media, tens of thousands of tourists and cycling enthusiasts are expected to arrive in Israel to experience the Giro d’Italia.The race will be a major boost for cycling’s growing popularity in Israel. The country’s only professional team, the Israel Cycling Academy, founded in 2014, currently competes on the UCI Continental circuit and is hoping to receive a wild-card for the 2018 Giro.“It is our great privilege, to be a host country for a sporting event so great and important,” said Minister of Culture and Sport, Miri Regev. “I call on you, all lovers of the race, to come here to Israel.“This cycling tour across the Holy Land will become a fascinating journey through time covering thousands of years. I’m sure it will be a thrilling experience for everyone.”Jerusalem Mayor Nir Barkat said: “We are proud to host one of the biggest and most prestigious sports events in the world, and the biggest sporting event ever held in Israel, here in the city of Jerusalem. Hundreds of millions of viewers around the globe will watch as some of the world’s best cyclists ride alongside the walls of Jerusalem’s ancient Old City and our historic sites.“Our message to the world is clear: Jerusalem, the capital of the State of Israel, is open to all.”Alberto Contador, a two-time winner of the Giro and of the Tour de France, raced professionally for the last time last week, but is nevertheless looking forward to seeing the Giro arrive in Israel.“It is very good for the world of cycling to start the Giro out of Europe,” said the Spaniard. “I was here in 2012 and saw the country. I am sure that it will be great and a very good opportunity for the people of Israel and the world to see this incredible event.”Contador believes next year’s participants won’t have too many concerns regarding the security situation in Israel.“The situation in the world is a little crazy at the moment and it isn’t just in one country but all the world,” he explained. “I’m sure the riders will be happy with the security situation. I think it will be a very good opportunity for them to experience a different country and different cultures.”Next year’s race will also be used as an opportunity to pay tribute to legendary Italian cyclist, Gino Bartali, a three-time winner of the Giro d’Italia. Bartali helped rescue hundreds of Italian Jews during the Holocaust and was recognized by Yad Vashem in 2013 as Righteous Among the Nations.“The start from Jerusalem is a metaphorical bridge between our two lands, made up of history, culture and traditions,” said Luca Lotti.“There is another aspect that makes me particularly proud: the fact that this edition of the Giro d’Italia will celebrate the memory of the great Gino Bartali. It is beautiful that he is remembered right here in Jerusalem because the great ‘Ginettaccio’ – as he was named by his fans and all his fellow sportsmen who loved and followed him – was not just a great champion of sport. He was also an extraordinary champion of life, and a man of heroic virtues, and this needs to be commemorated, and shared, especially with the younger generations… never to be forgotten.”