Ágnes Keleti, a retired Hungarian-Israeli Olympic and world champion artistic gymnast and coach, is considered the all-time most decorated Jewish gymnast in the world. 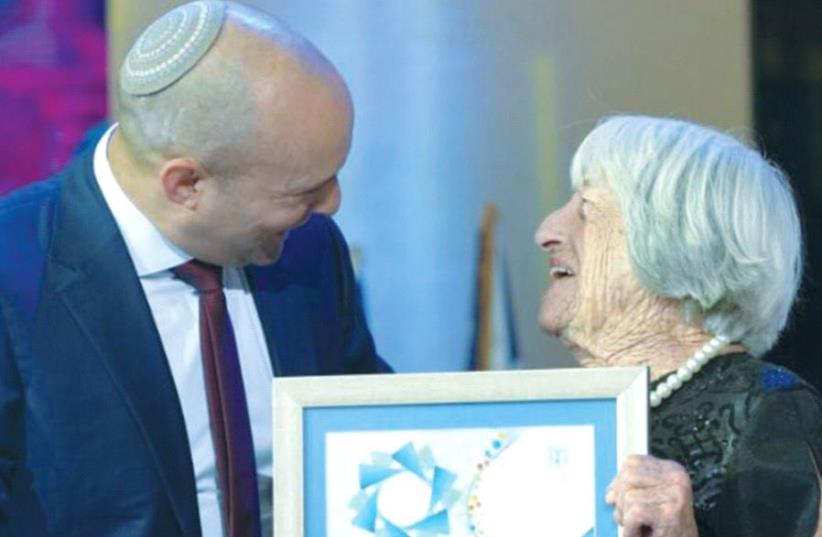 AGNES KELETI receives the Israel Prize from Education Minister Naftali Bennett in Jerusalem
(photo credit: SHLOMI AMSALEM)
Advertisement
Starting this year, Israel's championship for artistic gymnastics for women will bear the name of appraised Jewish Olympic gymnast Ágnes Keleti in honor of her upcoming 100th birthday celebrated on January 9.
Keleti, a retired Hungarian-Israeli Olympic and world champion artistic gymnast and coach, is considered the most decorated Jewish gymnast in the world of all time. She won a whopping 10 Olympic medals competing for Hungary's national team, where she was born and raised.
During the world championship in Rome in 1954, Keleti was recognized as the world champion in the parallel bars floor apparatus. Then, in 1957, when she was 36 years old, she arrived in Israel for the fifth event of the World Maccabiah Games and decided to make aliyah following the tournament.
Moving to Israel did not mean putting her passion on hold, and three years later, in 1960, Keleti led the Israeli Olympic team of three gymnasts to the Olympic Games in Rome. Later, she also established the first Israeli national team for gymnastics shows for entertainment that represented Israel in various shows around the world starting in 1964. In 2017, Keleti won the Israel Prize in the category of Sport and Physical Culture.
Leading young Israel in the previously undeveloped field and putting it on the map has made Keleti a hero for Israeli gymnasts and athletes ever since. Naming Israel's artistic gymnastics championship for women after Keleti was the result of efforts made by one of her very first students in Israel during the 60s – Chaya Halperin.
"Beyond her being a coach, she was a person with strong morals. She loved Israel, and was a genius when it came to health. She was unique in her rhythmic and musical movement, and was a great teacher who trained dozens of teachers and coaches in the field of gymnastics in Israel," Halperin said, explaining what brought her to contact the Israel Gymnastics Federation, as well as Keleti's family members in Hungary, in order to turn the gesture into a reality.
Gili Lustig, director-general of Israel's Olympic Committee added that the decision to honor Keleti wasn't hard, saying: "Ágnes Keleti is an appreciated figure in the international Olympic community and in Israel for many years. She will be celebrating her 100th birthday this week, and we all wish her a long life. Her great achievements as an athlete and her important work for many years since making aliyah in 1957 to promote the field of artistic gymnastics will play a role in artistic gymnastics for generations to come."
Keleti herself expressed gratitude for the decision to acknowledge her life-long contribution to the field of gymnastics in Israel.
"I'm feeling very honored and happy to know that my work bears fruit and is acknowledged after many years of activity ... I wish all the best to our young gymnasts and to the future generation. Stay strong," Keleti wrote.