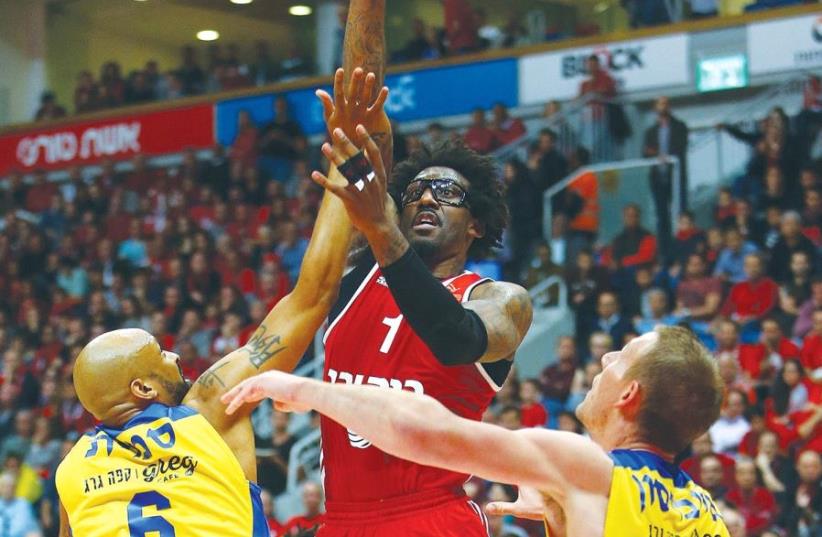 Hapoel Jerusalem center Amar’e Stoudemire (center) scores two of his eight points during last night’s 65-57 win over Maccabi Tel Aviv at the Jerusalem Arena
(photo credit: UDI ZITIAT)
Advertisement
Hapoel Jerusalem returned to winning ways on Saturday night, snapping a run of three straight BSL defeats while extending Maccabi Tel Aviv’s record losing streak.Both teams entered the showdown on the back of three consecutive losses in local league action and were in desperate need of a win.Jerusalem climbed back into the top eight with the 65-57 victory, opening a one-game lead in the battle for playoff qualification.Maccabi lost a record seventh straight game over all competitions, including three defeats to finish the Euroleague regular season, and sits in third place in the standings, one game back of leader Hapoel Holon and behind Hapoel Eilat on a tiebreaker.There was nothing to separate the teams entering the final 10 minutes (42-42), but Jerusalem got the fourth quarter off to the better start and never looked back. After being suspended from a training session last week following a clash with the coaching staff, Lior Eliyahu scored seven points in just over three minutes in the final frame and Yotam Halperin’s three-pointer to beat the shot-clock buzzer with 46 seconds remaining in the contest opened a six-point gap (63-57) and secured the win.Eliyahu led Jerusalem with 14 points and 12 rebounds, while Gal Mekel scored 22 points for Maccabi.On Friday, Maccabi Kiryat Gat was relegated to the National League with six games still to play, falling to a 4-23 record with an 82-79 loss to Hapoel Gilboa/Galil.Michael Qualls finished with 19 points for Gilboa, which improved to 12-15 and remained alive in the playoff race. Justin Carter scored 21 points for Kiryat Gat.In other news, the Israel Basketball Association attacked the Anti-Doping Committee of Israel and its chairman Shaul Schreiber after he claimed it acted unlawfully when it allowed Ironi Nahariya’s American center Yancy Gates to play in Thursday’s BSL game against Maccabi Rishon Lezion.Gates was suspended on April 4 after the Anti-Doping Committee of Israel notified the IBA that he failed a drug test he was given after a game against Hapoel Tel Aviv on February 19, testing positive for THC, a substance associated with the use of marijuana. Gates faced an Anti-Doping Committee hearing two days later in which he claimed that he failed the test due to his use of pain killers. The members of the committee asked to receive medical evidence, which was provided three days later in the form of a letter written by a specialist at the Bnai Zion Medical Center.According to the IBA, it tried to get in touch with the Anti-Doping Committee’s prosecutor Carmel Naftali time and again from Sunday and after receiving no answer, decided to allow Gates to play on Thursday as he hadn’t even been officially charged for the failed test.In a statement to the media, which the IBA said it had no previous information of, Schreiber said Gates’s hearing was still ongoing and that the Anti-Doping Committee didn’t authorize his return to action.Schreiber said the IBA, Nahariya and Gates could all face additional charges, while claiming that Gates’s explanation for the failed test was inaccurate and that the results clearly showed that he had cannabis in his system.