She went from being a professional basketball player looking forward to a bright career to a bed at the Beit Levinstein Rehabilitation Center facing a long and arduous rehabilitation process. 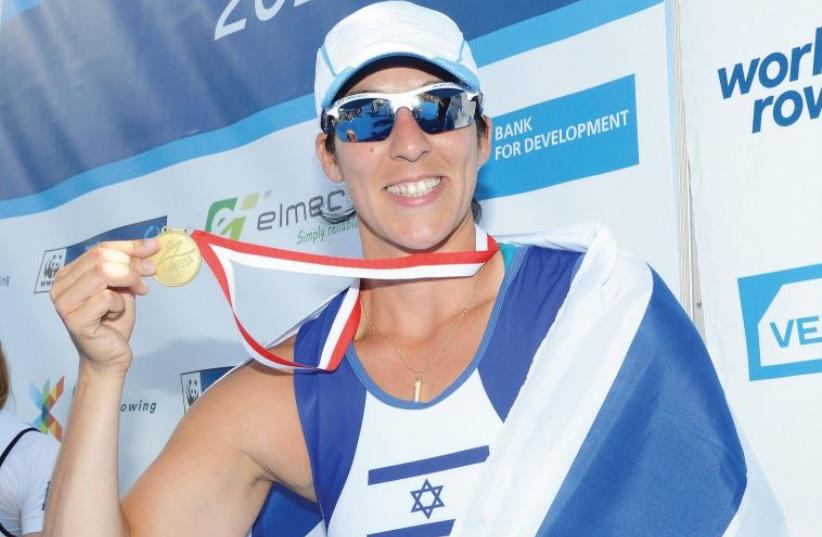 MORAN SAMUEL garnered more than 90 percent of the readers’ votes to earn the honor of 'The Jerusalem Post' Israeli Sports Personality of 2015
(photo credit: DETLEV SEYB)
Advertisement
Moran Samuel didn’t just lose sensation from the waist down when she was struck by a rare spinal stroke originating from a congenital disorder back in 2006. She also lost her sense of self and sense of purpose.She went from being a professional basketball player looking forward to a bright career to a bed at the Beit Levinstein Rehabilitation Center facing a long and arduous rehabilitation process.She never gave up though. For three years she did all she could to stay away from a basketball court. However, she never felt sorry for herself.Samuel ultimately returned to wheelchair basketball before channeling her ambition to rowing. She is now a world champion.It should therefore be of little surprise that Samuel brushed aside all competition on the way to being selected as The Jerusalem Post Israeli Sports Personality of the Year. The 34-year-old follows in the footsteps of previous winners: basketball coach David Blatt (2014), judoka Yarden Gerbi (2013), Paralympic gold medalist Noam Gershony (2012), windsurfer Lee Korzits (2011), Shahar Pe’er (2007, 2010), Omri Casspi (2009) and Paralympic swimmer Inbal Pezaro (2008).Samuel won by an overwhelming margin ahead of Casspi, Blatt, Eran Zahavi and Hanna Knyazyeva-Minenko.Samuel registered the biggest achievement of her career this year and solidified her place as one of Israel’s best medal hopes at next summer’s Rio Paralympics, claiming the gold medal in the arms-shoulders single scull 1,000- meter competition at the World Rowing Championships in Aiguebelette, France.Samuel also broke the world record and her success was recognized internationally, with the Israeli being selected as the 2015 World Rowing Para Athlete of the Year.“I feel a great honor just to be nominated and of course to actually win,” Samuel told The Jerusalem Post. “It gives me a real boost as an athlete. I work very hard every day, alone in the boat, so to know that people are watching me and maybe I inspire them or bring them joy by representing Israel and reaching these achievements is really important.”Samuel spoke about the significance of her selection.“It shows that they see me as an athlete. They say my name in the same breath as athletes who don’t have any physical limitation. That is really the way it should be,” she explained. “To see the person and only afterwards to see his limitation or anything else. In my case it is to treat my achievements just like those of any other professional athlete.”Samuel, who is an accomplished physiotherapist and is invited to lecture across the country, could afford to become a full-time athlete thanks to the financial support of the Altshuler Shaham Group and the significant help she receives from the Daniel Rowing Center, the Israel Paralympic Committee and the Zahal Disabled Veterans Organization.It took a joint venture between the Athena project, the national council for promoting women’s sport in Israel, and the Israel Sports Association for the Disabled to reestablish a women’s wheelchair basketball team in 2009, to get Samuel back on court.She was told that if she wanted to reach the top she should try an individual sport and she certainly doesn’t regret that decision.“I’m not afraid of trying something new. I believe that if you don’t try you lose twice. First you lose the chance to succeed and secondly you lose the chance to learn something,” she explained.Samuel is guided by Italian coach Paula Grizzetti and Dima Margolis in Israel, and after finishing fifth at the London Olympics, she is targeting gold in Rio next summer.“My goal is to repeat my accomplishment from the world championships. I think that I should remain in first place and I think that I can do it,” she said before explaining the importance of sport in her recovery.“It brought me back the best thing possible which is the sense of efficacy,” she noted. “I always saw myself as a successful person with self-confidence, but I lost something very valuable and big which was the sense of efficacy regarding my body. But sport brought that back to me. I think that is something sport gives in general to disabled people. It cancels their disability. It makes them feel amazing and that they can do anything despite their disability.”