Kenyan-born runner going the distance for Israel at the Olympics

Lonah Chemtai gained Israeli citizenship earlier in 2016 through her coach, Dan Salpeter, after the two married in Kenya. 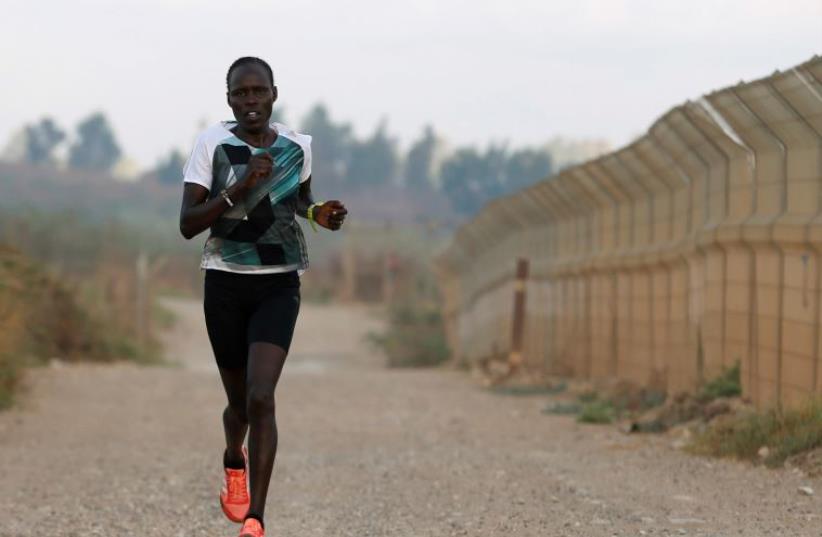 Lonah Chemtai will represent Israel in the women's marathon at the 2016 Rio Olympics. Picture taken July 14, 2016
(photo credit: REUTERS/BAZ RATNER)
Advertisement
When Kenyan-born Lonah Chemtai came to Tel Aviv in 2009 to care for the children of her country's ambassador to the Jewish state, she never dreamed that one day she would run for Israel at the Olympics.Chemtai, a diminutive 27-year-old and a marathon novice, gained Israeli citizenship earlier this year through her coach, Dan Salpeter, after the two married in Kenya. They will be in Rio next month but a podium finish is not expected.The unassuming athlete's inclusion in the Israeli team was confirmed only at the last minute after she was granted Israeli citizenship days before the deadline for her to be eligible to run for Israel.It was a momentous day for Chemtai, who described the ceremony at which she was presented with her documents as "a great occasion.""I am very proud (to represent Israel) and I hope to achieve a new personal best time," she told Reuters.Chemtai, who grew up in a village in West Pokot County in western Kenya, had run shorter distances since her youth and took up the marathon only after the birth of the couple's son, Roy, who is 19 months old.Despite a current personal best time of two hours, 40 minutes, which is far slower than the fastest runners, Chemtai's best is still ahead of her, said Salpeter."A personal best in Rio very much depends on the conditions, which can change from day to day, so it's hard to know ... But Lonah still has tremendous potential to improve greatly over the next 10 years and even beyond," Salpeter said.HUMID HOME CONDITIONSRunning on dirt tracks and roads around fields and citrus groves in Israel's agricultural heartland in the center of the country, where heavy humidity prevails in summer is hard, Chemtai said. Kenyan conditions are more suitable."I prefer training in Kenya but I have to follow what the coach says," she said with a chuckle. "In Kenya there are a lot of (running) partners and there is high altitude, not like here."Chemtai said running the marathon "is not hard" for her, but after Rio she wants to concentrate on track events and hopes to be able to run in the 10,000 meters at the Tokyo Games in 2020.Numbering at least 47 athletes, Israel's team for Rio is its largest-ever Olympic delegation.The Israeli team is hoping to win more than one medal to offset the disappointment of London 2012, where they left empty-handed.Israel won its first Olympic medals in Barcelona in 1992 in judo and had at least one athlete on the podium at every subsequent Games until 2012.