In 2014, Kraft also penned a heartfelt letter of condolence to the family of Max Steinberg, a Golani unit American soldier who was killed in Gaza. 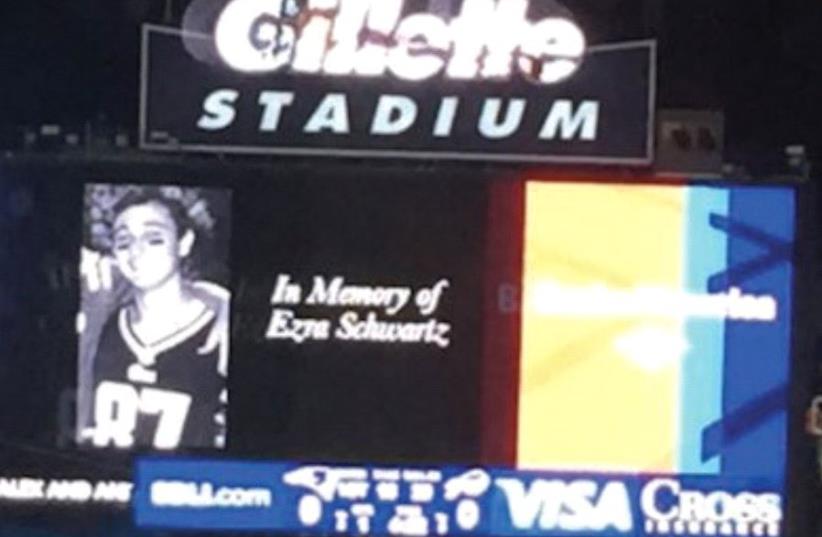 EZRA SCHWARTZ being honored with a moment of silence at a New England Patriots game in 2015.
(photo credit: Courtesy)
Advertisement
As first reported by Only Simchas News, and as relayed by Rachel Deri, the aunt of Ezra Schwartz – the Boston-area 18-year-old yeshiva student who was killed in a Gush Etzion terror attack in late 2015 – New England Patriots owner Robert Kraft reached out to the Schwartz family and hosted them as his VIP guests at Super Bowl LI last weekend in Houston.Ezra’s parents, Ari and Ruth Schwartz and their kids, Mollie, Hillel, Elon, and Avi, were all pictured at the Super Bowl in full Patriots’ garb, with Deri sharing a picture on Facebook that she called “bittersweet” because it was “without Ezra.”This is not the first time that Robert Kraft has shown his compassion for the Schwartz family.In November 2015, the week Ezra was killed, Kraft paid special tribute to him when he issued a moment of silence and at a Patriots “Monday Night Football” game that was watched by 15 million viewers, and then paid a personal shiva call to the Schwartz family the following night.In 2014, Kraft also penned a heartfelt letter of condolence to the family of Max Steinberg, a Golani unit American soldier who was killed in Gaza.