National team coach still has backing of IFA • Blue-and-white loses ground, but remains ahead of Albania. 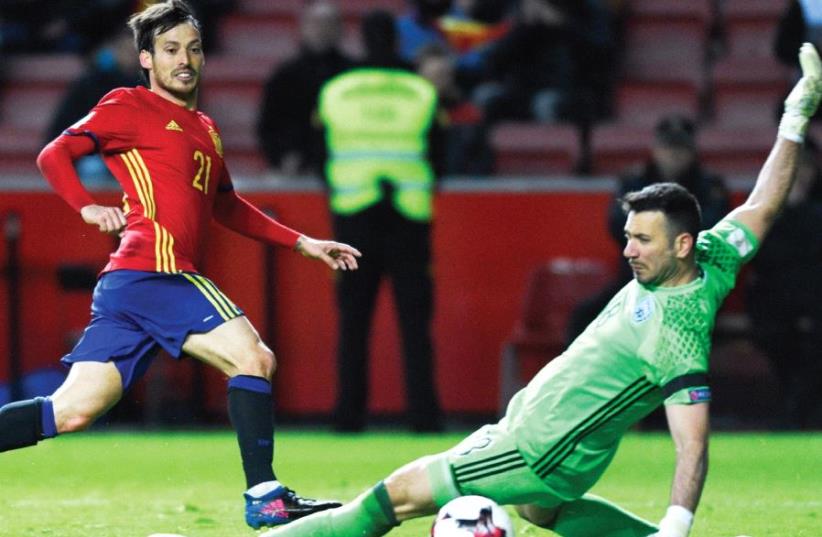 Spain midfielder David Silva (left) scores the opener in Friday’s 4-1 win over Israel in 2018 World Cup qualifying in Gijon with a low shot through the legs of blueand- white goalkeeper Ofir Marciano
(photo credit: REUTERS)
Advertisement
Despite a disappointing 4-1 loss against Spain on Friday night, Israel Football Association chairman Ofer Eini said national team coach Elisha Levy is set to continue and guide the side for at least one more campaign.While Israel wasn’t expecting to beat group leader Spain in Gijon, it was hoping for a better showing, entering the match only one point back of the hosts and Italy in 2018 World Cup qualifying Group G.Manchester City playmaker David Silva put Spain ahead in the 15th minute with a low shot through the legs of goalkeeper Ofir Marciano while Vitolo doubled the lead on the stroke of halftime just after Israel had squandered a chance to level, with Lior Refaelov’s header being denied by goalkeeper David De Gea.Chelsea striker Diego Costa scored a fourth international goal in four games to put Spain 3-0 up early in the second half with a header from a corner although Refaelov made amends for his earlier miss by pulling one back in the 76th minute of the encounter.Isco then restored Spain’s three-goal advantage in the 88th minute, rolling the ball into the near corner to complete a sweeping counter started by a burst forward from Costa from the halfway line.Spain is top of Group G with 13 points from five matches, ahead of Italy, which beat Albania 2-0, on goal difference. Israel remained third on nine points, three ahead of Albania.Israel’s next qualifier will be against Albania in Haifa on June 11, a match which could very well decide third place in the group.Only the winners of each group will qualify automatically for Russia 2018, while the eight best runners-up will advance to home-and-away playoffs.A third-place finish could help Israel improve its seeding ahead of Euro 2020 qualifying.Regardless, the blue-and-white will have a much better chance of advancing in its next campaign, with 24 teams to progress to the continental finals.Levy’s current contract only runs until the end of the 2018 World Cup qualifying campaign, but Eini has been impressed with the coach’s job to date and wants him to continue for at least two more years and try and guide the side to the European Championships.“We always knew it would be very difficult to finish ahead of Italy and Spain. If we end the group in third place that will be a very good result for us,” said Levy. “We beat Macedonia and Albania on the road and third place is our real target.“Levy is a methodical coach with a lot of motivation. As far as I’m concerned he is here for the long run,” added Eini. “This campaign is to prepare the team for the next one. I really believe in Elisha. If it’s up to me, he will continue for another campaign.”Levy was unhappy with the team’s performance in Gijon, although he conceded that Israel was always facing a nearly impossible task.“We saw why Spain is one of the best teams in the world,” said Levy.“We decided to try and attack and added a striker during the match and even managed to reach quite a few chances. But that is no consolation. It looked like Spain was playing with more players than us. In hindsight I may have made some mistakes with my team selection, but those were my decisions and we lost as a team.”