Lots of pride on the line in State Cup final

Tel Aviv is still licking its wounds from dropping the Premier League championship after three years. 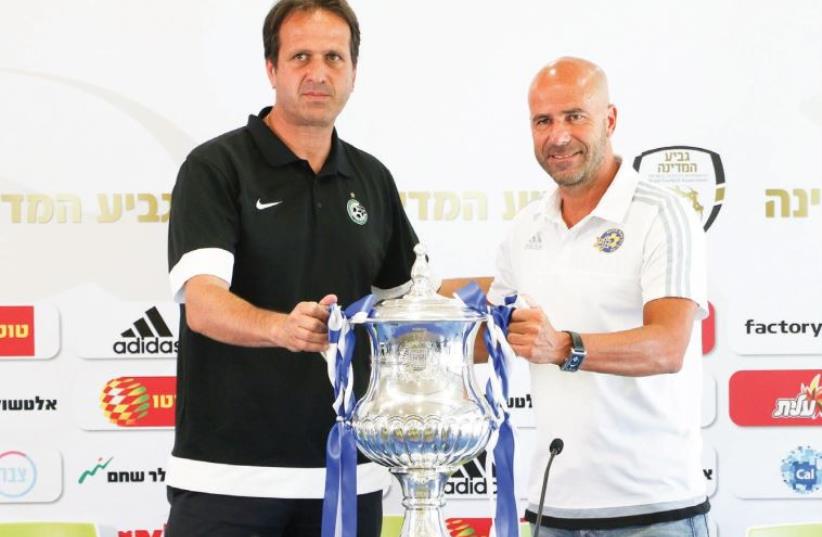 Maccabi Tel Aviv coach Peter Bosz (right), and Maccabi Haifa coach Roni Levy
(photo credit: DANNY MARON)
Advertisement
The State Cup final at Teddy Stadium in Jerusalem on Tuesday night presents both Maccabi Tel Aviv and Maccabi Haifa with a chance not only to end the season on a sweet note, but to completely change the way their campaigns will be remembered.Tel Aviv is still licking its wounds from dropping the Premier League championship after three years, finishing in second place, two points back of Hapoel Beersheba, despite Saturday’s 6-0 victory over Maccabi Haifa.After winning an unprecedented treble last season, claiming the Toto Cup as well as the State Cup and championship, the yellow-and-blue is in danger of ending this season empty-handed.Such a scenario, even when considering the team reached the Champions League group stage for just the second time in club history, would mean 2015/16 would go down as a major disappointment by Maccabi’s standards.Haifa, on the other hand, hasn’t won any title in five years after dominating the first decade of the 21st century, claiming seven championships between 2001 and 2011.The cup had eluded the Greens even during their heyday though, with Haifa last lifting the famous piece of silverware back in 1998. Haifa has reached four finals since, the last of which in 2012, but was forced to watch other teams celebrate time and again.Haifa ended the league campaign in fourth place, the fourth time in the past five years that it has finished in fourth or lower. However, it at least managed to secure its return to continental play after three seasons, booking its place in the Europa League in 2016/17 even should it lose on Tuesday.Levy began Monday’s pre-match press conference by apologizing to fans for Saturday’s embarrassing loss, and insisted it is possible for the team to bounce back after just three days, especially as there are expected to be at least five changes to the lineup that was humbled at Bloomfield Stadium.“We have no other choice but to rebound as this is a big moment for the club,” said Levy. “Despite the disappointment from the last match, the team has progressed over the past couple of months and played very well, including drawing with Maccabi Tel Aviv.”Haifa announced two weeks ago that is has picked up the option in Levy’s contract for next season, while also revealing that it has signed Norwegian Tor-Kristian Karlsen as the club’s Sports Director, a position which hadn’t existed at the club previously.There will also be some major changes at Maccabi Tel Aviv ahead of next season, with the club announcing on Saturday that CEO Martin Bain will be leaving at the end of June for a similar role at English Premier League club Sunderland.There will also be in all likelihood a change in the head coaching position, with the appointment of Peter Bosz as the new coach of Dutch giant Ajax expected as soon as Tuesday night.Bosz hasn’t lost a single match since replacing Slavisa Jokanovic as Maccabi coach at the beginning of January.That still wasn’t good enough to guide the team to the championship, but he will be hoping to at least end his reign with one title.“This is a new game, but on the other hand Saturday’s result was not usual,” said Bosz. “When you are a coach of Maccabi Tel Aviv you come here to win titles. We already lost the championship, so we now need to win the cup because that is what we have left.“Of course we are disappointed we didn’t win the championship which is normal. But we have to shift our focus and think about the cup final. If you are a coach of Maccabi you have to win. The pressure is there but not more than normal.”