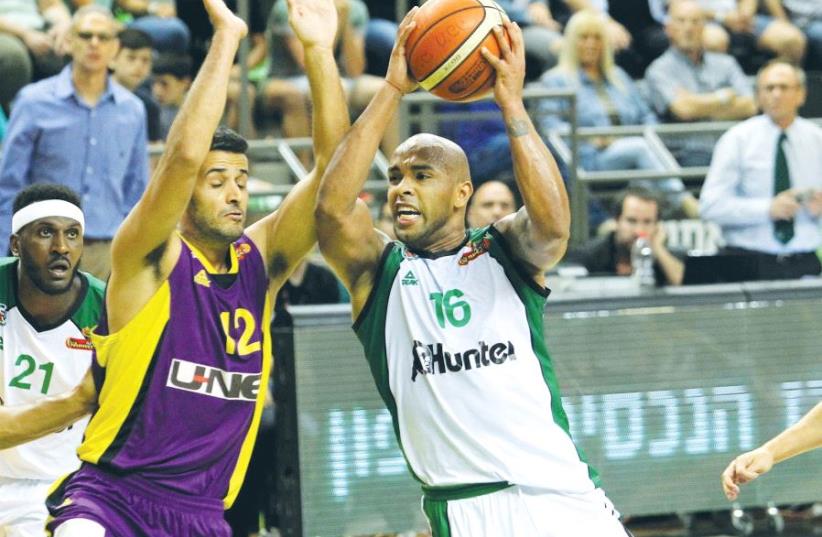 Maccabi Haifa forward Gregory Vargas (center) had 12 points and eight assists in last night’s 101-70 win over Hapoel Holon and Shlomi Harush (left) in Game 2 of their quarterfinal series
(photo credit: ERAN LUF)
Advertisement
Despite only qualifying for the playoffs on the final day of the regular season, Maccabi Haifa proved on Saturday night that it is more than capable of becoming the first No. 8 seed to knockout a top seed in BSL post-season history, thrashing Hapoel Holon 101-70 at Romema Arena to tie the series at 1-1.Haifa came tantilizingly close to winning Game 1 on the road, ultimately losing 104-99 in double overtime. But it wouldn’t be denied on Saturday, never trailing on the way to a comprehensive victory that means the series will return to Haifa.John DiBartolomeo was unstoppable for Haifa, scoring 28 points, including six three-pointers. Haifa had four other players in double figures and gave Holon no chance by hitting 15-of-32 three-point attempts.Tu Holloway netted 21 points for Holon, which hosts Game 3 on Wednesday.Game 4 will be played in Haifa next Saturday, with a fifth and decisive encounter to be held in Holon if necessary.Haifa made its intentions clear from the start, scoring the first eight points of the night and not allowing Holon on the board for nearly four minutes. After breaking their drought, the visitors went on an 8-0 run of their own and the score was tied before too long.Nevertheless, Holon never managed to take the lead, with Haifa scoring the final six points of the period to open a six-point advantage (19-13). A DiBartolomeo’s three-pointer midway through the second quarter extended Haifa’s gap to 12 points (32-20) and the Greens were in control at the break (46-33).After scoring 34 points in the series opener, Holloway was almost single-handedly keeping Holon within striking distance in Game 2, with the visitors closing to within six points (52-46) in the third frame.However, Holloway couldn’t do it all by himself and Holon was lost once Haifa managed to close him down.A 24-4 run by the hosts was capped by another DiBartolomeo triple, opening a 26-point margin (76-50) with eight minutes to play from which Holon was never going to come back.The playoffs continue on Sunday when Maccabi Tel Aviv takes a 1-0 lead to Game 2 at Bnei Herzliya, while Maccabi Rishon Lezion looks to level its series against Hapoel Eilat when it hosts the southerners.Arik Shivek’s tenure at Maccabi Tel Aviv got off to an impressive start in Game 1, with the yellow-and-blue claiming a comfortable 87-73 win.Shivek replaced Ainars Bagatskis to become the team’s fourth coach of the season.On Monday, Hapoel Jerusalem, which was the only team to lose at home in Game 1, looks to rebound from Scotty Hopson’s buzzer-beating three-pointer for Ironi Nahariya when it goes up North for Game 2.