Maccabi on verge of progress following 3-1 win in Romania, Jerusalem draws 1-1 in Latvia 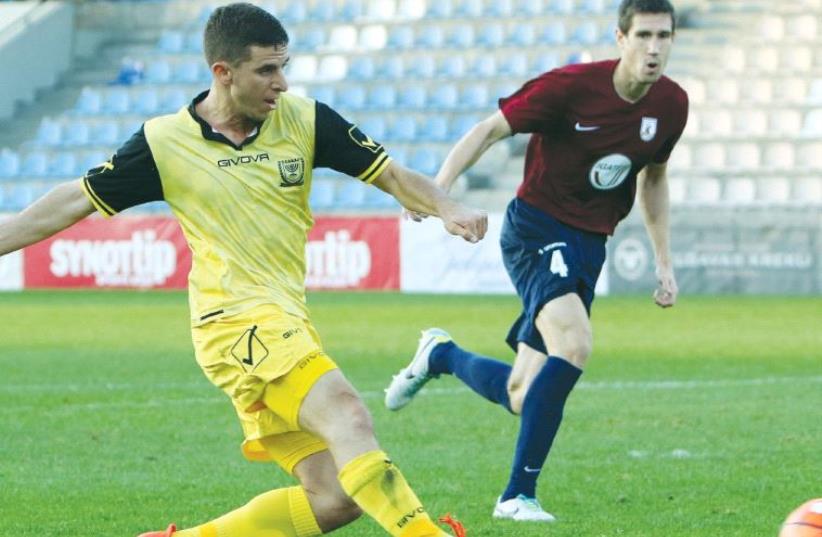 Beitar Jerusalem midfielder Idan Vered nets his team’s opener in last night’s 1-1 draw against Jelgava in Latvia in the first leg of the Europa League third qualifying round.
(photo credit: UDI ZITIAT)
Advertisement
Maccabi Tel Aviv all but secured its place in the Europa League playoffs with a 3-1 win over Pandurii Targu Jiu in Romania on Thursday, while Beitar Jerusalem will be confident of joining the yellow-and-blue after registering a 1-1 draw against Jelgava in Latvia.After reaching the Champions League group stage last season, Maccabi began its current continental campaign in the first qualifying round of the Europa League, a consequence of last term’s failure to claim a title.However, Thursday’s convincing win in the first leg of the third qualifying round on the road means it should have little trouble reaching the final qualifying round next week and close in on a place in the Europa League group stage.Maccabi took the lead in the 7th minute via a sensational solo effort by Tal Ben-Haim. The winger raced past one defender thanks to a delicate chip and found the back of the net with his second touch.Pandurii should have equalized six minutes later, but Maccabi goalkeeper Predrag Rajkovic denied Filip Mrzljak what looked to be a certain goal.The Romanians would level the score on 30 minutes. Ovidiu Herea netted the equalizer with a header after a team move down the right flank exposed Maccabi’s defense.Maccabi needed just two second-half minutes to regain its lead, with Haris Medunjanin’s free kick being headed in by Nosa Igiebor. Dor Micha made it 3-1 in the 77th minute and Tel Aviv should cruise to the playoffs in the second leg in Netanya next Thursday.In Latvia, it was clear Beitar was the better team from the first whistle and the visitors took a deserved lead in the 25th minute. Idan Vered slotted in from close range, but it was Omer Atzili’s assist which caught the eye. Atzili picked up the ball in the center of the field and moved into space in the right flank before threading a perfect ball through to Vered. Atzili has been in sensational form to start the season, almost single-handedly leading Beitar to what is arguably its most successful European campaign in club history.The striker, who celebrated his 23rd birthday on Wednesday, is in the midst of arbitration proceedings against Beitar, with a decision regarding the terms under which he will be allowed to leave the club expected over the next couple of weeks. He has been looking to leave since falling out with owner Eli Tabib towards the end of last season following bitter contract negotiations which ended in stalemate.Atzili is signed until the end of 2016/17, but Beitar is desperate to extend his deal and keep him at the club for as long as possible while also making sure he doesn’t leave for free at the end of the season.In the meantime, he has ensured Beitar has won two consecutive continental ties for the first time ever in what is its ninth appearance in European competition. Aztili scored the only goal in the 1-0 aggregate win over Sloboda Tuzla of Bosnia in the first qualifying round before netting all three of his team’s goals in the second round tie versus Omonia Nicosia, including two in the 3-2 defeat in Cyprus last week that secured Jerusalem’s progress on away goals.He was by far the best player on the pitch against Jelgava as well, but Beitar’s wastefulness in front of goal means it still has work to do next week.After Claudemir and Itay Shechter squandered two golden opportunities in two minutes with only the goalkeeper to beat, the hosts would equalize through Vitalijs Smirnovs. Beitar gave away a free kick and Smirnovs netted from close range following a melee in the box. Beitar couldn’t find a winner, but will still be expecting to secure its progress at Teddy Stadium.