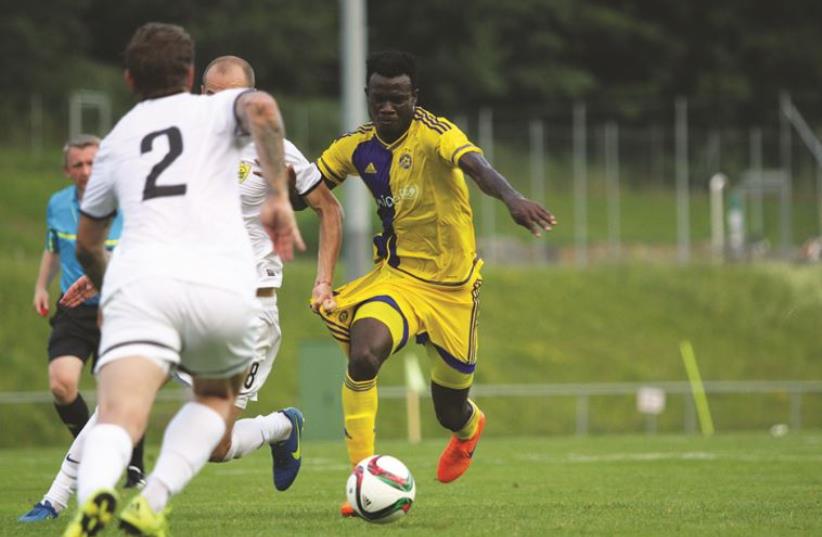 Nosa Igiebor
(photo credit: MACCABI TEL AVIV WEBSITE)
Advertisement
Maccabi Tel Aviv’s European campaign is in danger of ending in shock fashion next week after the three-time defending Israeli champion suffered a humbling 2-1 defeat at Malta’s Hibernians on Tuesday.The yellow-and-blue left itself with plenty of work to do in the second leg of the Champions l eague second qualifying round at Bloomfield s tadium next Tuesday, after conceding two soft goals in the second half, canceling out Nosa Igiebor’s opener.Maccabi looked to be in complete control after the n igerian gave it a 1-0 lead in the 22nd minute. However, Jorginho’s equalizer in the 74th minute and Jackson Lima’s winner five minutes from time seriously complicated Tel Aviv’s situation in a round it was expected to come through with ease.The disappointment of the past two seasons in the Champions League qualifiers, when Maccabi was knocked out in the third qualifying round, is still fresh in the minds of many of the team’s players.However, being knocked out by Hibernians would be an embarrassment which will forever stain their careers, with the Maltese champion winning its first match in European competition since 2002 on Tuesday.Maccabi remains a favorite to overcome Hibernians at home next week, especially having scored an away goal. However, even should it do so, the yellow-and-blue’s dreams of reaching the group stage for the second time in club history and the first since the 2004/05 season will be dashed soon after should it not register a massive improvement on its level of play from Tuesday.Maccabi may already face the likes of Celtic, FC Basel or Apoel Nicosia in the third qualifying round, with even tougher opponents possibly awaiting in the final playoff round.Maccabi will hope to at least have star midfielder Ean Zahavi back at full fitness for the second leg against Hibernians, with new Serbian coach Slavisa Jokanovic already under pressure after his first match at the helm.Jokanovic will also be crossing his fingers that he will have new players at his disposal by next week, with Maccabi so far only signing one new player, bringing back defender Tal Ben-Haim after 11 years in Europe. Jokanovic hasn’t hidden his displeasure with the club’s lack of activity on the transfer market and sports director Jordi Cruyff seems intent on adding to the squad after allowing midfielder Maharan Radi to leave for Hapoel Beersheba over the weekend.Maccabi should have had the lead after just five minutes on Tuesday, but Gili Vermouth fired straight at Jurgen Borg with only the goalkeeper to beat.However, Maccabi didn’t need to wait long to net the opener, with Igiebor finishing off a nice team move.Dor Micha crossed the ball from the right and Eden Ben-Basat found Igiebor with his header, leaving the Nigerian with the simple task of slotting in from close range.Ben-Basat should have got his name on the score sheet four minutes later, but his shot was cleared off the line by a m altese defender, with the goalkeeper already beaten.Maccabi seemed content on strolling through the second half, but it would ultimately pay the price for its laid-back approach. Tel Aviv’s defense fell asleep in the 74th minute, allowing Jorginho to sneak into the box and head Jackson Lima’s cross into the net at the far post.Matters went from bad to worse for Maccabi in the 85th minute. Andrew Cohen’s free kick was headed in by Jorginho, who made the most of the yellow-and-blue’s poor marking and sent it to a shock loss.