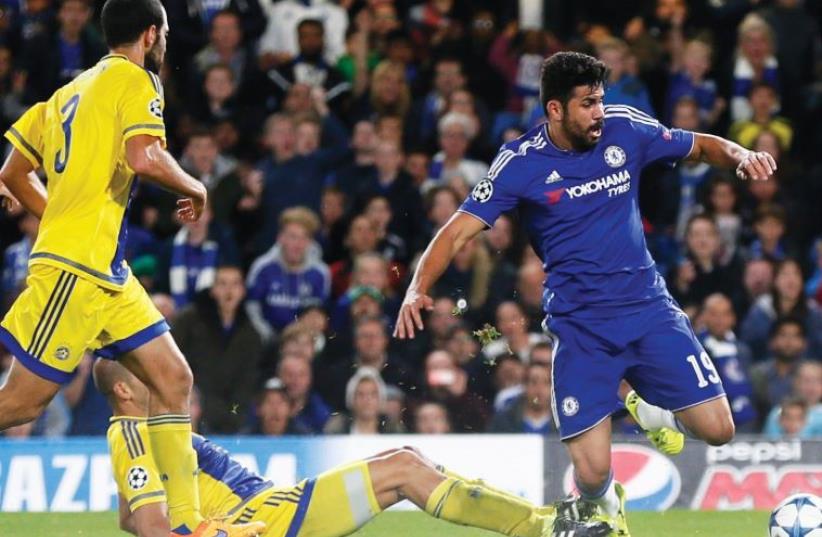 Chelsea beats Maccabi Tel Aviv 4-0 in Champions League Group G encounter, September 16, 2015
(photo credit: REUTERS)
Advertisement
Despite Maccabi Tel Aviv’s unpleasant welcome to the Champions League group stage, coach Slavisa Jokanovic remains optimistic that his team still has plenty to offer against Europe’s best.The three-time defending Israeli champion was outplayed by Chelsea in every aspect at Stamford Bridge in London on Wednesday night, dropping to a resounding 4-0 defeat to the English champion.Chelsea entered the contest on the back of its worst start to the Premier League in almost 30 years, and coach Jose Mourinho also rested several of his stars. However, it still bossed Maccabi around from start to finish, emphasizing the huge gulf in quality between Israel’s top club and the cream of Europe.Maccabi, which was making its first group stage appearance in 11 years with the last Israeli side to do so being Hapoel Tel Aviv five years ago, is nevertheless hoping that Wednesday’s drubbing will prove to be an invaluable experience ahead of the remainder of the campaign.Tel Aviv hosts Dynamo Kiev at Haifa Stadium in its next match on Tuesday, September 29 in what many at the club believe is Maccabi’s best chance to win a game in Group G.Kiev drew 2-2 with Porto in Ukraine on Wednesday.“We arrived here to learn,” Jokanovic said after the loss to Chelsea.“We played against a very strong team and it was a tough game for us.I expect that in the next game we can offer more and be more competitive.”Jokanovic had no complaints.“This is a new and important competition and it is tough for us to compete after 11 years away from the Champions League,” said the 47-yearold Serb.“We must be stronger to be more competitive. We did what we could do. We tried to be organized, but they are a good team and move very fast and they dominated and scored the goals and deserved the three points.This is the highest level, but we are also a Champions League team and in front of us are five games and we will do everything to improve. We can improve on many levels.”Sports director Jordi Cruyff called for perspective.“We have not faced this kind of opponent in many years,” said Cruyff.“This was a welcome to this level of competition and I hope we can learn from it. We shouldn’t tell ourselves it is a disaster. Maybe in a realistic way it would be much easier to compete in the Europa League. But the fact is that we wanted to test ourselves at the highest level which will mean we will also play better opponents.”Maccabi star Eran Zahavi was confident the team will bounce back.“We are better than this and we will learn from it,” he said. “We received a slap in the face, but we will handle it.”