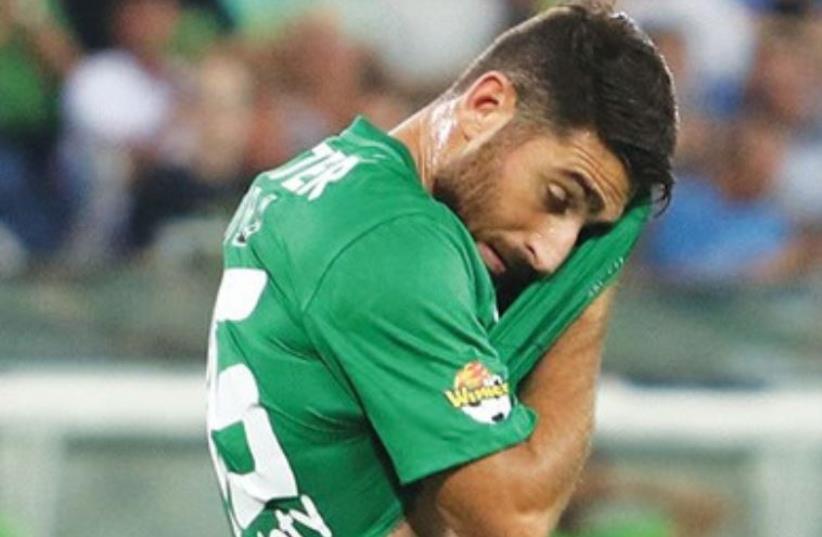 Maccabi Haifa striker Eliran Atar
(photo credit: ERAN LUF)
Advertisement
After opening its Premier League campaign with a shock home defeat to Bnei Yehuda, Maccabi Haifa looks to kick-start its season when it visits Hapoel Kfar Saba on Saturday.The 3-0 loss at Sammy Ofer Stadium last weekend not only sent Haifa to the bottom of the standings after a single match, but also sparked a crisis between coach Roni Levy and striker Eliran Atar.Atar was substituted at halftime before exchanging words with Levy and was rumored to be on his way out of the club.The league’s top scorer in 2012/13 who joined Haifa in January from French club Stade de Reims, wasn’t allowed to train with the team on Sunday and Monday before Haifa announced that he will face disciplinary action, but will remain at the club.Atar returned to training on Tuesday but is set to be left out of the squad on Saturday.Haifa announced the signing of Polish midfielder Ludovic Obraniak on Thursday and is hoping to still add a foreign striker by the end of August.The club is also refusing to release left-back Taleb Tawatha, who is desperate to join Serie A club Fiorentina, which has offered Haifa 1.5 million euros for his services.A slightly bigger offer from Fiorentina will likely convince the Greens to sell.After a seven-year hiatus from the top flight, Kfar Saba was on the verge of opening the season with a win, only to concede two late goals to draw 2-2 at Hapoel Ra’anana last Saturday.Reef Messika scored twice (19, 58) to put Kfar Saba in the driving seat. However, Mamadou Thiam netted from the penalty spot in the 90th minute and Adi Nimni equalized in the fourth minute of stoppage time.Also Saturday, Hapoel Tel Aviv hosts Ironi Kiryat Shmona, Maccabi Petah Tikva visits Hapoel Haifa and Bnei Sakhnin welcomes Hapoel Ra’anana.On Sunday, the two title favorites meet at Teddy Stadium in Jerusalem when Hapoel Beersheba hosts Maccabi Tel Aviv. Beersheba is hosting the match in Jerusalem as its new Turner Stadium is still not ready.Also Sunday, Beitar Jerusalem visits Maccabi Netanya, with Bnei Yehuda welcoming Hapoel Acre on Monday.