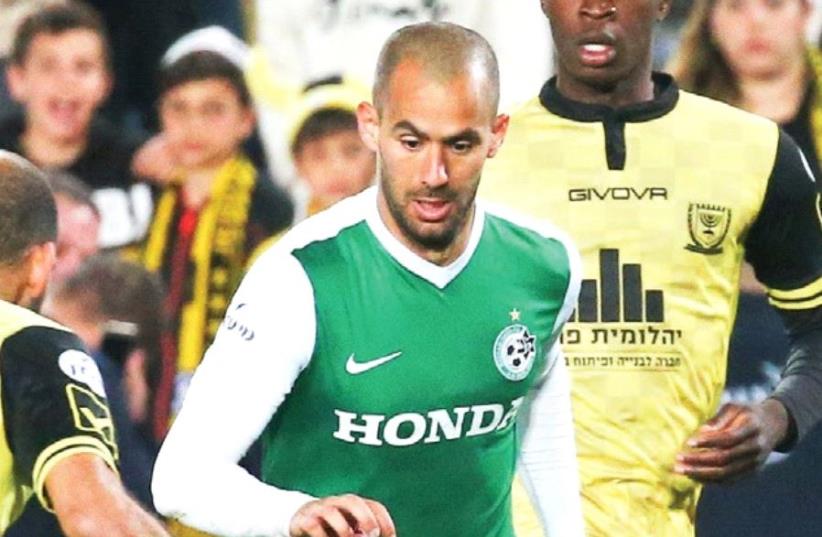 Maccabi Haifa midfielder Gili Vermouth scored the winner in last night’s 1-0 road victory over Beitar Jerusalem at Teddy Stadium in the capital
(photo credit: DANNY MARON)
Advertisement
Maccabi Haifa kept its Premier League championship playoff hopes alive with a hard-fought 1-0 win over Beitar Jerusalem at Teddy Stadium on Monday night.Beitar dominated the possession and reached several scoring opportunities before Gili Vermouth netted the only of the match in the 36th minute with a super strike from the edge of the box.Haifa moved tied on points and goal difference with Ironi Kiryat Shmona in sixth place, with the latter having the edge having scored more goals. Bnei Sakhnin is three points further in front, and together with Haifa and Kiryat Shmona enters the final weekend of the regular season still battling for a place in the top-six championship playoffs.Haifa hosts Hapoel Ra’anana, Kiryat Shmona faces Hapoel Kfar Saba and Bnei Sakhnin welcomes Hapoel Tel Aviv, with every goal being possibly decisive.Haifa bounced back from last week’s 1-0 loss to Ashdod SC, soaking up Beitar’s pressure for much of the night and riding its luck towards the end.“I knew we are entering this game in a problematic situation after we were awful against Ashdod,” said Haifa coach Guy Luzon. “This is just the first step because if we don’t build on this against Ra’anana than this win means nothing.”Qualification for the championship playoffs will not only keep alive Haifa’s hopes of reaching European competition next season, but will also guarantee the club big pay days with additional home matches against Hapoel Beersheba, Maccabi Tel Aviv and Beitar Jerusalem.Beitar suffered its first league defeat under coach Sharon Mimer after three straight wins, remaining in fourth place, eight points back of Maccabi Petah Tikva and two in front of Sakhnin.“This loss is a big blow to our hopes of moving up to third place, but we still have 11 more matches to play to try and catch them,” said Mimer, who takes his team to Turner Stadium to face Hapoel Beersheba next week.