Yellow-and-blue cuts gap back to two points ahead of leader’s visit to Kfar Saba tonight. 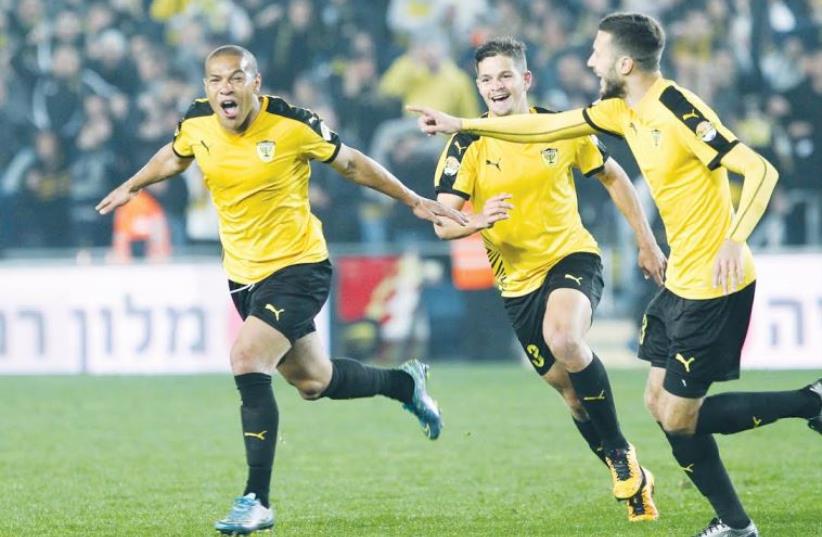 f Beitar Jerusalem’s Claudemir (right)
(photo credit: DANNY MARON)
Advertisement
Maccabi Tel Aviv kept the pressure on Hapoel Beersheba with a 1-0 win over Bnei Yehuda at Bloomfield Stadium on Saturday night, closing within two points of the summit for at least 24 hours.Beersheba, which has won 17 of its past 19 games, including a club record seven straight, visits Hapoel Kfar Saba on Sunday.An Eli Dasa goal from 20 meters out in the 29th minute was all that ultimately separated Maccabi and Bnei Yehuda, though the former dominated proceedings.“Apart from the first 10 minutes and the last 10 minutes I thought we played a good game,” said Maccabi coach Peter Bosz. “In the end it was a bit nervous because we only scored one goal. We had so many chances to score the second one, but when you don’t pull the trigger it will be tight at the end.”The field for the championship playoffs was all but set on Saturday, with Hapoel Ra’anana officially becoming the fourth team to secure its qualification, while Maccabi Haifa and Bnei Sakhnin also ensured they will finish among the top six barring an extremely unlikely combination of results.Ra’anana celebrated despite conceding an 88th-minute equalizer to draw 1-1 with Hapoel Haifa. Evans Kangwa gave Ra’anana the lead in the 50th minute with his 10th league goal of the season, his fourth over the past six games, only for Zarko Korac to secure Haifa a share of the spoils with two minutes to play. Nevertheless, Ra’anana officially wrapped up its place in the top six, qualifying for the championship playoffs for the first time in club history.“For us this is like winning the championship,” said Ra’anana coach Haim Silvas.The draw took Haifa out of the relegation zone on goal difference at the expense of Hapoel Acre, which visits Hapoel Tel Aviv on Monday.Maccabi Haifa and Sakhnin also effectively booked their place in the championship playoffs after both claimed convincing victories on Saturday.Haifa beat rock-bottom Maccabi Netanya 3-0 on the road courtesy of goals from Dekel Keinan (6), Eliran Atar (51) and Glynor Plet (57).Sakhnin defeated Ironi Kiryat Shmona 3-0 thanks to strikes from Firas Mugrabi (29), Shlomi Azulay (56) and Weeam Amasha (90). Sakhnin won for the fifth time in its past six games, taking its overall goal difference over that stretch to 10-0.Hapoel Kfar Saba is the only other team that can still mathematically finish in the top six, but it needs to win its final two regular season games by astronomical margins, including against Beersheba on Sunday.Beitar Jerusalem maintained its stranglehold on third place, moving 12 points clear of fourth with a 2-0 win over Maccabi Petah Tikva on Saturday. Goals from Claudemir (29) and Nikita Rukavytsya (50) made it four straight wins for Beitar, tying its longest winning streak this season.Petah Tikva’s Hagay Goldenberg was sent off in stoppage time.“This is a great birthday present,” said Beitar coach Slobodan Drapic, who will celebrate his 51st birthday on Sunday. “All the players care about is continuing to improve and I’m really enjoying working with them.”