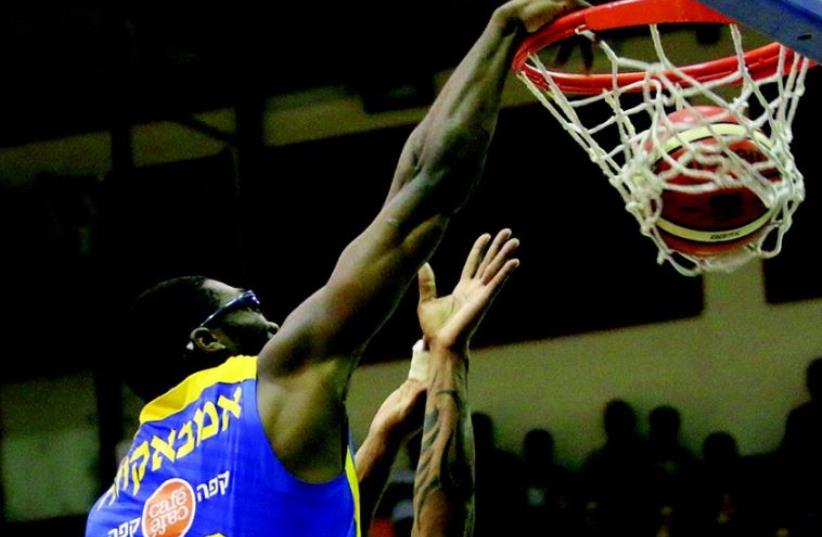 Maccabi Tel Aviv’s Trevor Mbakwe
(photo credit: ADI AVISHAI)
Advertisement
Maccabi Tel Aviv had to work harder than expected to move to 2-0 in the BSL on Sunday, beating Bnei Herzliya 85-70 on the road.Maccabi was playing without Brian Randle, Taylor Rochestie and Vítor Faverani and Herzliya closed within four points midway through the final quarter.However, the yellow-and-blue did enough to clinch the win and boost its confidence following the 31-point drubbing it suffered at the hands of CSKA Moscow in its Euroleague opener on Thursday.Maccabi hosts reigning champion Hapoel Jerusalem at Yad Eliyahu Arena next Sunday.Jordan Farmar had 19 points and six steals for Maccabi, with Trevor Mbakwe adding 18 points and 16 rebounds. Drew Crawford scored 19 points for Herzliya, which dropped to 0-2.Tel Aviv led from start to finish, but struggled to put the game to bed. The yellow-andblue was in front by 18 points midway through the second quarter, but was ahead only by eight (41-33) at the break.Maccabi established a 15-point margin in the third frame, but once more allowed the hosts back into the game before finally clinching the victory in the closing stages.Maccabi Rishon Lezion joined Maccabi Tel Aviv and Hapoel Jerusalem at 2-0 thanks to a 76-69 victory at Hapoel Tel Aviv. The game was decided by a 13-0 Rishon run in the final five minutes.Darryl Monroe impressed once more with 27 points and 11 boards for Rishon, with Chris Wright adding 15 points and seven rebounds. Chris Evans scored 21 points for Hapoel, which fell to 1-1.“We showed a lot of character by coming back and ending the game with a 13-0 run,” said Rishon coach Sharon Drucker.“There is still a long way to go in the season, but this team has many qualities which I like.”Rishon got off to the better start, opening an early ninepoint gap (14-5). However, the visitors held just a threepoint margin (22-19) entering the second frame and Hapoel would score the first five points of the quarter to take a lead it would maintain until the fourth period.The hosts had a four-point advantage (38-34) at the break and led by as many as nine points (51-42) midway through the third frame. But Hapoel couldn’t break Rishon’s resistance, although it was still ahead by five points (58-53) entering the final 10 minutes. A Talor Battle three-pointer with 5:34 minutes remaining kept Tel Aviv in the driving seat, opening a six-point margin (69-63), but the resilient Rishon never lost hope.Rishon star Shawn Dawson finally netted his first field goal of the night with 3:20 minutes to play (69-67), and despite picking up his fifth foul in his team’s next possession, his team found a way to eke out a win.Hapoel couldn’t buy a basket and Rishon’s 13-0 run to end the game, including eight points by Monroe, would secure a tough road victory.“I’ve got to give credit to my team, they kept going to me and everybody else helped us get the win,” said Monroe.“You’ve just got to fight hard and keep playing. We can lose every game and we can win every game. We can’t take anyone lightly and we have got to take one game at a time.”