After an impressive preseason, the rebuilt Maccabi took some time to find its rhythm on Saturday, but a 15-0 run in the third quarter was enough to secure the win. 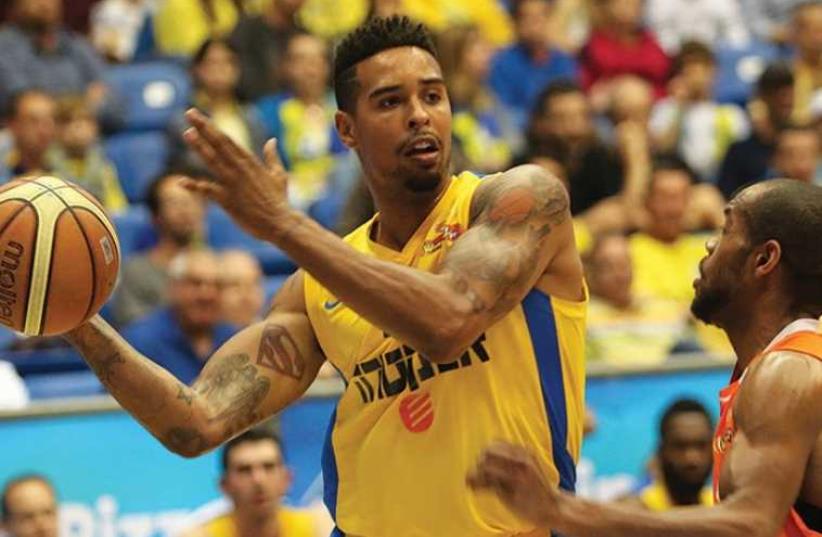 Maccabi Tel Aviv forward Sylven Landesberg had 13 points in his team’s 86-74 win over Ironi Ness Ziona at Yad Eliyahu Arena, May 6, 2015.
(photo credit: ADI AVISHAI)
Advertisement
Maccabi Tel Aviv opened its BSL campaign with what it hopes will be the first of many straight-forward league wins, thrashing newly- promoted Maccabi Kiryat Gat 89-65 at Yad Eliyahu Arena.After an impressive preseason, the rebuilt Maccabi took some time to find its rhythm on Saturday, but a 15-0 run in the third quarter was enough to secure the win, opening a 21-point gap (61-40).Taylor Rochestie had 14 points for Maccabi, which visits CSKA Moscow in its Euroleague opener on Thursday. Brian Randle added 13 points, with Paul Delaney leading Kiryat Gat with 17 points.“It is important to start the season on the right foot and continue working on our weaknesses,” said Maccabi coach Guy Goodes. “We will not have any room for error against CSKA and we will have to improve on this performance.”On Sunday, reigning champion Hapoel Jerusalem opens its title defense when it hosts Maccabi Ashdod.Jerusalem has maintained the core of last season’s triumphant roster, while signing Josh Duncan, Yancy Gates, E.J. Rowland and D’or Fischer. However, it has struggled for much of the preseason, winning just one game while losing five times.“We are excited ahead of the start of the season,” said Jerusalem coach Danny Franco. “We are back at our home arena and we are looking forward to a season which presents us with many challenges. We want to fight with everything that we have in order to achieve our targets.”Veteran coach Tzvika Sherf is back for another season at Ashdod, which advanced to the second round of the State Cup last week, beating Kiryat Ata 75-67. Ashdod is expected to be led by Americans Isaiah Swann, Diante Garrett and Charles Thomas.“I’m very excited to be starting a new season, especially against the reigning champion, which we really respect,” said Sherf.On Monday, Hapoel Holon hosts Bnei Herzliya, Hapoel Tel Aviv visits Ironi Ness Ziona and Maccabi Rishon Lezion welcomes Eilat.Maccabi Haifa hosts Ironi Nahariya on Friday after the Greens return from their NBA tour. Haifa gave the Memphis Grizzles a run for their money on Thursday night before suffering a 97-84 defeat. Haifa trailed by just three points (85-82) with less than three minutes remaining.Dijon Thompson led Haifa with 17 points, followed by Rene Rougeau’s 15 points, seven rebounds and seven steals. Haifa will complete its tour when it plays the Los Angeles Lakers on Sunday.