Maccabi’s roster is undergoing a complete overhaul after failing to reach the BSL final for the first time since 1993. 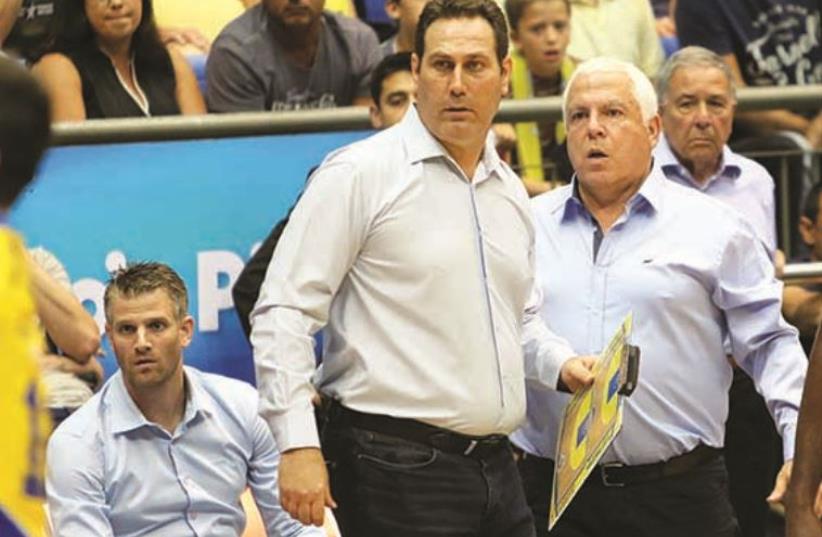 Despite having a guaranteed contract for next season, Guy Goodes (center) may have coached his final game for Maccabi Tel Aviv
(photo credit: ADI AVISHAI)
Advertisement
Maccabi Tel Aviv should have little trouble cruising to the Euroleague Top 16 once more, while Hapoel Jerusalem faces a trickier prospect in the Eurocup regular season as it looks to make amends for last season’s humbling exit.Maccabi’s roster is undergoing a complete overhaul after failing to reach the BSL final for the first time since 1993. However, even when taking into account the time its new players will take to gel, the yellowand- blue should not struggle to finish among the top four in Group D following Thursday’s draw.CSKA Moscow, which thrashed Maccabi both home and away in the regular season last term, is the favorite to win the group, but Tel Aviv will be confident of finishing ahead of Unicaja Malaga of Spain, German champion Brose Baskets Bamberg, Darussafaka Istanbul of Turkey and Italian champion Dinamo Sassari.“This is an interesting group and clearly no game will be easy,” said Maccabi coach Guy Goodes, who will remain at the helm for another season despite the team’s failure in the Israeli league.Only four players from last season are sure to be back for 2015/16, with Yogev Ohayon, Devin Smith, Sylven Landesberg and Guy Pnini all under contract.The yellow-and-blue has already made four new signings, including former NBA guard Jordan Farmar, who spent a twomonth stint in Tel Aviv during the NBA lockout in 2011.Last season’s Euroleague top scorer Taylor Rochestie, Trevor Mbakwe and Dagan Yivzori have also all joined. However, Gal Mekel will not be rejoining the team, with Maccabi announcing on Thursday that it has broken off negotiations with the Israeli guard due to their different timetables.“We are basically starting from scratch,” said Goodes, who revealed that Maccabi is still considering bringing back Brian Randle despite allowing him to test free agency.“After the season we experienced there were some players we had to part ways with, while on the other hand we held on to a small core. We will have to get everyone to play as part of a team, because names don’t win games.”Despite winning its first domestic title, Jerusalem was forced to settle for a place in the Eurocup yet again, with the Euroleague rejecting its request to receive a wild-card.Jerusalem registered an embarrassing 2-8 record in the Eurocup regular season in 2014/15 and will have its work cut out for it this season as well. Hapoel plays Galatasaray Istanbul of Turkey, Nizhny Novgorod of Russia, Krasny Oktyabr Volgograd of Russia, AEK Athens of Greece and Lithuania’s Neptunas Klaipeda.After 10 regular season games, the top four teams from each group will enter the Last 32 phase. The Last 32 features eight groups of four teams, with the best two teams from each group advancing to a two-game, head-to-head, home-and-away aggregate series. The quarters, semis and finals will also employ the same format.“We will track our opponents, but first and foremost we need to design our team for next season,” said Hapoel coach Danny Franco, who has made one significant signing so far this summer, bringing back Josh Duncan. “Our goal is always to progress to the next round.”