Israeli soccer season curtain-raiser is back after 26 years with last term’s treble winner to play runner-up. 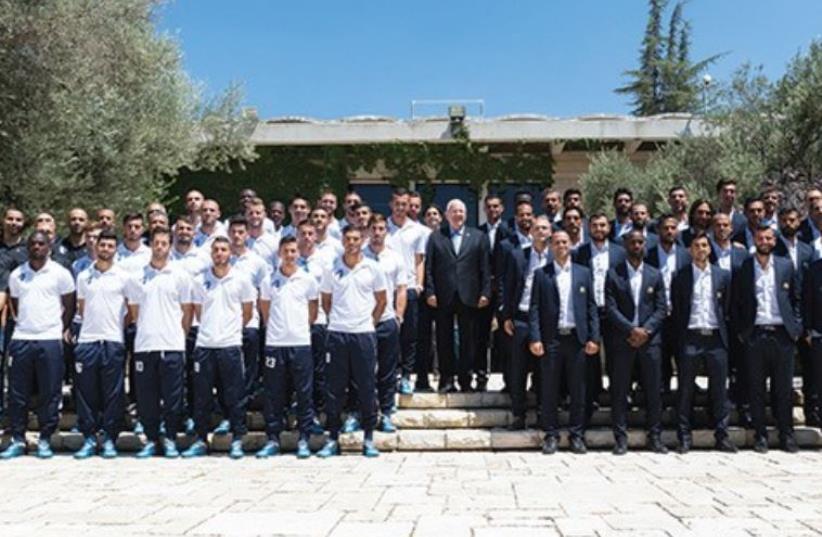 Last season’s treble winner Maccabi Tel Aviv (right) and league runner-up Ironi Kiryat Shmona (left) met President Reuven Rivlin
(photo credit: ERAN LUF)
Advertisement
The Israeli Super Cup is back after 26 years, and after becoming the first team to win the domestic treble last season, Maccabi Tel Aviv is keen to get 2015/16 off to a triumphant start when it faces Ironi Kiryat Shmona in Netanya on Saturday.The curtain raiser to the domestic campaign between the reigning champion and State Cup holder, or between the champion and runner-up if the same team won both titles like Maccabi last season, was first held in 1956 and became a staple in local soccer’s calendar after taking place regularly between 1974 and 1989.However, the showdown has not been played since Bnei Yehuda beat Hapoel Kfar Saba 1-0 in 1989, with plans to renew the tradition being postponed on a couple of occasions before an agreement was finally reached to bring the Super Cup back ahead of the start of the 2015/16 campaign.With the first leg of its Champions League playoff against FC Basel to take place next Wednesday, the timing of the match is hardly ideal for Maccabi.Nevertheless, coach Slavisa Jokanovic insisted on Thursday that he will not focus on the tie against Basel until after the Super Cup.“We have a chance to win a title and this is the match we are preparing for,” said Jokanovic.“We will give 100 percent on Saturday and only after that match we will think of Basel and the Champions League. We need to be focused and respect the Super Cup.”Jokanovic said he remains unsure regarding his starting lineup on Saturday, with new signings Eli Dasa and Shlomi Azulay both set to be handed their debuts.“We have long been thinking of signing both of these players and they will be important for us,” said Jokanovic. “They have a bright future and they will probably get their first chance on Saturday. They are at the right age and we are sure they can be an important part of the club going forward.”Kiryat Shmona was knocked out last week in the third qualifying round of the Europa League by Slovan Liberec of the Czech Republic and is looking to register a confidence-boosting win ahead of the start of the new Premier League season next weekend.“Maccabi is a strong team, but we will be ready and want to win this title,” said coach Salah Hasarma.Earlier Thursday, Maccabi Tel Aviv was awarded the first “Shield of Honor,” presented by Israel President Reuven Rivlin after the team excelled in the fight against racism and violence. Tel Aviv was followed by Maccabi Haifa and Maccabi Netanya.“We understand that soccer is a lot more than just a game,” said Rivlin. “We are talking about soccer, but actually this is the face of Israeli society. Soccer is the biggest youth movement in Israel.Tens of thousands of children and teenagers play the game.Soccer is an educational tool and brings together all the parts of Israeli society.“On the pitch everyone is equal.”Maccabi sporting director Jordi Cruyff spoke of the importance of the award to the yellow-and-blue.“Sometimes a trophy like this is more important than the ones won on the field as this is for social issues,” said Cruyff. “I do think we should be proud of this trophy because we showed determination. This is not a final step but we should take this as an encouragement to try and keep improving and continue to eradicate all kinds of violent behavior because this is not what Maccabi stands for.”