Yellow-and-blue to play in Eurocup after winning in Istanbul, but not by the required margin. 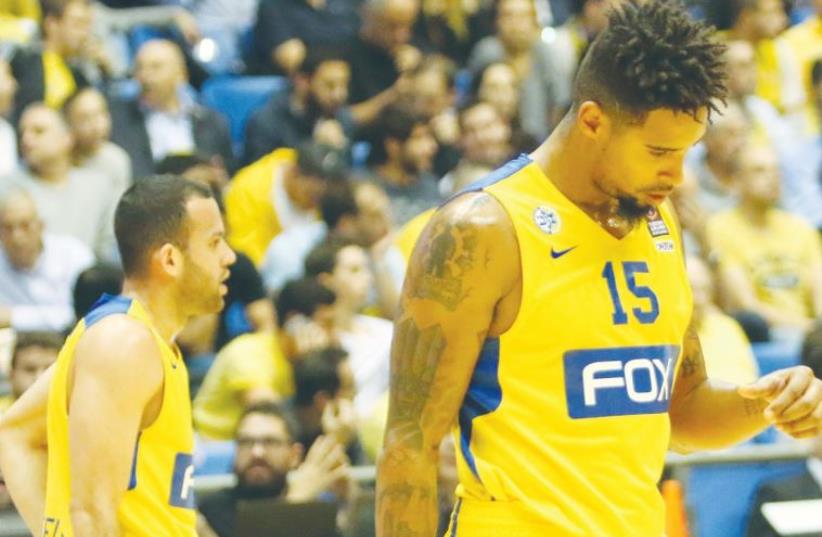 Maccabi tel aviv Forward Sylven Landesberg (right)
(photo credit: ADI AVISHAI)
Advertisement
For the first time in 22 years, Maccabi Tel Aviv will not be among the last 16 in European basketball’s premier club competition, being knocked out in the Euroleague regular season on Thursday night despite beating Darussafaka 70-66 in Turkey.Since dropping the Israeli league title in 1992/93 and failing to qualify for the competition, Maccabi has always reached at least the round of 16.The Euroleague’s format changed several times since, but the yellow-and-blue’s place with the continent’s best always seemed all but guaranteed, with Maccabi reaching nine Final Fours and claiming four titles over that period.However, that streak came to an end on Thursday, with Maccabi ultimately paying the price for its dismal start to the campaign.Tel Aviv won just one of its first seven games, although it entered Thursday with a chance of progressing after beating Dinamo Banco di Sardegna Sassari of Italy and Brose Baskets Bamberg of Germany in its last two games.Maccabi needed to beat Darussafaka by at least 11 points in Istanbul in order to leapfrog the Turks and finish in fourth place in Group D.However, despite erasing a 10-point deficit in the fourth quarter, Maccabi ultimately ran out of time, winning the game by four points after embarrassingly trying to force overtime by intentionally missing shots in the final minute.After scoring 16 three-pointers in each of its past two games, Maccabi netted only seven triples from 24 attempts (29 percent) on Thursday.Sylven Landesberg led Maccabi with 14 points with Jordan Farmar adding 13 points.Furkan Aldemir scored 12 points for Darussafaka, which advanced to the Top 16 for the first time in club history.The hosts opened an early six-point lead (15-9) on Thursday, but Maccabi finally hit its first three of the night with 2:08 remaining in the quarter, with Landesberg’s basket from distance being followed by another from Guy Pnini to tie the score at 19-19.Darussafaka scored the final four points of the frame and the hosts remained in front for much of the second period, with Farmar coming off the bench and keeping Maccabi within striking distance (35-32) with nine points in five minutes. After finding its range from beyond the arc, Tel Aviv crucially improved its defensive play in the second quarter, holding the Turks scoreless in the final five minutes of the second half.The yellow-and-blue ended the period with an 8-0 run to open a three-point edge (38-35) entering the second half and Devin Smith’s basket took the gap to six points (44-38).However, Maccabi would go almost six minutes until it scored its next field goal and was ahead by only a single point (50- 49) ahead of the final 10 minutes after missing all six of its attempts from three in the quarter.It took Darussafaka just four minutes in the fourth quarter to decide the game.Maccabi continued to miss from beyond the arc and Milko Bjelica’s dunk capped a 13-2 run, which gave the hosts a double- digit lead (62-52). Maccabi replied with a 13-1 surge (65-63), but with only 1:45 minutes remaining, the yellow-andblue turned it focus to trying to force overtime so it would have five more minutes to try and reach the required margin.A surreal final minute would follow, with Maccabi missing four free-throws intentionally. However, those efforts would be to no avail, with the hosts ultimately allowing Tel Aviv to win the game, but just by four points, meaning it was Darussafaka which celebrated at the final buzzer.