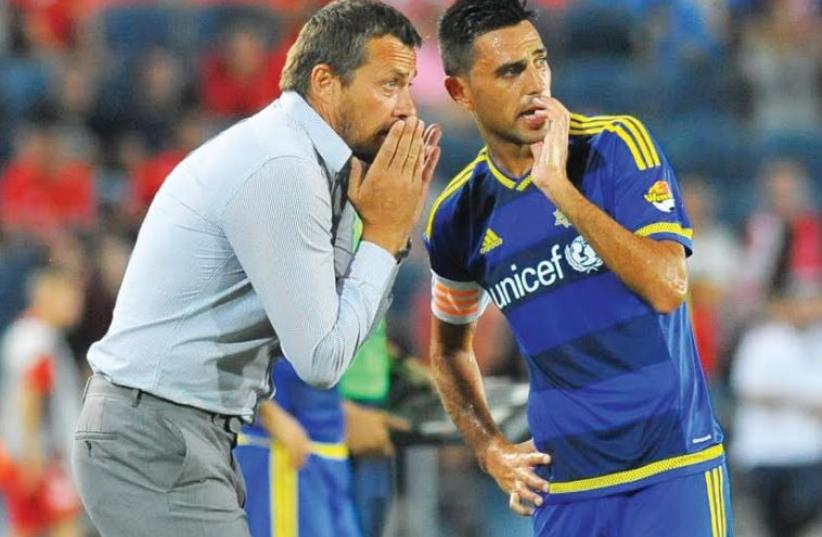 Maccabi Tel Aviv coach Slavisa Jokanovic (left) and star midfielder Eran Zahavi (right)
(photo credit: ASAF KLIGER)
Advertisement
Despite Chelsea’s desperately poor start to the English Premier League season, Maccabi Tel Aviv is not forgetting for one moment how firm an underdog it will be on Wednesday night at Stamford Bridge in London.After its remarkable run through the qualifying rounds, Maccabi could have hardly asked for a bigger spotlight for its first match back in the group stage of the Champions League since the 2004/05 season.The yellow-and-blue will deploy a similar game-plan to the one it used against FC Basel in the playoffs, allowing its opponent to control the possession while hoping to make the most of its few chances when breaking forward.Maccabi registered three attempts on target over the two matches against the Swiss champion and scored three goals, all of them by the prolific Eran Zahavi.Maccabi will be meeting an out-ofsorts Chelsea which will be treating Wednesday’s showdown as a golden opportunity to restore battered self-confidence.The Premier League champion slumped to its fourth defeat in six games when it lost 3-1 at Everton on Saturday. Nevertheless, manager Jose Mourinho said on Tuesday that he was under no pressure and that he had nothing to prove to anybody, despite the disappointing start to the season.“If Maccabi is good enough to beat Basel, than Maccabi is good enough to beat Chelsea,” said Mourinho. “We need to understand that they can beat us, but at the same time we also know we are a better team.”On Saturday, Mourinho admitted the poor run of results were the worst of his career but added he was the man to lead Chelsea out of their hole.“Well can you ask me why some managers can’t be in difficult situations five, six, seven, 10 years? And I am the current champion of England.Why should I be in trouble? Why? I think that’s a good question and you don’t know how to answer it,” said Mourinho to a reporter.“I’m fine, I promise you I’m fine. I’m not happy. I’m not used to lose so many times. But I’m adapting. I’m not adapting to losing but I’m adapting to the situation, the challenge to have to improve and I’m OK.”The Portuguese has also fallen out with club doctor Eva Carneiro and had another public spat with old adversary Arsene Wenger after losing to his Arsenal side in the Community Shield season curtain-raiser at Wembley.Mourinho knows the win is crucial in Chelsea’s Champions League campaign as after Maccabi it faces two tough away matches.“If we can win tomorrow we’ll put ourselves in a better position,” he said. After this game we go to Porto, we go to Kiev, two difficult matches away so it would be important for us to win tomorrow, that’s what we’re going to try.”Maccabi coach Slavisa Jokanovic and defender Tal Ben-Haim will both be making a return to Stamford Bridge after playing for the club in the past.Jokanovic had a two-year playing spell at Chelsea (2000-2002), making 53 appearances, while Ben-Haim also had a stint at the Bridge, featuring 23 times for the Blues (2007-2008).“This is an opportunity for me, for my team and for Israeli soccer,” said Jokanovic, with the last Israeli team to qualify for the group stage being Hapoel Tel Aviv in 2010/11. “I’m surprised Chelsea only has four points after five matches, but Chelsea is an excellent team.Mourinho is one of the best managers in the world and I will try to challenge him during the match. Chelsea will be more focused and motivated because of their situation and they will try to end their crisis against us.”