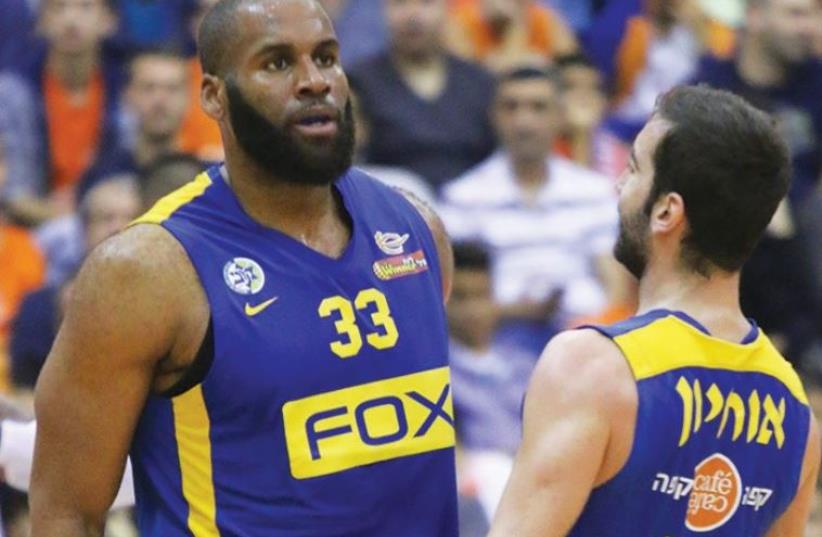 Maccabi Tel Aviv forward Arinze Onuaku (left) and guard Yogev Ohayon
(photo credit: ADI AVISHAI)
Advertisement
Maccabi Tel Aviv claimed a sweet 90-77 win over Hapoel Tel Aviv in the first derby of the season on Monday night, building confidence ahead of Thursday’s decisive Euroleague game in Istanbul against Darussafaka.Maccabi registered its fourth straight win over all competitions to improve to 8-3 in the BSL, scoring 16 three-pointers for a second straight game after also punishing Brose Baskets Bamberg from beyond the arc in Euroleague action last Thursday.Taylor Rochestie was superb for Maccabi on Monday, scoring 28 points, including 6-of-7 three-point attempts, while also registering 10 assists.“It was definitely a team effort,” said Rochestie. “Our team came out ready to play in front of a hostile environment.We were ready and we deserved this win. We are trying to get better every single day so Thursday will be a good game.”Guy Pnini had 15 points thanks to five triples, with Brian Randle adding 13 points for Maccabi, which scored at 59 percent from distance.Maccabi was playing without Sylven Landesberg, Dagan Yivzori, Ike Ofoegbu and Dragan Bender and also lost Yogev Ohayon to an ankle injury in the first quarter. However, it controlled the contest almost from start to finish, holding a slender lead before clinching the victory with a 10-2 run (82- 66) in the fourth quarter.Maccabi built an early 12-point gap (20-8), but Hapoel trailed by just four points at the end of the first quarter.Jeff Allen’s basket kept Hapoel within single digits (46-37) at the half, but the hosts couldn’t complete a comeback and dropped to a painful defeat in front of their fans.“The most important thing about today’s victory is that we showed a lot of character,” said Maccabi coach Zan Tabak. “We showed a lot of strength because we played with just 6-7 players. We showed that we can count on the players in the more difficult moments.”Following Darussafaka’s (4-5) 94-66 loss at CSKA Moscow (8-1) on Friday, the yellow-and-blue can advance to the Euroleague Top 16 by beating the Turks by at least 11 points on Thursday. Any other result will send Maccabi to the Eurocup Last 32.“We will try and recover in this short period of time and try and go to Turkey to get the win,” said Tabak. “Since I came here every game is the most important game. I came here because I believe that we can build a good team.”Tre Simmons had 19 points for Hapoel, which dropped to 4-7 and continued its erratic season.“This wasn’t our defense,” said coach Sharon Avrahami, who has struggled to lift the team since replacing Oded Katash.“We had a tough time and Maccabi is in great shooting form. We were close at several stages but didn’t defend well enough to complete a comeback. All in all I think we played well and that we need to continue and improve our defense and we will be alright.”Also Monday, Maccabi Haifa improved to 6-5 with a 78-74 win over Maccabi Ashdod. Chanan Coleman led five Haifa players in double figures with 17 points, while Charles Thomas had 27 points for Ashdod (5-6).