Yellow-and-blue crushes Bnei Yehuda 4-0 behind another brace from Zahavi. 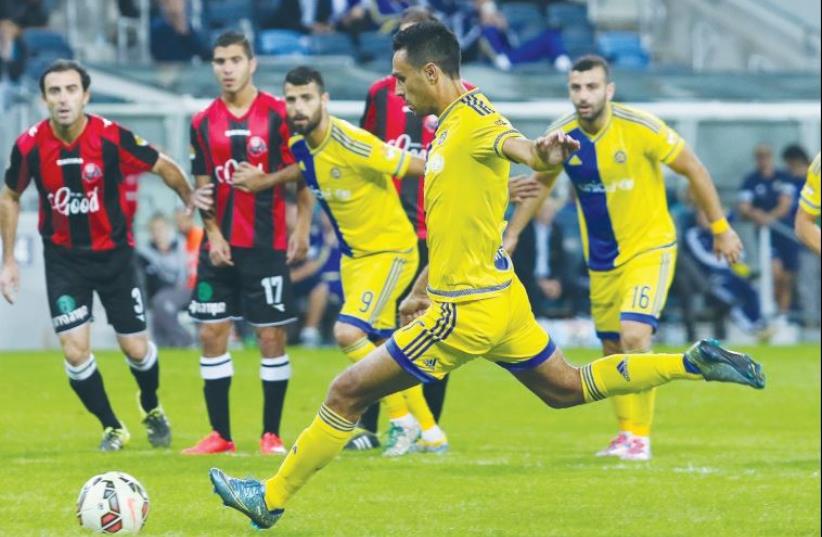 Maccabi Tel Aviv midfielder Eran Zahavi scored his 100th Premier League goal in a 3-0 win at Hapoel Haifa
(photo credit: ERAN LUF)
Advertisement
Maccabi Tel Aviv returned to the summit of the Premier League standings in emphatic fashion on Sunday night, thrashing Bnei Yehuda 4-0 in Netanya.After being frustrated in the first half, the three-time defending champion scored four times in 30 second-half minutes, reestablishing a two-point gap over Hapoel Beersheba.Eran Zahavi (69, 75) scored twice more to take his tally for the season to 12 goals in 12 matches after Shlomi Azulay netted the opener in the 55th minute and before Tal Ben-Haim wrapped up the scoring five minutes from time.“We made a great performance today from start to finish,” said Maccabi coach Slavisa Jokanovic. “We couldn’t score in the first half but in the second half we broke through and my players can be happy with what they did today.”Azulay was making just his second start for the team after struggling to break into the lineup following his move from Beitar Jerusalem in the summer. He repaid Jokanovic with a goal and two assists, proving he is more than capable of contributing to the yellow-and-blue.“When I arrived at Maccabi I knew it would be tough to enter the team and I’m happy I played well today when I got my chance,” said Azulay.Zahavi was pleased with the team’s performance but is hoping for even better displays in the future.“I’m happy we played well today from start to finish,” said Zahavi. “This was our best performance in the league this season. This is the Maccabi I want to see and I hope we can even play better than this. There is no doubt we are improving.”Bnei Yehuda remained in ninth place after losing for the first time in five matches.“You could see the differences between the teams across the field,” said Bnei Yehuda coach Yossi Abuksis.“This is the first time that I felt we couldn’t match up with another team in the league. The players gave their best, but sometimes even your best isn’t good enough.”Abuksis compared the differences between the teams to those Maccabi encountered this season in the Champions League group stage.“Even Maccabi’s best isn’t good enough for the Champions League and it was the same for us today,” he explained. “The players fought in the first half but gave up in the second. Maccabi isn’t in our league. Our goal is to remain in the league. We are happy with our start to the season but we shouldn’t get carried away.”On Monday, Hapoel Tel Aviv visits Hapoel Acre. New Tel Aviv coach Guy Levy suffered a 3-0 drubbing at the hands of Maccabi Haifa in his first match at the helm last week and attempted to lower the expectations ahead of the clash with Acre.“All I can think of at the moment is being at a better place than we are today,” said Levy, with Hapoel currently sitting in the relegation zone. “We want to put some distance between ourselves and the dangerous area. That will satisfy us at the moment considering our current position. I’m not fantasizing about reaching the championship playoffs.”e prior to invoking Article 52, the committee’s recommendations are not legally binding.