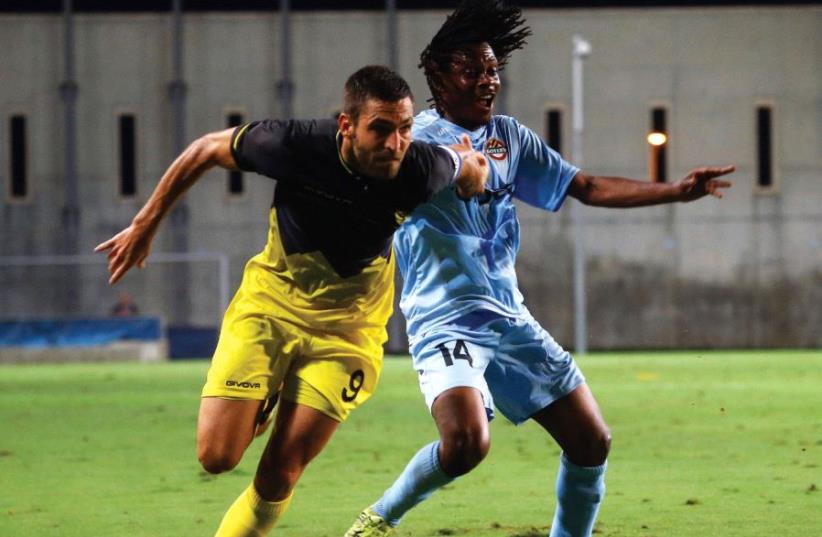 Beitar Jerusalem striker Itay Shechter (left) battles with Botev Plovdiv’s Meledje Omnibes during last night’s 1-1 draw in the first leg of the Europa League second qualifying round in Petah Tikva.
(photo credit: UDI ZITIAT)
Advertisement
Maccabi Tel Aviv is well placed to reach the Europa League’s third qualifying round after claiming a 3-1 win over KR Reykjavik of Iceland on Thursday, but Beitar Jerusalem faces an uphill battle in next week’s second leg following a disappointing 1-1 draw against Botev Plovdiv of Bulgaria.Maccabi was in trouble after falling behind in the 58th minute in Netanya. But three goals in 18 minutes ensured the yellow- and-blue is in the driving seat ahead of next Thursday’s return leg.Beitar got off to an ideal start in Petah Tikva, taking the lead through Tal Kahila’s header in the 11th minute. Jerusalem had plenty of chances to increase its advantage, but couldn’t find the back of the net once more and Plovdiv equalized through Serkan Yusein in the 73rd minute.“This is very disappointing. This isn’t the result we expected to register,” said Beitar coach Sharon Mimer. “We reached so many chances but we couldn’t convert them. I’m sure that if we reach the same amount of chances in the second leg we will win.”Also Thursday, Bnei Yehuda visited Trencin in Slovakia in a match which ended 1-1. Maccabi coach Jordi Cruyff was unhappy with the team’s performance and is hoping to continue and strengthen the squad in the coming weeks after already bringing in new Italian midfielder Cristian Battocchio earlier this week.“I don’t think the performance was good and I’m also not 100 percent happy with the result,” said Cruyff. “We conceded an unnecessary goal.We were sloppy in the game and lost a lot of balls.“We want to see a better performance, but we all understand that we are also going through a renovation in the squad,” added the new coach. “Some 7-8 players have left and so far we have brought in three. We are working hard to improve the squad. I hope we make the right choices and then we can really see a strong Maccabi.”After a meek performance in the first half, Maccabi found itself in real trouble when Palmi Palmason gave the visitors the lead in the 58th minute. The yellow and blue were caught napping on defense, with KR easily creating space on the left flank to allow Palmason to head the ball into the near corner.Cruyff wasted little time in making changes, bringing on strikers Aaron Schoenfeld and Barak Itzhaki in place of midfielders Shlomi Azulay and Avi Rikan.The gamble paid off, thanks in large to a helping hand from Icelandic goalkeeper Stefan Magnusson. He couldn’t control Ofir Davidzada’s cross from the left in the 65th minute, allowing Schoenfeld to equalize with the rebound from close range.Maccabi’s Icelandic striker Vidar Orn Kjartansson completed the comeback 14 minutes later, wriggling his way into space on the edge of the box before finding the bottom corner with a clinical finish.The hosts made it 3-1 three minutes later through Omer Atzily’s first goal for the team, but Maccabi knows it still has plenty of work to do in the second leg in Iceland.“They played well and were really compact and it was difficult to create chances,” said Kjartansson. “Because we didn’t score in the first half they punished us, but after they scored we played well. If they score the first goal next week it will completely open the tie so we need to make sure we are ready.”Thursday’s results: Europa League second qualifying round, first leg: Maccabi Tel Aviv 3, KR Reykjavik 1; Beitar Jerusalem 1, Botev Plovdiv 1; Trencin 1, Bnei Yehuda 1.