Finals were played across the country, including in Jerusalem, Ra’anana, Netanya, Kibbutz Gezer, Ramat Gan and Tiberius. 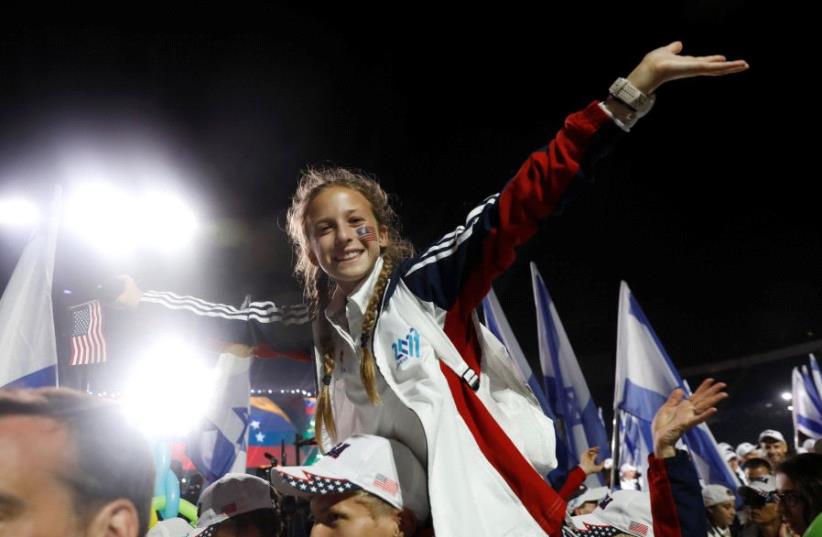 Delegations take part in the opening ceremony of the 20th Maccabiah Games, a quadrennial Jewish sports extravaganza which takes place in Israel, at Teddy Stadium in Jerusalem July 6, 2017.
(photo credit: RONEN ZVULUN / REUTERS)
Advertisement
The competitions of the 20th Maccabiah ended on Sunday night, with the Games to officially come to a close with Monday night’s ceremony in Latrun.Finals were played across the country, including in Jerusalem, Ra’anana, Netanya, Kibbutz Gezer, Ramat Gan and Tiberius.The star of the men’s soccer final in Givat Ram, Jerusalem was Jake Rozhansky, who scored a hat-trick for the USA in a 3-0 win over France.“They beat us in the group stage, but today we had a different mindset and tactics and it worked out,” said Rozhansky, who is entering his senior year at the University of Maryland.“I’m so happy. We got together only three weeks ago, but these guys are like my brothers now. I never thought the tournament would be like this. This is my first time in Israel and it has been amazing.”In the men’s basketball final, the USA defeated France 75-67 at Malha Arena in Jerusalem.Jeremy Lieberman led the USA with 16 points.“For the most part we did exactly what our game-plan was,” said the USA’s coach Doug Gottlieb, the basketball analyst who works for FOX Sports after tenures with ESPN and CBS Sports, and has also won a Maccabiah gold medal as a player.“It is more special to win as a coach. We became a real team.They love each other and fought for each other. The hospitality was wonderful and I’m looking forward to coming back in four years.”In the women’s basketball title game at Malha, the USA beat Israel 71-61 behind 29 points from Drew Edelman. Michal Asaf led Israel with 17 points.Israel also played the USA In the women’s soccer final. The hosts registered a 2-1 victory through goals by Eden Avital and Shani David.On Saturday, over 6,000 fans came to the Pais Arena in Jerusalem to see Canada claim the gold medal in the men’s ice hockey competition for a second straight Games, beating the USA 7-2 in the final. While the temperature outside was nearing 30 degrees Celsius, inside the arena it was a frigid 0 degrees, -12 on the rink that was especially constructed for the Maccabiah.The competition was sponsored by Jewish NHL owners Scott Malkin of the New York Islanders, Brian Roberts of the Philadelphia Flyers and the former owner of the Los Angeles Kings Joe Cohen, who were all in attendance.Over 7,000 competitors from 80 countries took part in 43 different sporting events in the latest installment of the so-called Jewish Olympics, with over 2,100 medals being handed out.The closing ceremony will be hosted by Israeli model Bar Refaeli, with Minister of Culture and Sport Miri Regev to mark the end of the Games by passing along the Maccabiah torch to a selection of athletes.