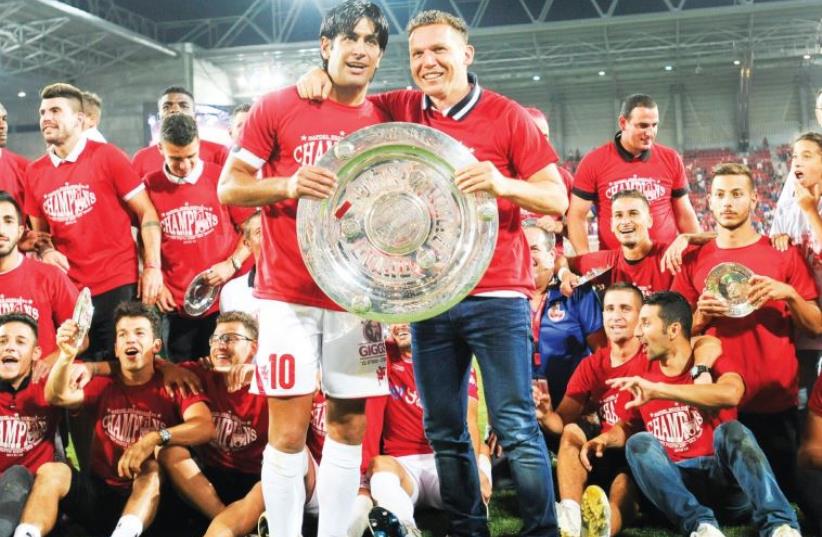 After winning a historic championship last season, Hapoel Beersheba, led by coach Barak Bachar (holding championship shield on the right) and captain Elyaniv Barda (holding shield on the left), begins its campaign to reach the Champions League group stage tonight at home against Moldovan side FC She
(photo credit: DANNY MARON)
Advertisement
After escaping with a 3-2 win from the first leg last week, Hapoel Beersheba aims to complete the job and advance to the Champions League third qualifying round when it visits FC Sheriff Tiraspol in Moldova on Tuesday.Beersheba needed a 90th-minute penalty by Maharan Radi to claim a tight win at Turner Stadium in a bizarre first leg during which the hosts were awarded three spot kicks, of which they converted two and missed one.Tiraspol played with 10 men from the 26th minute, but Beersheba is nevertheless fortunate to be taking a lead into the return leg in Moldova. Had it not been for some strange decisions in its favor by Spanish referee Carlos Del Cerro, Beersheba may have found itself in a far tougher position ahead of Tuesday’s encounter.Tiraspol took the lead in the 21st minute through Josip Ivancic, but the visitors were reduced to 10 men when Fidan Aliti was sent off five minutes later, with Del Cerro incorrectly penalizing him for a foul he didn’t commit.Beersheba midfielder Maor Buzaglo missed the subsequent spot kick, but John Ogu leveled the score before the break and Elyaniv Barda completed the comeback with a successful penalty five minutes into the second half.Sheriff managed to equalize through Josip Brezovec in the 64th minute before Radi’s late spot kick ensured Beersheba at least has a small edge entering the second leg.“We came back from a goal down against a very strong team and that isn’t easy,” said Beersheba coach Barak Bachar, focusing on the positives from the first leg. “We won and we have our fate in our own hands. We could have triumphed by a greater margin, but at least we won and I believe we will advance to the next round.”Greek champion Olympiacos awaits the winner in the third qualifying round.While Beersheba is playing in the Champions League qualifiers for the first time in club history, the six-time reigning Greek champion has participated in the group stage in the past five seasons, reaching the last 16 in 2013/14.Beersheba needs to overcome three rounds of qualifiers in all to reach the group stage, but first must get the better of Tiraspol to ensure its continental campaign doesn’t already end this week.Progress to the third qualifying round will mean Beersheba will at the very least enter the Europa League playoffs, a berth that is awarded to all the teams knocked out in the Champions League third qualifying round.Olympiacos hosts the first leg in Greece on July 26/27, with the return leg to be held a week later.Beersheba is playing in European competition for a third straight season, but it has been almost two decades since the last time it progressed in continental play in the 1997/98 season. Beersheba overcame Zalgiris Vilnius of Lithuania in the qualifying round before suffering an embarrassingly memorable 14-1 aggregate defeat to Dutch side Roda, which included a 10-0 loss in the second leg on the road.“I think we must put this win in context as I can’t remember the last time Beersheba won a match in Europe,” said captain Elyaniv Barda following the victory over Sheriff. “There are no easy wins in Europe.“We could have won by a greater margin and given ourselves a bigger advantage, but we played against an organized side with a tradition in Europe. They will have to come after us in the second leg and we will try and take advantage of that.”