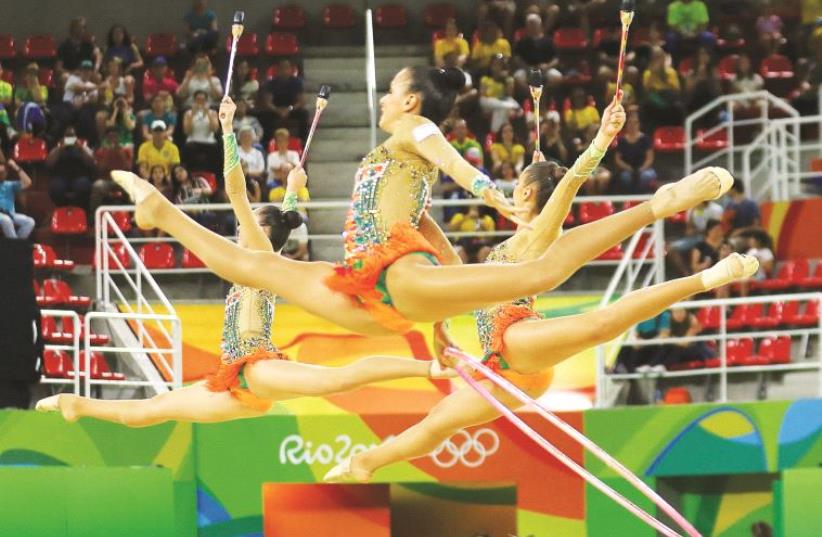 Israel's Olympic rhythmic gymnastics team
(photo credit: REUTERS)
Advertisement
The Israel delegation ended the Rio Olympics with two bronze medals after its final hope for another podium finish was dashed in the final day of action on Sunday.The rhythmic gymnastics national team ended the group all-around final in sixth place, equaling its best-ever finish from Beijing 2008, but falling short of a historic Olympic medal.Israel won two bronze medals in Rio courtesy of judokas Yarden Gerbi and Ori Sasson after failing to win any medals in London 2012. It is the third time the blue-and-white delegation has won two medals in a Games, the first since Athens 2004.The team of Yuval Filo, Alona Koshevatskiy, Ekaterina Levina, Karina Lykhvar and Ida Mayrin registered a score of 34.549 in Sunday’s final, 17.166 in the ribbons and 17.383 in the clubs and hoops. Russia won the gold medal, Spain took the silver and Bulgaria claimed the bronze.The squad’s achievement in Rio is especially impressive when considering that its mere participation in the Olympics was in serious doubt last month after head coach Ira Vigdorchik was reported to have kicked gymnast Levina during training, opening a can of worms that rocked local gymnastics. However, the team seemed unaffected in the qualifiers on Saturday and Sunday’s final, although Vigdorchik claimed that their preparations were derailed by the episode.“It really affected us, but we did our best,” she said. “We rose from the ashes. It is impossible to explain how problematic the past six weeks were.”Nevertheless, Vigdorchik said she was happy with the team’s performance in Rio.“I’m very pleased because simply reaching the final was very difficult,” she explained. “The competition was really tough. I always tell people that the Olympics are very different from any other competition, both from an emotional and political standpoint.Nevertheless, they reached the final and finished in sixth place among the best teams in the world.”Team captain Koshevatskiy, who was selected to carry the Israel flag in Sunday night’s closing ceremony, insisted that the team didn’t suffer as a result of all the bad blood that surfaced following last month’s revelations.“I have no words to explain what we experienced here,” she said. “We will never forget this experience. I’m proud of everything we achieved on our way to the Olympics and especially here in Rio.“I want to thank everyone who supported us. We did what we could. Last month’s mess didn’t affect us at all. I’m proud to represent Israel.”Vigdorchik said she would like to continue and coach the national team, but she has yet to receive an offer.“If the country wants me to continue it will ask,” she noted. “I want to continue and coach because that is what I love more than anything else in life. The question is, does the country want me or not? It is out of my hands.There is no doubting my love for the country.”Earlier Sunday, Marhu Teferi ended the men’s marathon in 74th place in a time of 2:21.06 hours. Tesama Moogas came in 121st place in 2:30.30h and Ageze Guadie finished in 122nd in 2:30.45h.Shlomi Haimy was the final Israeli to compete in Rio, ending the men’s mountain bike cross-country race in 29th place in a time of 1:43.40h.