Maccabi Tel Aviv and Beersheba face off tonight in Haifa for the final title of the 2014/15 season. 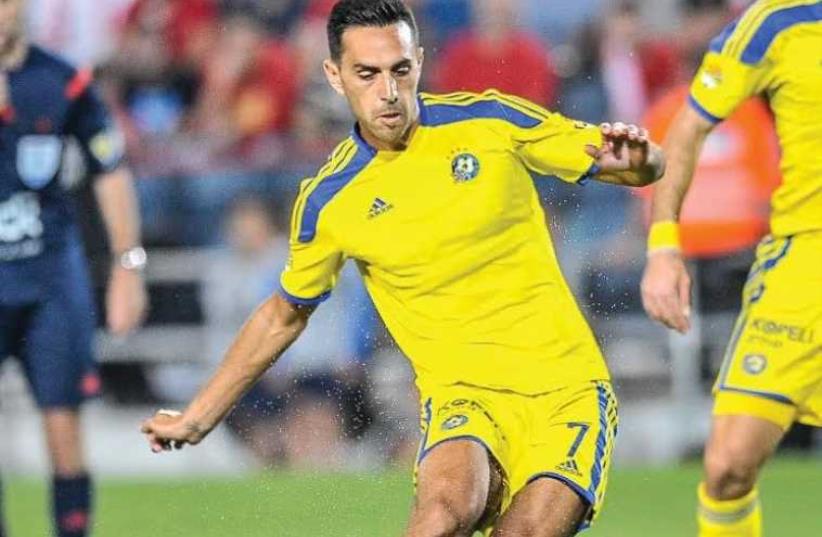 Maccabi Tel Aviv’s Eran Zahavi
(photo credit: ASAF KLIGER)
Advertisement
One way or another, history will be made in the State Cup final at Sammy Ofer Stadium in Haifa on Wednesday night.An unprecedented treble of local titles is on the line for Maccabi Tel Aviv, while Hapoel Beersheba is looking to win its first piece of silverware in 18 years.Maccabi wrapped up its third straight Premier League championship with a 2-1 win over Ironi Kiryat Shmona on Sunday, after already claiming the Toto Cup earlier in the campaign.The yellow-and-blue is bidding to become the first Israeli side to claim all three local titles in a single season, but faces a tough test against Beersheba. Elisha Levy’s side has improved to become Maccabi’s main rival for the title over the past two seasons, but is still without a trophy since lifting its one and only State Cup in 1997.Maccabi will be shorthanded in defense due to injuries and suspension.Regular starters Carlos Garcia, Sheran Yeini and Eitan Tibi are all likely out with injury while rising star Dor Peretz is suspended.That will force coach Pako Ayestaran to be creative with his backline and use one of the team’s midfielders in defense.Tel Aviv is also missing suspended midfielder Nosa Igiebor, but will welcome back star scorer Eran Zahavi from a one-match absence and is confident of claiming its first State Cup since 2005, which was also the last time it played in the final.“It is a great opportunity for us,” said Pako, whose future at the club remains up in the air. “We have won two titles, but we have got a tough contender in front of us. They have shown during the season that they can beat us and we have shown we can beat them. I think the teams arrive at the final quite even.”Beersheba and Maccabi have met four times in league action this season, with each team winning once at its home stadium and two of the encounters ending in draws.Beersheba coach Elisha Levy has only one real injury concern ahead of Wednesday, with Maor Melikson a doubt after suffering an injury in Saturday’s 4-0 thrashing at the hands of Maccabi Haifa at Sammy Ofer.Captain Elyaniv Barda will also undergo a late fitness test, but is expected to start for Beersheba, which last appeared in the final in 2003.“To win the cup with my boyhood club would be a very emotional moment for me,” said Barda.The Beersheba squad was rocked last week when club owner Alona Barkat revealed that Levy will not be continuing next season. The announcement, especially due to its timing six days before the final, has clearly been a distraction, but Levy isn’t looking for any excuses.“Maccabi deserved to win the championship, but we start a new game on Wednesday,” Levy said. “We will do everything in order to bring joy to the Beersheba fans.”Levy is hoping to end his three-year tenure in Beersheba on a high.“I’m leaving with my head held high. I’m proud of what I achieved,” he said.“We transformed Beersheba from a bottom club to a top club. It has been 18 years since Beersheba last won the cup and we want to end that drought.”