Costing $2.5 million to construct, the gymnasium comes as a result of donations from both Israel and abroad. 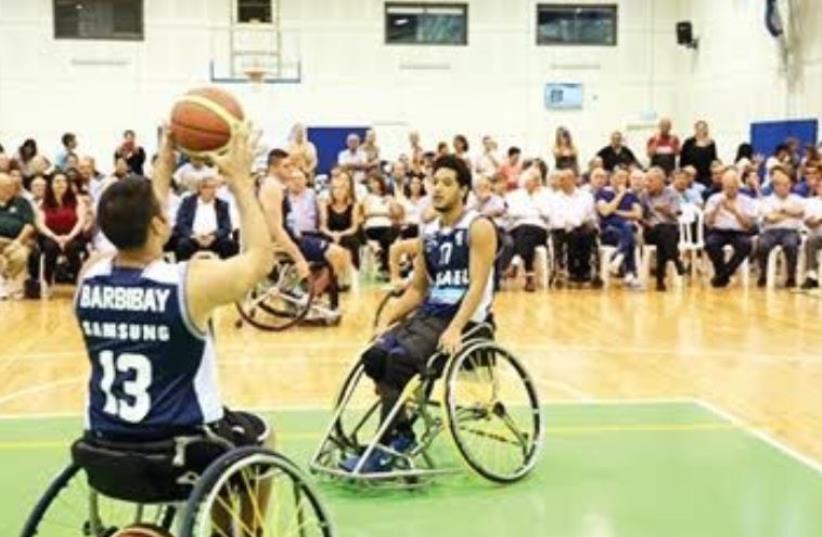 Wheelchair basketball players
(photo credit: CHEN GALILI)
Advertisement
In a poignant event attended by over 300 guests, Sunday saw the opening of the new Wheelchair Sports Gymnasium at the Israel Sport Centre for The Disabled (ISCD) in Ramat Gan.The sport center, already one of the largest of its kind in the world, now contains a gymnasium that will be home to six wheelchair basketball teams, four wheelchair rugby teams, blind goalball teams, and more.The ceremony was attended by guests including Israeli Paralympic medalists Noam Gershony and Inbal Pezaro, mayor of Ramat Gan, Israel Zinger, and MKs Karen Elharar and Michal Biran.Minister for Sport Miri Regev was set to attend, but unable to do so due to the current security climate.The event featured a range of performances and speeches, including a wheelchair basketball tour de force from some of players who will be using the gymnasium, and a moving speech by Elharar in which she stated, “These people deserve more and it’s finally the time that they got the glory that they deserve.”Costing $2.5 million to construct, the gymnasium comes as a result of donations from both Israel and abroad.Before the ceremonial ribbon cutting to mark its opening, the building’s main donor, American Morris Silverman, said: “It is my honor and privilege to help disabled children and youth, and athletes from all over the country, to be introduced to the wonderful notion of sports and rehabilitation.”The center also aims to serve as a venue for positive Arab-Israeli interaction, with Israel Paralympic Committee President Daniel Ben Abou noting in his remarks that “people have found their home here. It takes away stress from the rest of the country and everything that’s going on in Israel.”A similar sentiment was expressed by executive director of the ISCD and former Paralympic medalist Boaz Kramer. Speaking to The Jerusalem Post amid many congratulatory pats on the back following the ceremony’s conclusion, Kramer commented on the power of disabled sport to bring people together.“I think disabled sports can serve as a great tool of rehabilitation for everybody who has a disability, no matter what their background, because it’s the gateway to a successful life and integrating into society,” said Kramer.