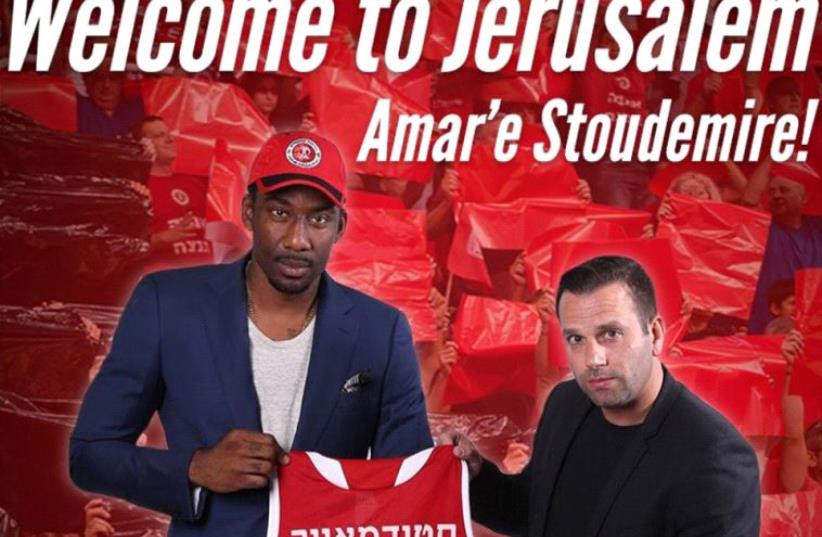 Amar'e Stoudemire and Ori Allon
(photo credit: COURTESY HAPOEL JERUSALEM)
Advertisement
It was hanging in the air for some time, but that made Monday’s announcement that Amar’e Stoudemire has signed for Hapoel Jerusalem no less stunning.The six-time NBA All-Star, who retired from the NBA last Tuesday, agreed to a twoyear deal with Hapoel, of which he has held a small ownership stake since the summer of 2013 and the purchase of the club by the ownership group led by Ori Allon.The 33-year-old forward had said in the past that it would be “great” to play for Jerusalem due to his connection with the city and Israel. Stoudemire claims he has Jewish roots on his mother’s side and has visited Israel in the past, including for the 2013 Maccabiah.“This is a very emotional decision for me,” Stoudemire said on Monday at a press conference in Madison Square Garden in New York. “Because at this moment I’m going to uproot my family. It has been pretty stable in the United States and now we will be moving to a different country where we have never lived before.“It is also a spiritual journey for us,” he added. “Playing for Jerusalem allows me to take care of my spiritual journey and continue my professional career. My wife and I always talked about living abroad and being able to experience different cultures, and what better culture to experience for us than living in Jerusalem. I’ll be playing for a team that we have a chance to not only win a domestic title, but to also win the Eurocup title and those are the goals for us in Jerusalem.”Stoudemire retired last week after signing a one-day contract with the New York Knicks. He played 14 NBA seasons, including 41/2 campaigns with the Knicks. He had his best seasons with the Phoenix Suns and also played for the Dallas Mavericks and Miami Heat.The 6-foot-10 (2.08-meter) Stoudemire averaged 18.9 points and 7.8 rebounds in 846 career games. He was voted to two All- NBA first teams and was also named 2003 NBA Rookie of the Year after entering the league directly from high school.“My career has been a successful career.For most part it was a great career,” Stoudemire said. “This moment is a dream come true. I will be playing for Hapoel Jerusalem, a team I have been looking forward to playing for and a team looking forward to my arrival.”Once looked at as one of the most athletically- gifted forwards in the league, Stoudemire’s NBA journey was derailed by chronic knee problems that date back to the beginning of his fourth season. His production saw a rapid decline over the past few years, particularly last season with Miami, where he averaged just 5.8 points and 4.3 rebounds in 14.7 minutes. It was the first time he scored less than 10 points per game in a season.Nevertheless, Stoudemire insisted he is arriving in Jerusalem in top shape.“I was healthy all season and my body felt great,” he said. “I wanted to retire from the NBA on a healthy note and I was able to accomplish that.”Jerusalem has undergone a complete overhaul this summer after suffering a shock defeat to Maccabi Rishon Lezion in the BSL final last season. Italian coach Simone Pianigiani was brought in and Americans Curtis Jerrels, Travis Peterson, Jerome Dyson, Tarence Kinsey and Shawn Jones were all signed. Yotam Halperin, Lior Eliyahu and Bar Timor will be back for another season and remain the team’s Israeli backbone, which has been strengthened by the arrival of Isaac Rosefelt.“Amar’e is the best player ever to come to Israel,” said Allon. “It wasn’t so hard to convince him. It was a decision that came from him.I’m not afraid to set high standards. We have been the best team in Israel in the past 2-3 years and with Amar’e and the new staff and roster we can achieve success in Europe.”Stoudemire summed up his thinking at the end of a letter published on The Players’ Tribune, titled “This Isn’t Goodbye.”“The Scripture speaks about Jerusalem as a holy place, and I can feel that whenever I’m in the city. This is a chance for me to be a better husband and a better father, to help me lead my family into righteousness.The opportunity to play there, and grow as a player and person, is a blessing.“As my father used to tell me, “The sky’s the limit. Time to soar.”TNS contributed to this report.