Nevo clocked a time of 4:04.68 minutes to finish in third place, a mere five hundredths of a second ahead of Richard Nagy of Slovakia. 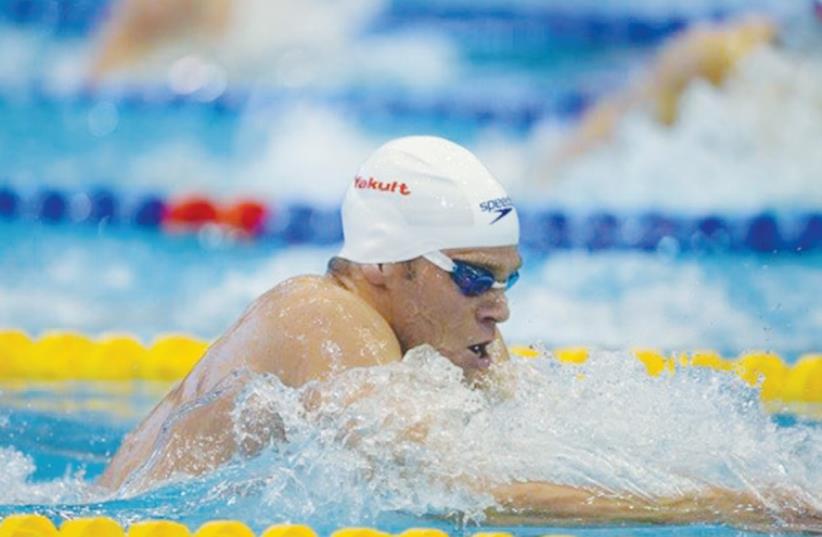 Israeli swimmer Gal Nevo claimed a bronze medal yesterday in the 400-meter individual medley final at the European Short Course Swimming Championships at the Wingate Institute in Netanya.
(photo credit: ISRAEL SWIMMING ASSOCIATION)
Advertisement
The Israel delegation made it two medals in as many days at the European Short Course Swimming Championships at the Wingate Institute in Netanya on Thursday, after Gal Nevo claimed a bronze medal in the 400-meter individual medley final.Nevo clocked a time of 4:04.68 minutes to finish in third place, a mere five hundredths of a second ahead of Richard Nagy of Slovakia.David Verraszto of Hungary won the gold medal in a time of 4:02.43m, with Roberto Pavoni of Great Britain finishing in second (4:02.69m).The 28-year-old Nevo won his seventh career medal at the short course continental championships, also scaling the podium in the 400m IM in 2009, 2011, 2012 and 2013.“This was the most special swim of my career,” said an emotional Nevo, who was watched from the stands by his wife and two-week-old baby girl. “This was a very powerful experience. I ran out of energy towards the end but the fans pushed me forward. I have never experienced anything like this in my career. It feels very different to the medals I won in the past.”Nevo will aim to add a second medal to his tally when he takes part in the 200m IM on Friday, an event in which he took bronze medals in 2011 and 2012.Yakov Toumarkin won Israel’s first medal in the championships on the opening day on Wednesday, taking a silver medal in the 200m backstroke.Israel’s Amit Ivri and Andrea Murez will also be targeting a place on the podium when they take part in their respective finals on Friday.Ivri advanced to the 100m IM final with the third fastest time (59.34s), while Murez set a new Israeli record of 52.88s in the 100m freestyle on her way to the final.