New police unit to crack down on sports violence

Violence at soccer matches has grown to be a national concern as some fan clubs like Beitar Jerusalem’s La Familia have gained notorious reputations for racist chants and violent outbursts. 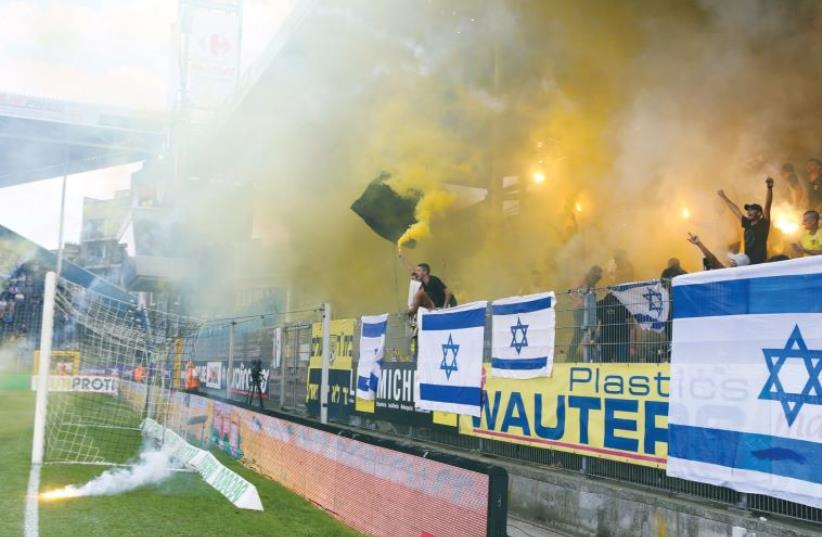 The behavior of Beitar Jerusalem fans in the Europa League qualifier in Charleroi, Belgium last Thursday has resulted in owner Eli Tabib putting the club up for sale
(photo credit: UDI ZITIAT/BSL,ADI AVISHAI)
Advertisement
A special police unit has been established to prevent violence in sports, focusing on the prevalence of violence at soccer matches.Culture and Sport Minister Miri Regev met Monday with Public Security Minister Gilad Erdan, who agreed to fund the unit. It will begin operating at the start of the soccer season next month.Formation of the unit and its operations will be based on an examination of violence in sports, conducted by Culture and Sport Ministry Director- General Yossi Sharabi.The unit will gather intelligence centering on the causes of violence and incitement at sporting events and bring indictments against suspected offenders.Regev said the establishment of the unit signals a new “zero-tolerance” policy.Erdan said the unit is necessary to put an end to the violent behavior of some soccer fans.“The police unit will combat the phenomenon of violence in sport at full power,” he said. “We will not allow sports fields to become violent and life-threatening.”Nevertheless, both Erdan and Regev drew a distinction between the general soccer fan population and the instigators of violence. “All of these measures are designed to target the generators of violence without harming the rest of the fans and general public that loves sports,” Regev said. “Fans are the beating heart of sports, they are not the problem, they are the solution.”According to a Maariv report online on Tuesday, Beitar Jerusalem fans are incensed at their club ownership, which is requiring ticket buyers to supply personal information, including their passport number and a photo, to attend a club match in Cyprus this week.“There is a crisis of confidence between the club and the audience,” the Beitar Fan Association said.“We are your fans, not potential criminals.”Violence at soccer matches has grown to be a national concern as some fan clubs like Beitar Jerusalem’s La Familia have gained notorious reputations for racist chants and violent outbursts.Last October fans of the Israel-Arab team Bnei Sakhnin rioted following a loss to Beitar Jerusalem, and in April over 200 police officers were needed to secure a match between Maccabi Tel Aviv and Bnei Sakhnin.