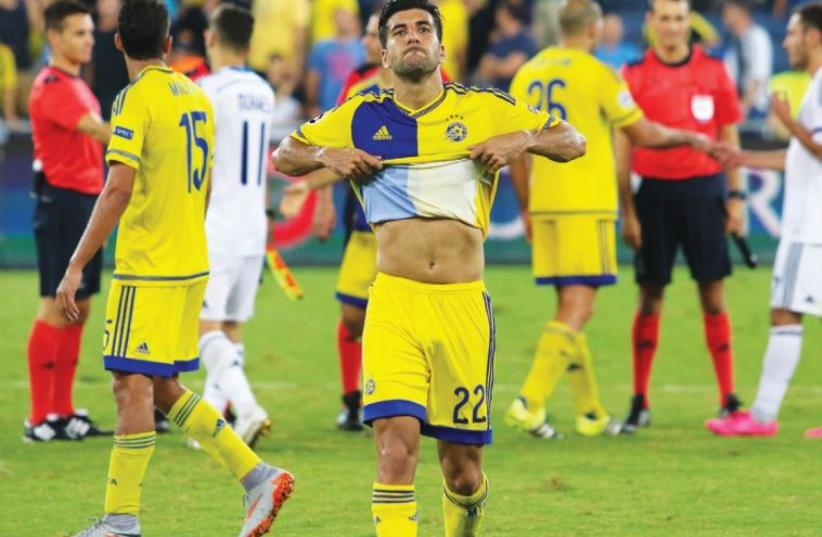 Maccabi Tel Aviv defender Avi Rikan couldn’t hide his frustration after the yellow-and-blue was once more outplayed in the Champions League group stage on Tuesday night, suffering a 2-0 defeat to Dynamo Kiev at Haifa Stadium
(photo credit: ERAN LUF)
Advertisement
The disappointment following the 2-0 defeat to Dynamo Kiev at Haifa Stadium was palpable, but a quick look at previous Israeli participation in the Champions League group stage reveals that Maccabi Tel Aviv is only following a pattern set by its local predecessors.Maccabi remained in last place in Group G with zero points and a 0-6 goal difference after being outplayed for a second straight match, following the 4-0 defeat to Chelsea in its group opener at Stamford Bridge.While the drubbing in London against the English champion was almost treated as a given, the three-time reigning Israeli champion entered Tuesday’s encounter truly confident of kick-starting its campaign.However, even the team which was considered to be the weakest of Tel Aviv’s opponents in a group which also includes Porto had little trouble brushing aside the yellow-and-blue, an extremely pessimistic indication ahead of the remainder of the campaign.Even though Maccabi still has four more matches to play, coach Slavisa Jokanovic was already faced with questions regarding the prospect of the team joining the 2009/10 Maccabi Haifa as the only sides ever to end the group stage without picking up a point or scoring a goal.The significant gaps in quality between Maccabi and its opponents and the fact the team now faces back-to-back games against Porto, which beat Chelsea on Tuesday, before hosting the English champion and visiting Kiev, seem to leave little reason for optimism.Nevertheless, Jokanovic insisted he has not despaired.“In front of us are 12 points and we are going to fight for each point,” said Jokanovic after being asked about the prospect of joining Maccabi Haifa in ignominy. “After 11 years Maccabi once more realized this dream of playing in the Champions League and in front of us we have 12 points to fight for. It is very difficult [in the group stage] and we deserved more today. We probably deserved to score goals, but we must improve in the future.”Despite the setback, the Serb claimed he was pleased with his team’s showing.“We were dangerous but at the end we weren’t strong enough to score goals. I am not disappointed,” he said. “I’m happy with what my team did on the field, but the better team won.”The 2015/16 Maccabi is the fifth Israeli team to play in the group stage and its campaign so far has looked very similar to those of former local champions.The previous three Israeli sides to reach the groups all lost their first three matches, often in humbling fashion.The last Israeli club to qualify for the group stage was Hapoel Tel Aviv in 2010/11 and while it did manage to score in its second game in Group B, it lost its first three matches by a combined goal difference of 2-8, before finally drawing 0-0 with Schalke 04 of Germany and also beating Benfica of Portugal 3-0.The previous season’s Maccabi Haifa remains the only team to have ended the group stage without a point or a goal after losing all six of its matches by a combined goal difference of 0-8. The 2004/05 Maccabi Tel Aviv lost its first three contests by a 0-5 goal difference before beating Ajax of the Netherlands 2-1 and drawing 1-1 with Italy’s Juventus.The only Israeli side not to open with three consecutive losses was the first local team to qualify for the group stage. The 2002/03 Maccabi Haifa beat Olympiacos of Greece 3-0 in its second contest before also defeating Manchester United 3-0 and drawing 3-3 with Olympiacos in Athens to end Group F in third place with seven points and a 12-12 goal difference, which remains by far the best Israeli showing in the group phase.Maccabi was hoping to battle Kiev for third place and progress to the Europa League round of 32 this season, but Tuesday’s loss likely means it already only has pride to fight for.“I hope we can continue to progress in our next matches,” said captain Eran Zahavi. “We haven’t done very well so far, but we still believe we can compete at this level.”