Ori Sasson is ranked No. 5 judoka in the world. 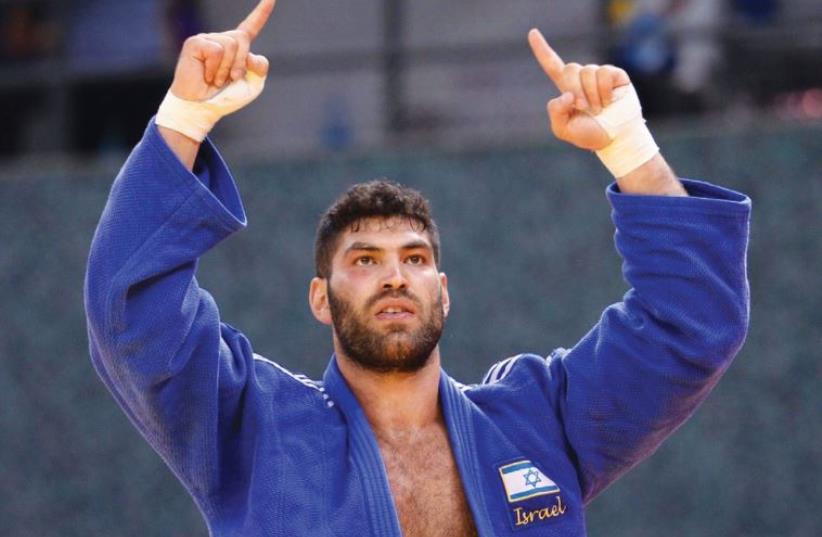 Israel’s Ori Sasson won a silver medal at the European Championships for a second straight year
(photo credit: OLYMPIC COMMITTEE OF ISRAEL)
Advertisement
Judoka star Ori Sasson defeated Egyptian opponent Islam el-Shehaby in the +100 kg division Friday afternoon at the 2016 Rio Olympics.Following his defeat, however, el-Shehaby refused to shake hands with the Israeli which led to booing from the crowd.

As he attempted to leave, el-Shehaby was ordered back into the center of the Judo mat by the referee and eventually gave a slight bow to Sasson. In response to the episode, International Judo Federation spokesman Nicolas Messner said that the organization will look into the incident and decide whether to take any action, according to Lebanese news agency Naharnet. "In the past, it is not sure that a fight between those two athletes would have taken place. This is already a big improvement that Arabic countries accept to be opposed to Israel," he said."There is no obligation for shaking hands at the end of the fight, but it is compulsory to bow, that's why the Egyptian was called back to bow and he did."Nevertheless, his attitude will be reviewed after the Games to see if any further action should be taken."Sasson is now one win away from claiming the delegation's second medal of the Rio Olympics after advancing to the semifinals following his win over Roy Meyer of the Netherlands.Coming into Rio, Sasson, 25, had earned a pair of Silver medals at the European Judo Championships in 2015 and 2016. The Israeli Judoka had also placed 2nd earlier this year at the World Masters in Guadalajara, Mexico.This was not the first time Israeli participants at the Rio Olympics have encountered such treatment since the start of the games.Joud Fahmy of Saudi Arabia failed to show up for her bout against Christianne Legentil of Mauritius in the first round of the women's judo under-52kg contest earlier in the week, in an apparent attempt to avoid facing Israel's Gili Cohen in the second round. Meanwhile, the Lebanese Olympic delegation was reprimanded by the International Olympic Committee following  a shocking incident  in which they refused to let the Israeli delegation board their bus to the opening ceremonies.As a result, according to the original Facebook post by Israeli sailing coach Udi Gal, event organizers tried to scatter the Israeli athletes on several different buses. He called this “unacceptable for security and representative reasons.”  During the hearing on the matter, the IOC committee warned Salim al-Haj Nakoula the head of the Lebanese delegation, that they would not accept any further instances like this. Allon Sinai contributed to this article.