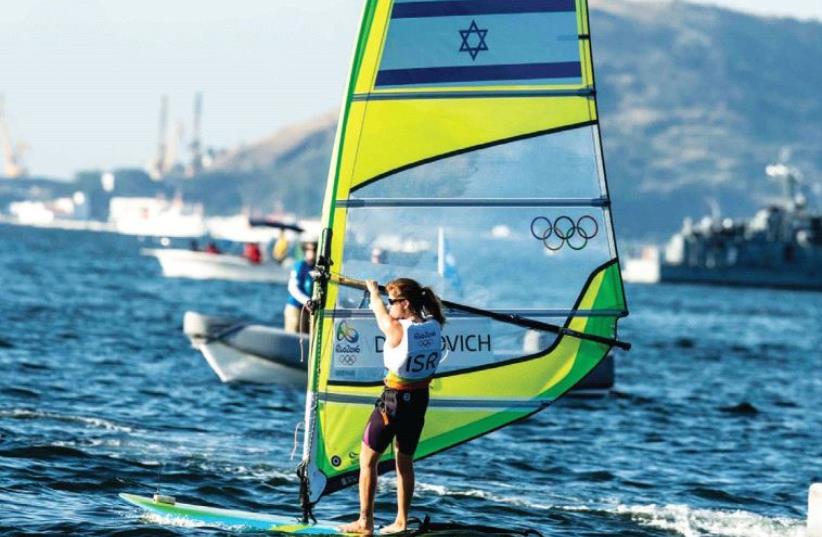 Windsurfer Maayan Davidovich came agonizingly close to winning Israel's 10th Olympic medal yesterday, but ultimately ended the RS:X event in seventh place overall, finishing the decisive medal race in ninth.
(photo credit: ASAF KLIGER)
Advertisement
Israel’s Maayan Davidovich missed out on an Olympic medal in painful fashion on Sunday, slipping to seventh place overall in the women’s RS:X windsurfing competition after ending the medal race in ninth position in Rio.Davidovich entered the decisive race in fifth place overall, tied with third and fourth positions, with the top two only five points in front.She had a chance to even claim the gold medal and got the medal race off to an excellent start, reaching the first marker in fourth place, only a few meters behind the leaders.However, she lost significant ground in the second leg, dropping all the way to sixth, 1:38 minutes behind first place. It only got worse from there, with Davidovich ultimately ending the medal race in ninth out of 10 to finish in seventh overall.Elsewhere, Israeli triple jumper Hanna Knyazyeva-Minenko took part in the women’s final early Monday morning.Knyazyeva-Minenko, a silver medalist at last year’s world championships and this year’s European Championships, ended the London 2012 final in fourth place while she was still representing Ukraine.Meanwhile, Maor Tiyouri ended the women’s marathon in 90th place out of 133 finishers, while Korlima Chemtai retired towards the end. Tiyouri clocked a time of 2:47.27 hours.Misha Zilberman became the first Israeli to win an Olympic match in badminton, beating Yuhan Tan of Belgium 2-0 (22-20, 22-12) on Saturday. Nevertheless, Zilberman, who improved to 1-1 in Group C, was knocked out of the event after Chen Tien Chou defeated Tan 2-0 (21-14, 21-8) to secure first place in the group on Sunday.Anastasia Gloushkov Leventhal and Ievgeniia Tetelbaum are ranked in 21st place out of 24 in the synchronized swimming duet competition after registering a score of 78.900 in the free routine on Sunday.Late Sunday evening, an official ceremony in memory of the 11 Israelis murdered at the 1972 Munich Olympics was held at the Palacio Da Cidade in Rio. The ceremony was organized by the Israel Olympic Committee, the Brazil Olympic Committee, the city of Rio and the local Jewish community