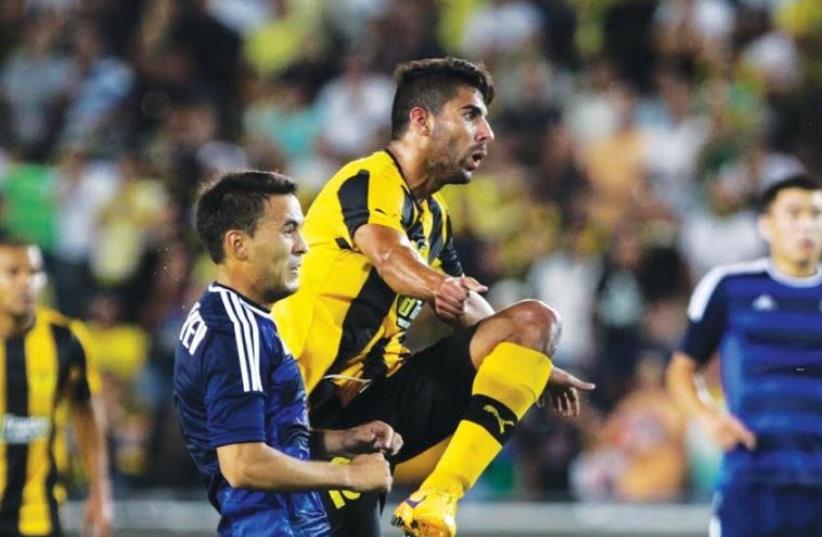 Beitar Jerusalem’s Liroy Zhairi
(photo credit: ADI AVISHAI)
Advertisement
Over 10,000 Hapoel Beersheba fans are expected at Teddy Stadium in Jerusalem on Thursday night as their team looks to claim its first win in European competition since 1997.With the work on the club’s new Turner Stadium still ongoing, Beersheba chose to host the first leg of the Europa League second qualifying round against Thun of Switzerland in Jerusalem.Also Thursday, Beitar Jerusalem visits Sporting Charleroi of Belgium in its first leg of the second qualifying round ahead of the return leg at Teddy next week.Beersheba was knocked out by RNK Split in the Europa League second qualifying round last season in what was its first European tie in 17 years. However, it enters the new campaign brimming with confidence after adding some impressive pieces to its squad over the summer.After seeing its Premier League championship challenge come up short in each of the past two seasons, Beersheba went on a spending spree while also making a change at the coaching position by bringing in Barak Bachar to replace Elisha Levy.Beersheba maintained the core of last season’s squad while signing Maharan Radi, Ben Sahar, Anthony Nwakaeme, Matan Ohayon and Shir Tzedek. Radi and Tzedek are set to start on Thursday, with Sahar and Nwakaeme likely to be available from the bench.Beersheba faces a tough test against Thun, which finished in fourth place in the Swiss Super League last season and reached the group stage of the Europa League in 2013/14.Beitar survived a nervy finish to win its first European tie in 15 years last Thursday, beating Ordabasy Shymkent of Kazakhstan 2-1 at Teddy to claim an aggregate victory by the same scoreline in the first round of the qualifiers.Beitar didn’t impress in its first match in continental competition in seven years the previous week, drawing 0-0 in the first leg in Kazakhstan.However, the goalless deadlock put it in a promising position ahead of the return leg at Teddy and Beitar set up a meeting with Charleroi, which finished in sixth place in the Belgian league last season.“You must remain focused and make sure that you mark your player when they attack,” Beitar coach Slobodan Drapic told his players. “They will be aiming to finish off the tie and will pressure us across the field. You need to play with calm and responsibility.”Ironi Kiryat Shmona will enter the Europa League in the third qualifying round, which will be followed by a playoff round for a place in the group stage.The draw for the third qualifying round of the competition will be held on Friday.Maccabi Tel Aviv reeling from Malta setback Meanwhile, new Maccabi Tel Aviv coach Slavisa Jokanovic slammed his players for their lack of passion in Tuesday’s embarrassing 2-1 defeat at Malta’s Hibernians in the first leg of the Champions League second qualifying round.Maccabi can make amends by overturning the deficit in the second leg at Bloomfield Stadium next Tuesday, but the defeat in Malta to a team that hadn’t won in European competition since 2002 will not be forgotten any time soon.“We didn’t deserve to win.Hibernians played better than us with much more passion and ambition and they deserved the victory,” Jokanovic told the club’s website.“We will have to make some changes going into the next match and it’s impossible to win if we don’t play with passion.Maccabi has some great players and they will have to step up to the plate and show their qualities during the next game. We talked a lot about the good things from last season but in football you can’t rest on your laurels.”The Serbian was likely hinting to the fact that Maccabi has made just one signing so far this summer, adding veteran defender Tal Ben-Haim.“We are very disappointed.We played against a decent club, but we had to win this match,” said Ben-Haim. “We will need to play much better in the next match and I’m sure that we will do just that.”