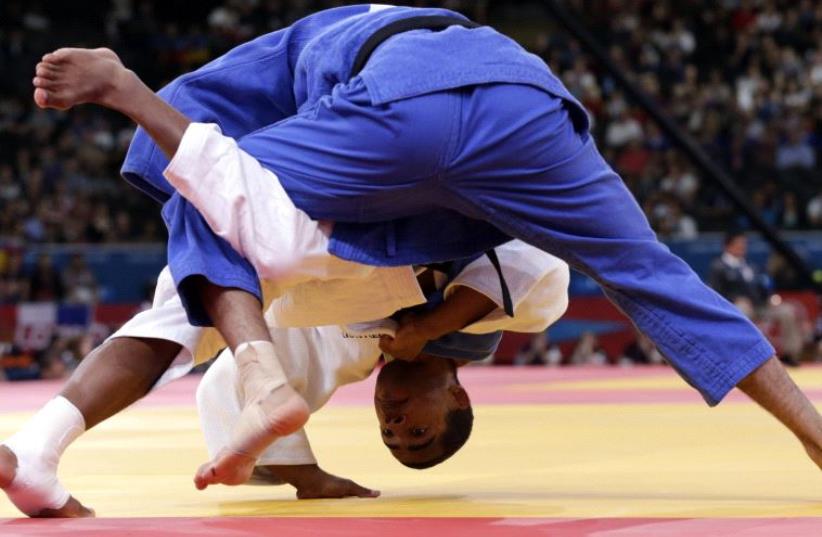 France's David Larose fights with Israel's Golan Pollack (blue) during their men's -66kg elimination round of 64 judo match, at the London 2012 Olympic Games July 29,
(photo credit: REUTERS)
Advertisement
Two of Israeli judo’s big guns go in search of Olympic glory on Sunday.World Judo Championship bronze medalist Golan Pollack aims to repeat his surprise accomplishment from last year when he competes in the under-66 kilogram event, facing Mathews Punza of Zambia in the first round.Pollack joined an exclusive list of local judo greats last year when he became just the sixth Israeli to claim a medal at the World Championships.His success in Astana, Kazakhstan was unexpected, but he backed it up with medals on the Grand Prix circuit and in the World Masters in Guadalajara, Mexico in May, earning a place in the top eight in the world rankings and an important berth as a seed in Rio.Gili Cohen, who competes in the women’s under-52kg contest, enters her first Olympics on Sunday on the back of an excellent season. She scaled the podium in three different Grand Prix events while taking a gold medal at the Grand Slam competition in Baku, Azerbaijan in May.That saw her climb into the top 10 in the world rankings.Cohen received a bye into the last 16 in Rio where she awaits the winner of the first round contest between Christianne Legentil of Mauritius and Joud Fahmy of Saudi Arabia.Elsewhere Sunday, Israel’s top swimmer opens his account in Rio when Yakov Toumarkin takes part in the 100-meter backstroke heats.The 24-year-old registered the best-ever finish for an Israeli swimmer at the London 2012 Olympics, ending the 200m backstroke final in seventh place. The 100m back is Toumarkin’s secondary event, and he could only manage 24th place in London four years ago. However, even should he fail to be among the top 16 who qualify for the semifinals, his result on Sunday will give an indication of the form he’s in ahead of his main event, the 200m back on Wednesday.Sunday will also see Amit Ivry enter the pool once more.Ivry takes part in the 100m breaststroke heats after competing in the 100m butterfly on Saturday.Andrea Murez, who has struggled with sinusitis, participates in her first individual event on Sunday, the 100m backstroke.Late Saturday, Dudi Sela became the first Israeli tennis player since Gilad Bloom in 1992 to take part in the men’s singles event at the Olympics.Sela, ranked No. 65 in the world, faced Damir Dzumhur (76) of Bosnia in the first round.Elsewhere Sunday, the oldest member of Israel’s delegation realizes a life-long dream. The 37-year-old Shani Bloch, who was the first Israeli woman to take part in the Tour de France, Giro d’Italia and World Championships, becomes the first Israeli road cyclist to participate in the Olympics since 1960. Bloch retired 12 years ago to start a family, giving birth to three daughters. She returned to competition just two years ago.