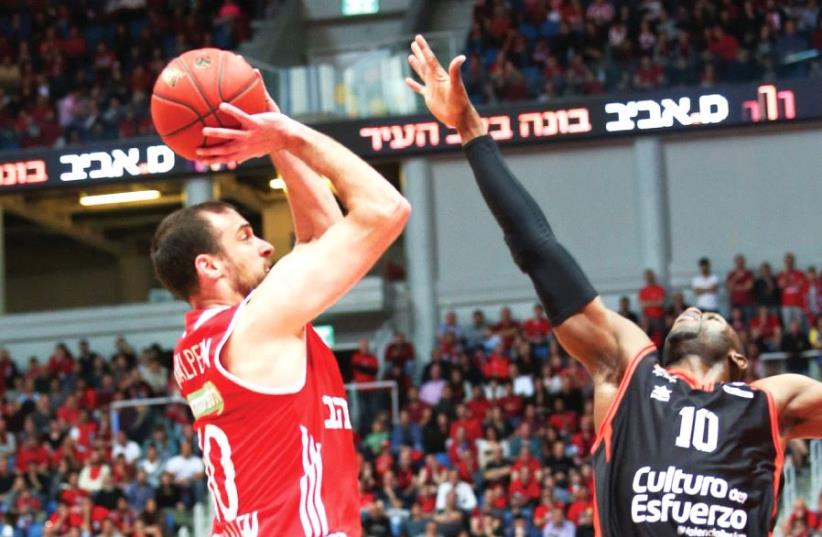 Hapoel Jerusalem captain Yotam Halperin (left) aims to build on his impressive performance in Game 2 of the Eurocup semifinals when the team visits Romain Sato (right) and Valencia and in the decisive contest of the series tonight in Spain.
(photo credit: DANNY MARON)
Advertisement
A win over Valencia in Spain on Wednesday will not only send Hapoel Jerusalem through to the final of the Eurocup, but will likely also leave an indelible mark on the future of the club.Hapoel enters the third and decisive game of the semifinals at Fuente de San Luis Arena in an optimistic mood after tying the best-of-three series at 1-1 with an impressive 79-66 win in Jerusalem on Friday.Valencia is one of the Eurocup’s most dominant home teams, beating Hapoel 83-68 in Game 1 of the series to improve to 9-1 at home on the season. But that only loss was to Jerusalem in the regular season, a contest played over five months ago, but one that nevertheless boosts the confidence of Hapoel’s roster.Game 1 was tight until the fourth quarter, with Hapoel still within two points with seven-and-a-half minutes to play. It was a similar story in Game 2, with Jerusalem clinching the victory by going on a 14-3 run to end the contest.Valencia’s record at the Fuente de San Luis Arena has made it one of the competition’s most successful teams, with the Spaniards claiming the title in 2010 and 2014 and aiming to reach the final for the fourth time in eight years on Wednesday.Hapoel, which is playing in the semifinals for the first time since 2006, hasn’t played in a continental final since its one and only European triumph back in 2004 when it beat Real Madrid to claim the ULEB Cup.Everyone at Hapoel is well aware that the club has a golden opportunity to lift another continental title this season, with Jerusalem to have home-court advantage in the final against Malaga, which will also be played in a best-ofthree format, should it advance.As if Wednesday’s game wasn’t important enough for Jerusalem, its result may also end up shaping the club’s upcoming seasons.The team that wins the Eurocup title will be handed a berth in the Euroleague next season. But even a place in the final could end up proving to be enough to convince the Euroleague to give Jerusalem a place among the continent’s top sides next season, a development which would significantly increase the club’s income as well as its expenses, requiring Jerusalem to build a far deeper and stronger roster.But while the ramifications of Wednesday’s game are clear to everyone, Hapoel owner Ori Allon is insisting on remaining focused on simply winning the series decider.“We can do this. This is a team that we can compete with,” said Allon. “Regardless of what happens from now on we have had an amazing European campaign.”Nevertheless, Allon understands that it may be a while until the club has another chance like this to win a continental title.“We are going to Spain with the target of winning there. We believe we are the better team,” added Allon. “All the players came up to me and told me that they think we are better. As we will also have home-court advantage in the final, this is an opportunity to go all the way. And this team is capable of that.“We will definitely reach the Euroleague one day. I’m not concerned whether it will be next year or in two or three years. What I want right now is to win at Valencia, reach the final and take a European title. It won’t be easy, but we can do it.”