Defending champion on verge of clinching top seed in playoffs after winning an eighth straight game. 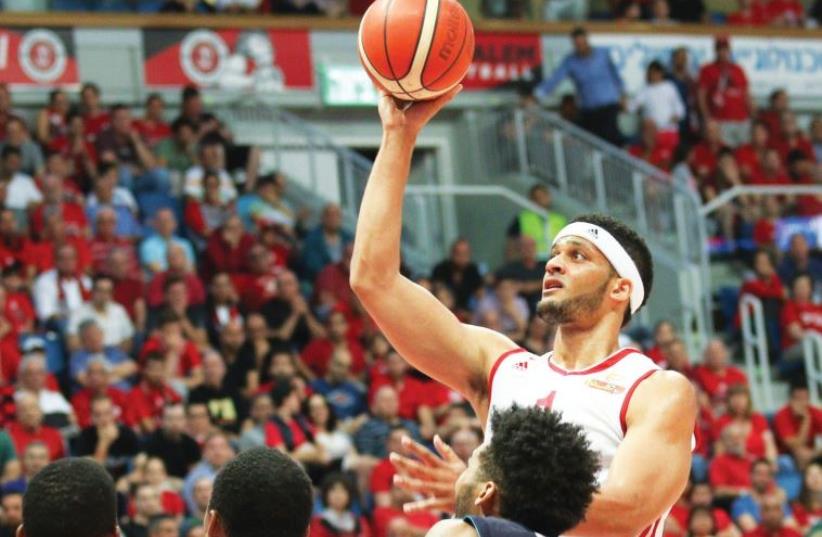 Hapoel Jerusalem forward Josh Duncan (right) had a game-high 21 points in last night’s 96-81 win over Hapoel Eilat at the Jerusalem Arena.
(photo credit: DANNY MARON)
Advertisement
Hapoel Jerusalem needs only one more win to clinch the No.1 seed in the BSL playoffs after registering its eighth consecutive victory with a dominant performance against Hapoel Eilat at the Jerusalem Arena on Sunday night in a repeat of last season’s final.Jerusalem claimed a 96-81 triumph, its fourth in a row by double digits, and with four more games to play, the defending champion is all but certain to finish the regular season in first place.Hapoel can secure the top seed as early as Tuesday should Maccabi Tel Aviv (20-9) lose to Maccabi Kiryat Gat (10-19), with Jerusalem holding the tiebreaker against Tel Aviv, sweeping the yellow-and-blue 3-0 in the regular season.While the BSL title will be decided in a Final Four tournament this season, there is still some importance to claiming the top seed, with the team that finishes the regular season in first place to host the season finale.Eilat (16-14) had won seven of eight games entering Sunday, but a 16-2 Jerusalem run in the second quarter gave it a stranglehold on the game (47-28) it would maintain until the final buzzer.Josh Duncan led Jerusalem with 21 points in 21 minutes, with Donta Smith adding 17 points and seven rebounds.Khalif Wyatt finished with 18 points for Eilat.While Jerusalem and Maccabi are set to be the top two seeds in the playoffs, the battle for the No.3 and No. 4 seeds, who will also have home-court advantage in the best-of-five playoff quarterfinals, looks set to go down to the wire.Only one-and-a-half games separate Maccabi Haifa (17- 13) in third and Bnei Herzliya (15-14) in sixth, with the latter having an opportunity to close within a single point with a win over Maccabi Rishon Lezion (13- 16) on Monday.Haifa has lost four of six games after falling to an 82-81 overtime defeat to Ironi Nahariya on Sunday.Nahariya (16-13) is only halfa- game back of Haifa after building on its victory over Maccabi Tel Aviv last week, winning by a single point for a second straight game.Gilbert Brown led five Nahariya players in double figures with 19 points. Alex Chubrevich scored 19 points for the slumping Haifa.Hapoel Tel Aviv edged closer to booking its place in the playoffs, improving to 14-16 with an 87-86 win at Ironi Ness Ziona (10-20) despite having Nate Robinson ejected in the third quarter.Hapoel claimed its third straight win after Ness Ziona’s Tal Dan missed at the buzzer, allowing Robinson to breathe a huge sigh of relief. After treating Hapoel Holon fans to an obscene gesture with his middle finger as he walked off the floor at halftime of last week’s heated encounter, Robinson was involved in controversy yet again on Sunday, clashing with Ness Ziona’s Mitchell Watt with 2:30 minutes to play in the third quarter, earning both players an ejection.Raviv Limonad and Tre Simmons finished with 18 points each for Hapoel, as Sundiata Gaines had 23 points for Ness Ziona.