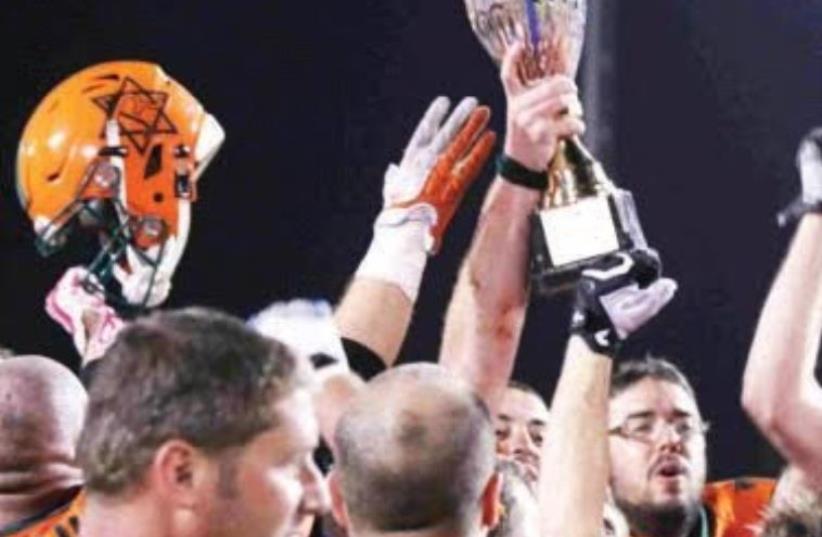 Israel Football League
(photo credit: DOTAN DORON)
Advertisement
The Judean Rebels completed a successful championship defense in the Kraft Family Israel Football League over the weekend, overcoming a slow start to defeat the Tel Aviv Pioneers 32-14 in front of almost 1,000 fans in Petah Tikva.Tel Aviv started the title game off with a nice drive, capped by a 30-yard touchdown pass from quarterback Ronny Moscona to Nimrod Pintel for an early 6-0 lead. The Rebels answered with a scoring drive of their own, with Cole Kiser hauling in a 35-yard touchdown reception to tie the game at six.Moscona found Pintel again for a TD and a 14-6 Pioneers’ advantage that was cut to 14-8 when the Rebels’ Uria Loberbom sacked Moscona in hid own end zone for a safety.Judean quarterback Dani Eastman ran in a score to give the Rebels their first lead of the game, at 16-14, and after a scoreless third quarter, Eatsman found Gideon Reiz for a 20-yard scoring pass to make the score 24-14.After the Pioneers fumbled the ensuing kickoff, the Rebels recovered the ball and Eastman ran in another icing-on-thecake TD with seven minutes left to make it 32-14, which stood up as the final score.Eastman, who received game MVP honors, finished 17-of-34 passing for 180 yards and two touchdowns, adding 87 yards and another pair of TDs on the ground.The Rebels are now tied with the Tel Aviv/Jaffa Sabres for the most titles in IFL history (three), while the Pioneers now hold the record for most Israel Bowl appearances (five).