Over 30,000 ran through the capital's streets on Friday, hitting a record of participants in the 42 km challenge. 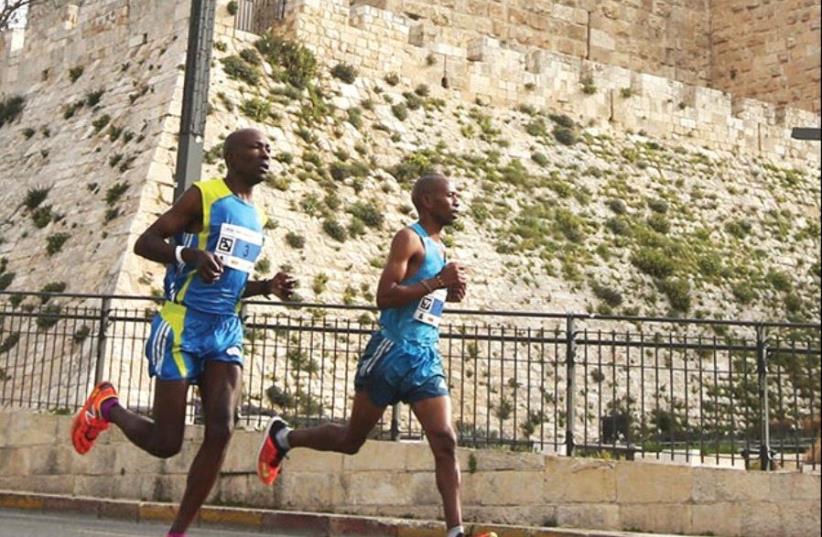 RUNNERS PASS by the walls of the capital’s Old City during Friday’s seventh annual running of the Jerusalem Marathon.
(photo credit: MARC ISRAEL SELLEM)
Advertisement
A record of over 30,000 people took part in the seventh Jerusalem Marathon on Friday, with Kenya’s Shadrack Kipkogey winning the full race at 2:17.36 hours, his second straight victory.Emily Chepkemoi of Kenya was the first woman to cross the finish line, clocking a time of 2:49.25 hours.Almost 3,000 police officers, working in coordination with the Jerusalem Municipality and private security personnel, were out in increased numbers due to threats from members of the haredi community that they would attempt to disrupt the marathon.Approximately 40 haredim were stopped for questioning on various streets near the marathon’s path.Around 3,500 of the participants were international competitors, coming in from more than 65 countries.“The fact that we broke a record for number of overseas participants in the year in which Jerusalem is celebrating 50 years since it was reunited is proof of Jerusalem’s might and of the international prestige of the marathon,” said Mayor Nir Barkat.The route began in the western part of the city, between the Knesset and Israel Museum, looping around the Givat Ram campus of Hebrew University and through several neighborhoods on the way up to Hebrew University’s Mount Scopus campus.The route then descended to the Old City, taking runners through Jaffa Gate and the Armenian Quarter and out through Zion Gate, before ending in Sacher Park.