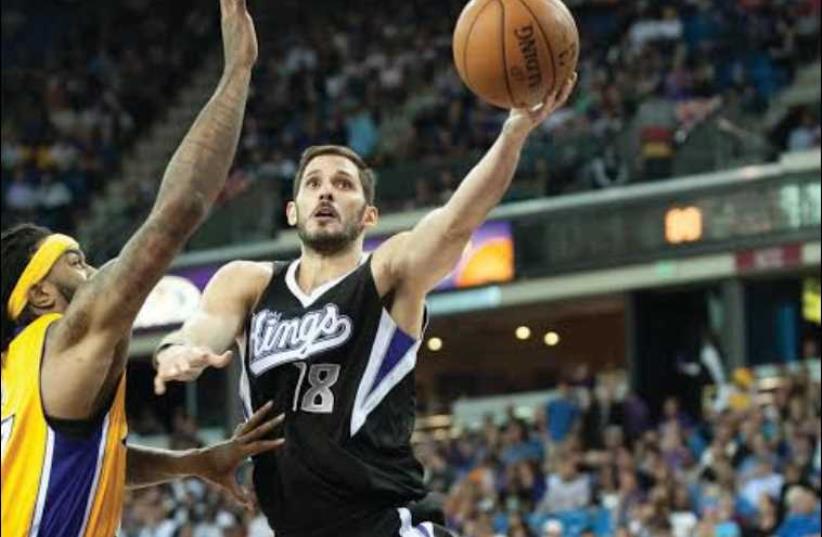 Israeli NBA star Omri Casspi
(photo credit: REUTERS)
Advertisement
Israeli forward Omri Casspi will reportedly be traded to the New Orleans Pelicans as part of a blockbuster deal which will also see All-Star DeMarcus Cousins leave the Sacramento Kings.In exchange, the Kings will receive Buddy Hield, ‎Tyreke Evans, Langston Galloway, a 2017 first-round pick and 2017 second-rounder.Casspi has struggled with injuries this season, averaging 5.9 points and 4.1 rebounds in just 22 games.The 28-year-old, who hasn't played since January 13, will be out of contract at the end of the season, completing a two-year $6 million deal. Casspi kick-started his faltering NBA career in Sacramento over the past three seasons, rejoining the Kings in the summer of 2014 after he was traded away by Houston and waived by the Pelicans.He will be hoping New Orleans decides to keep him this time and give him an opportunity to play with what is set to be one of the best big-men combinations in the league. The Pelicans are confident they can eventually re-sign Cousins to a contract extension, pairing him for the long term with last night's All-Star Game MVP, Anthony Davis.Davis was informed of the trade as he walked away from the podium following his MVP performance, greeting the news with a smile and a big thumbs-up."This is an unbelievable weekend," Davis told ESPN's Jeff Goodman."All-Star MVP and now getting Boogie. It doesn't get better than this." Cousins, who is averaging 27.8 points and 10.6 rebounds, played just two minutes in Sunday night's All-Star Game.Cousins traveled with Casspi to Israel in 2015 as part of a joint initiative between NBA Cares and the Omri Casspi Foundation.