The Israeli women also advanced to both of Sunday’s finals in Stuttgart, in the ribbons and the clubs and hoops. 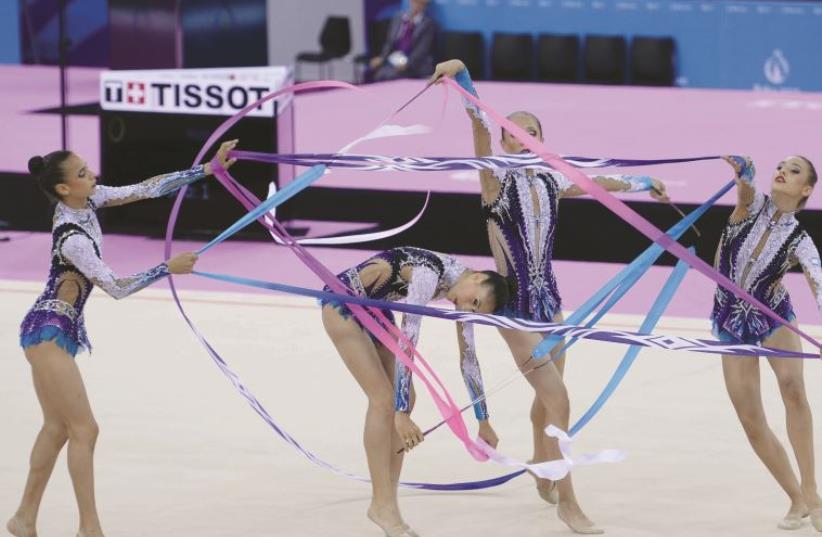 Israel’s national rhythmic gymnastics team booked its place in the Rio Olympics
(photo credit: OCI)
Advertisement
Israel’s national rhythmic gymnastics team secured its place at the Rio Olympics on Saturday, joining Neta Rivkin who did so a day earlier after ending the individual all-around final at the World Championships in Stuttgart, Germany in seventh place.The team of Yuval Filo, Alona Koshevatskiy, Ekaterina Levina, Karina Lykhvar and Ida Mayrin finished the group all-around final in sixth position on Saturday, recording an overall result of 34.283 points, 17.333 in the ribbons and 16.950 in the clubs and hoops.The top eight in the competition all officially booked their place at the 2016 Olympic Games. The Israeli women also advanced to both of Sunday’s finals in Stuttgart, in the ribbons and the clubs and hoops.The team ended the all-around final at last year’s Worlds in an impressive fifth place while also taking a silver in the clubs final.The Israelis won three medals at the European Championships in Baku, Azerbaijan earlier this summer, claiming a silver in the all-around final, a silver in the clubs and hoops and a bronze in the ribbons.The Israel roster was rebuilt at the start of last year with the goal of reaching the Olympics for a third straight time in Rio 2016. The previous national teams advanced to the final at Beijing 2008 and London 2012.Rivkin will participate in her third consecutive Olympics next summer after recording her best-ever finish at the Worlds on Friday.The 24-year-old registered an overall score of 70.974 in the final, 17.900 in the hoop, 17.833 in the ball, 17.925 in the clubs and 17.316 in the ribbon.“This is one of the most emotional moments of my career,” said Rivkin.“I have realized another dream. This is my best finish in the seven years in which I have competed at the World Championships and I’m delighted.”Israel’s Victoria Filanovsky also aimed to qualify for the Olympics by finishing in the top 15, but she could only manage a 21st-place finish.The 20-year-old registered 66.532 points, 16.533 in the hoop, 16.916 in the ball, 17.283 in the clubs and 15.800 in the ribbon.