Sela ousted in five sets in first round of French Open 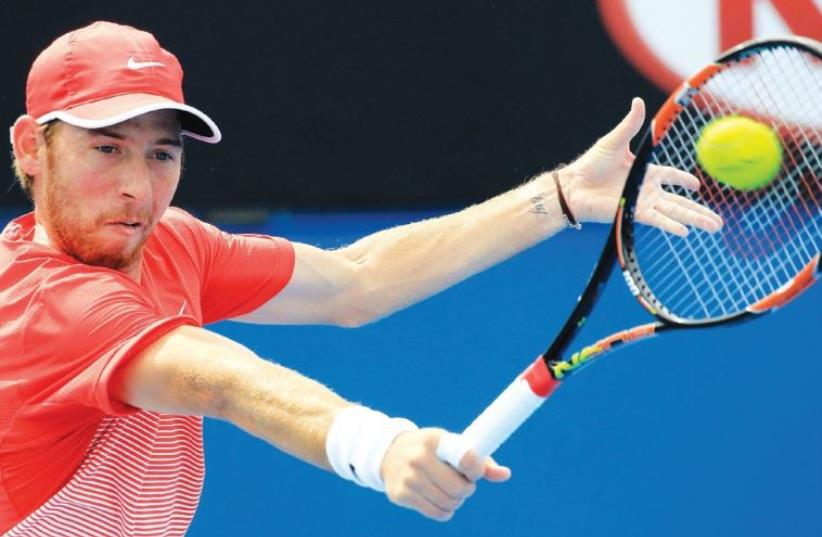 ISRAEL’S lone competitor in the singles draw at the French Open, Dudi Sela
(photo credit: REUTERS)
Advertisement
Dudi Sela suffered his sixth firstround exit in eight career appearances at Roland Garros on Monday, dropping to a 6-7 (5), 6-4, 7-6 (5), 4-6, 6-4 defeat to Dustin Brown of Germany in their rain-delayed encounter in Paris.Sela, ranked No. 62 in the world, entered the second day of the match trailing qualifier Brown (116) 6-7 (5), 6-4, 7-6 (5), with the score in the fourth set tied at 1-1.The 31-year-old Israeli No. 1 was down 15-40 on his serve in the third game when play had to be stopped for the day on Sunday. Sela immediately dropped his serve on Monday, but bounced back to win the fourth set and force a decider. However, he continued to struggle on his serve in the fifth set, being broken three times on the way to a painful loss.Sela was the lone Israeli in the singles tournaments at Roland Garros, with Amir Weintraub and Julia Glushko both coming up short in the qualifiers last week, while Shahar Pe’er is out injured.Meanwhile, defending champion Stan Wawrinka dazzled the moment he walked on to a gloomy Philippe Chatrier Court wearing a fluorescent yellow shirt but his play only occasionally matched his attire as he flirted with a humbling first-round exit on Monday.The 31-year-old third seed was left in the shade by straight-hitting Czech Lukas Rosol for much of their firstround clash but finally came to life to win 4-6, 6-1, 3-6, 6-3, 6-4.It was touch and go for a while, though, as Rosol, who famously beat Rafael Nadal in the Wimbledon second round in 2012, threatened another huge upset on a damp and dreary day that began two hours late because of heavy rain.“A really tough match, the conditions were slow and heavy,” Wawrinka, relieved to avoid becoming the only defending French Open men’s champion in the professional era to lose in the first round, told reporters.“He kept me under pressure permanently. I kept running after the score. You can’t really relax.”It was that kind of day, one for grit over style and Spain’s fourth seed Garbine Muguruza, a Wimbledon finalist last year, showed plenty as she too avoided an early exit.Wearing a long-sleeved top like most of the women players, the flat-hitting Spaniard took a while to find her game but eventually ground past Anna Karoline Schmiedlova 3-6, 6-3, 6-3.“It was so cold. Even though I was running and playing, I felt like cold. I thought it was going to rain. I was looking to the sky,” Muguruza told reporters.Russian Svetlana Kuznetsova, champion 10 years ago, also toiled away to beat Yaroslava Shvedova as the seeds, apart from a few exceptions such as seventh seed Roberta Vinci, flourished.The first-round match of men’s second seed Andy Murray was suspended on Monday night with the Scot surprisingly trailing qualifier Radek Stepanek. The Czech veteran claimed the first two sets by a 6-3 score, before Murray bounced back to win the third 6-0 and take a 4-2 lead in the fourth before dim light stopped play.Some advanced to the second round with a flourish, namely second seed Agnieszka Radwanska of Poland and Romania’s Simona Halep, the sixth seed.Halep, beaten by the currently suspended Maria Sharapova in the 2014 final, beat Japan’s Nao Hibino 6-2, 6-0 while Radwanska, looking to go beyond the quarterfinal for the first time, dispatched Serbian Bojana Jovanovski 6-0, 6-2.Vinci was crushed 6-1, 6-3 by Ukraine’s Kateryna Bondarenko.It was a shock-free day in the men’s draw with a batch of seeds moving through, led by No. 5 Kei Nishikori.The Japanese, a semifinalist in Madrid and Rome in the build-up to Roland Garros, followed Wawrinka on to Chatrier with his job already half done against Simone Bolelli.He carried on where he left off before rain halted play on Sunday, easing to a 6-1, 7-5, 6-3 victory.He was joined in the second round by eighth seed Milos Raonic and 16th seed Gilles Simon who delighted the hardy home fans by beating Brazil’s Rogerio Dutra Silva 7-6 (5), 6-4, 6-2.Viktor Troicki ended the hopes of former top-10 player Grigor Dimitrov.The soggy start to the tournament has highlighted the pressing need for a retractable cover over the main Philippe Chatrier Court, and tournament director Guy Forget offered some encouragement on Monday as rain bucketed down at the historic venue.It might be a while though, with 2020 now the likely completion date for a controversial 400-million euro project that also includes the expansion of the grounds.The redevelopment plans, dating back to 2009, have taken various forms and been subject to repeated planning delays.At one stage a new venue was proposed, but then scrapped in favor of expansion of the existing site, hemmed in by roads, a motorway and expensive residential real estate in the west of the French capital.“Welcome to France. You know the circumstances as well as I do. The red tape in France. It’s a process,” Forget told a news conference on Monday.“All we can do is monitor the situation and follow the due process.”The latest delays are the result of concerns about the impact on a set of 19th century greenhouses, even though they will now be incorporated into the project rather than knocked down as once planned.The greenhouse controversy stands in the way of the construction of a new, sunken court, which needs to be built before a roof can go on Chatrier.“This is central Paris, and I’m sure that you too are appreciative of the unique charm of the location,” noted Forget. “We know that the players and their teams are delighted to be 10 minutes away from the Champs-Elysees or next to the Bois de Boulogne or next to nice shopping areas. There are some constraints that come with that.”Reuters contributed to this report.